The flash release of the Eurozone PMIs for June will be on investors’ radar on Friday at 0800 GMT. After the European Central Bank chief, Mario Draghi, gave his clearest indication yet on Tuesday that more stimulus could be on the way, the PMI data will be watched closely for possible signs that Eurozone growth is stagnating again. In the meantime, there is some relief for the euro as the Federal Reserve makes an even bigger dovish turn than the markets were anticipating, pushing the US dollar down.

The Eurozone’s economy may have expanded by a solid 0.4% quarter-on-quarter in the first three months of the year, but the second quarter is already proving more challenging. Rising trade tensions and slowing growth in other parts of the world are weighing on the bloc’s economy, particularly Germany’s, which is heavily exposed to China. The Bundesbank (Germany’s central bank) recently said it expects the German economy to contract slightly in the second quarter. The ECB is all too aware of the risks to growth and inflation and has been forced to backtrack on its normalization plans, and even contemplate loosening policy soon.

The flash PMIs for June should complete the data for the second quarter and give some idea how the euro area performed during the period. The manufacturing PMI is forecast to edge up slightly from 47.7 to 48.0, though being below 50, that would still represent a decline in activity in the sector. The services PMI is expected to stay unchanged at 52.9, while the composite PMI, which combines both the services and manufacturing sectors, is also forecast for no change at 51.8, suggesting no improvement in overall economic activity in June. 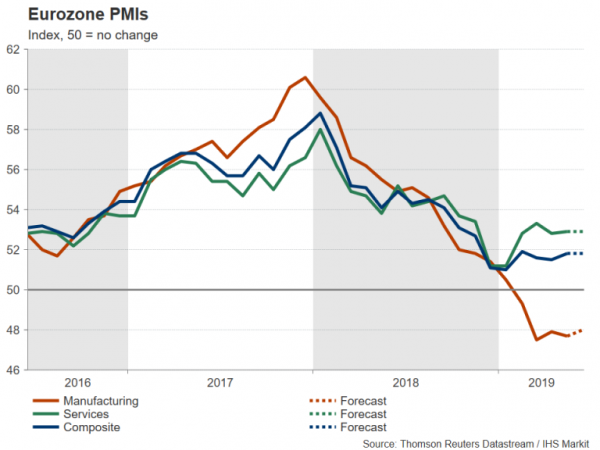 Although such PMI readings alone are unlikely to alarm ECB policymakers, when taken into consideration with falling inflation, the central bank risks a further delay in lifting inflation to its target of close to but below 2%. More worrying for the ECB is the sharp drop in inflation expectations since late last year, so without a significant acceleration in growth, neither market-based expectations nor actual measures of inflation are likely to rise.

Draghi does a U-turn

Mario Draghi may only have a few months left in his term as President but appears ready for a major policy U-turn. Speaking in Portugal at the ECB’s annual Central Banking Forum earlier this week, Draghi told the audience “In the absence of improvement, such that the sustained return of inflation to our aim is threatened, additional stimulus will be required”.

The euro initially fell on Draghi’s remarks but was able to rebound as the Fed later also signalled that it could ease policy soon. With the ECB having less bandwidth than the Fed to cut rates and purchase additional bonds, the single currency may not see the same degree of downside as with previous times the Bank eased policy if the Fed is cutting rates simultaneously.

In the immediate term, the euro could come under some selling pressure if the PMIs miss expectations by a big margin. The June low of $1.1179 is the critical support to watch that could break the euro’s current upswing. However, should the PMI numbers impress and point to a steady growth picture, the euro could extend its positive momentum to reclaim the $1.13 handle and challenge the recent top $1.1347.