The development of trends in FX markets relies on the aggregation of institutional order flow to drive a currency or currency pair in a particular direction. Many new traders often find themselves on the wrong side of these moves and typically spend a lot of time in a trap known as “fighting the flow.”

The Forex market has a highly decentralised structure meaning that unlike stock exchanges, there is no physical location for the recording of order flow. Consequently, information on these flows is restricted to bank and larger institutional players. To put this in a simpler context: Bank and institutions are able to track portions of order flow in the market but the individual retail trader cannot.

To understand the importance of this imbalance we can refer to a report produced by the Bank of International Settlements which sought to establish the value of studying client flows in FX.  The report, which was published in 2013 but revised in 2016, looked at a number of different aspects including what it is that characterises different FX customer groups (e.g., are they contrarian investors, do they take on risk or hedge against it, do they speculate on trends?) and whether large dealers possess an advantage from their ability to view a large percentage of customer trades?

In terms of establishing the predictive value of the various segments of client flow, the report concluded that:

The conclusion here is that the flow of Institutional players e.g., Banks and Hedge Funds represents a significantly superior alignment with future pricing than that of Corporate and private flows.

So how can the retail trader take advantage of this information?

Fortunately, The CFTC compiles weekly Commitment of Traders data reports on the positioning of participants in the currency futures markets, data which translates directly into the spot FX markets.

The report is long and complicated for new traders, though fortunately many websites now present the data taken from those reports in neat visual graphics updated each week.

Essentially, given what we know about the power of institutional order flow as discussed in the BIS report it makes sense that we would look to trade in the same direction as these major institutions and essentially piggyback their order flow. 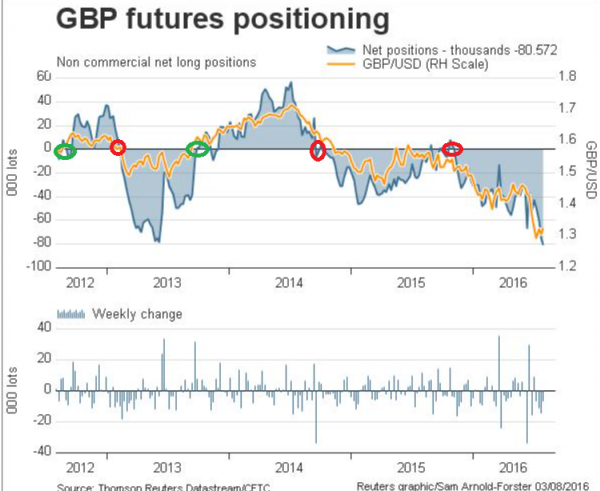 Of the eight times positioning crossed over 6 resulted in the development of a significant trend. This is incredibly valuable information to have, and the opportunities it can afford should be clear. Looking to trade in the same direction as Non-Commercial players can help individual traders catch major trends 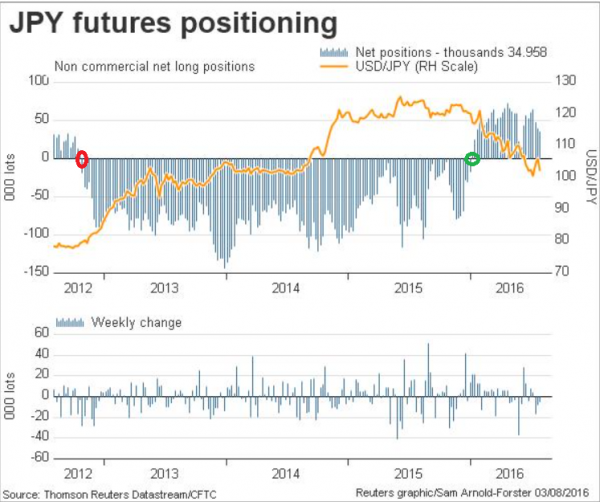 Another chart that clearly demonstrates the power of this data is the USDJPY chart showing the JPY positioning. This time, the data is inverted so the positioning tracks JPY but price shows USD movement. So if JPY positioning is going down,  as shown by the first red circle, then USD should be going up and vice versa

How To Use COT Data

COT data clear has great benefit as a sentiment tool for trades helping them to identify the directional bias of major banks and institutions. Checking the data each week to see how the institutions were positioned the prior week can be a good guide as to which direction you should be looking to trade, however, the data can be quite choppy week on week and in terms of identifying a strong signal it is best to use COT in three instances

As shown by the circles, when major institutions shift their bias (e.g., long to short, short to long) these tend to be key times for the market and can often be followed by the development of a significant trend.

The power of following a trend as denoted by positioning can be a fantastic asset to traders but of course, no trends last forever and so it is wise to be alert, though not neurotic, to potential reversal signals. One of the most reliable signals is when positioning moves into extreme levels which usually signals capitulation and exhaustion in the trend and highlights the likelihood of reversal.

Similar to what we discussed in point three, identifying divergent positioning can be another tell-tale sign of a potential reversal in the offing as institutions are displaying less interest in pursuing the move. 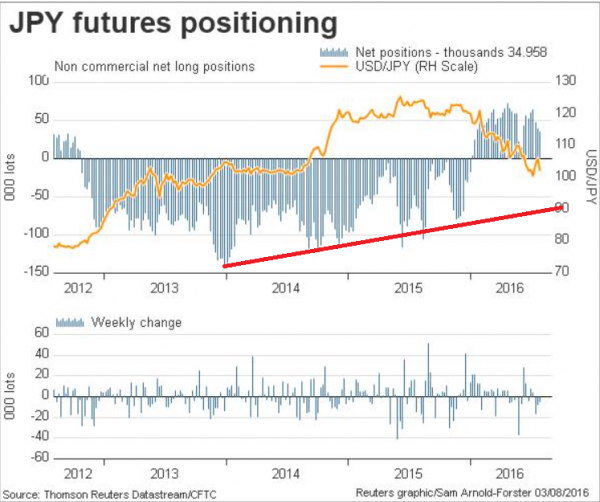 In this example, we can see that USDJPY is moving higher and higher but the actual build in JPY shorts is getting less and less indicating dwindling momentum before finally positioning shifts.

Issues To Be Aware Of

Whilst the data can indeed be a fantastic tool for helping traders establish directional bias in the market as well as identify period of potential reversal there are a few issues that we need to consider.

First of all the data is backdated meaning it tells us how institutions were positioned the prior week and not right now nor how they will be positioned in future.  However, if we are looking to trade with the trend and assume that institutions are following a directional path then it still provides a great guideline. However, as mentioned earlier, rather than using the data week on week look out for key developments such as a shift in positioning and extreme or divergent positioning.

Secondly, the data does not reflect the positioning of the entire Forex market. Whilst the data does a fantastic job of identifying trend and turning points there will be times when price doesn’t follow the data and we need to remember that the CFTC are only able to track a specific portion of the flow

And finally , it is important to remember that there is no magic wand in trading and no matter how fantastic a system or indicator or strategy appears, it all depends on how useful you find it.  That said, the COT data is a classic tool and is used by many hedge funds and systems traders as an information input for their strategies as well as being used by successful retail traders around the globe. If you can establish a way of using the data as a sentiment tool alongside managing your risk properly and developing a sound trading plan then the COT data can be an invaluable tool for helping you stay on the right side of the institutions and avoid “fighting the flow”

Currency Pair of the Week: DXY