The latest jobs report out of the United States is expected to hit the headlines on Friday at 1230 GMT. Following last month’s disappointing report, which fuelled expectations that the Federal Reserve will begin cutting rates soon, an anticipated bounce back in the number of jobs added in June could relieve some of the pressure on policymakers to ease policy aggressively. But as investors remain undecided about the degree by which the Fed will lower rates, the US dollar is susceptible to any big surprises in the data.

Nonfarm payrolls rose by just 75k in May, well below forecasts, sparking fears that the US economy is headed for a major slowdown. For June, the consensus forecasts are for a rebound of 160k jobs. However, after averaging 223k in 2018, the pace of jobs growth has slowed to 164k a month so far in 2019. The February figure was also weak (56k) and while risks of a recession remain low, a cooling labour market will not help the Fed reach its 2% inflation target, especially as wage growth has also been moderating in recent months. 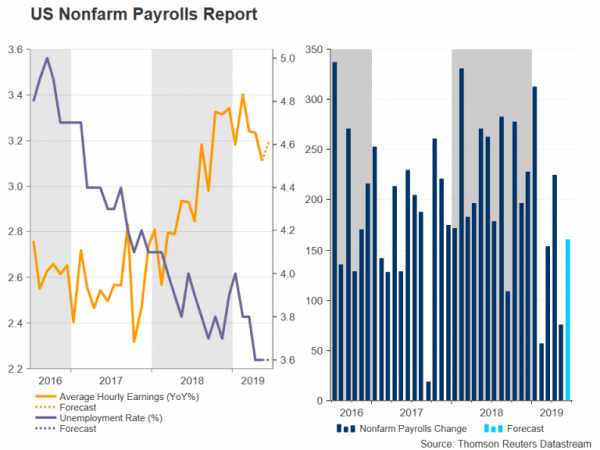 Average earnings growth eased to 3.1% year-on-year in May – the lowest since September 2018. It is expected to have picked up slightly to 3.2% in June. But with the Fed’s preferred price gauge – the core PCE price index – falling uncomfortably below the 2% goal, the modest wage increases are unlikely to be considered substantial enough by policymakers to boost inflation. As for the unemployment rate, it is projected to have stayed unchanged at 3.6% in June.

Dollar to struggle for direction from a neutral report

If the jobs data come in as expected, they’re unlikely to provide much direction to the dollar, which has been hovering between 107-109 yen since early June. The ADP employment report – a survey of private-sector employment that’s seen as a precursor to Friday’s official figures – missed expectations, pointing to gains of 102k jobs versus forecasts of 140k. This suggests there’s a greater risk that the headline NFP number will disappoint than it will beat the estimates.

The 107 handle is a key support to the downside for dollar/yen that could be broken should the June jobs report be another poor one. Breaching below this level would bring the pair in close range of the 78.6% Fibonacci retracement of the January-April upleg at 106.55. If the data is bad enough to strengthen expectations of a 50-basis points reduction at the July meeting, the 105 level would not be inconceivable for the bears.

However, an unexpectedly strong jobs report could help the greenback resume the rebound it started when the US and Chinese leaders agreed to restart trade talks at last weekend’s G20 summit. Dollar/yen could reclaim the 108 handle before targeting the 50% Fibonacci at 108.68, which acted as a strong resistance level during June.

With many US traders likely to be away from their desks on Friday due to the 4th of July holiday on Thursday, global traders should be wary of lower than usual liquidity on NFP day that could result in some excess volatility.

But the big takeaway from the June report will be whether it will sway the Fed to lower rates on July 31, and if so, by how much. Although the Fed has so far not attempted to correct the market thinking in anticipating some policy easing, neither has it clearly flagged a rate cut as early as this month. In fact, Fed Chairman Jerome Powell recently hinted that a rate cut isn’t a done deal, saying the Fed is “grappling” with the question whether the current uncertainties justify additional policy accommodation.