USD stopped its weakening against a number of other currencies, as the US inflation rates for June released yesterday, seem to stabilize. The headline CPI rate slowed down as expected, reaching +1.6% yoy, yet the core rate ticked up reaching +2.1% yoy, implying that some stabilization is in the works. The figures were even more convincing on a month on month level, at which the headline rate remained unchanged and the core rate ticked up. Analysts were quick to respond and mentioned that the stabilization could curb expectations for an aggressive rate cut by the Fed on the 31st of July meeting. Please bear in mind that one of the main worries mentioned in the Fed’s meeting minutes, released on Wednesday was the slowdown of inflation. Should comments by Chicago Fed Evans today and NY Fed President Williams on Monday, sound less dovish, we could see the USD picking up strength. We also expect the USD to remain mainly Fed driven in the next few days. EUR/USD dropped yesterday yet corrected above the 1.1260 (S1) support line during today’s Asian session. As the pair broke the upward trendline incepted since Wednesday, we could see the pair maintaining a sideways movement. Should the pair’s long positions be favored by the market, we could see it aiming if not breaking the 1.1300 (R1) resistance line. Should the pair come under the selling interest of the market, we could see it breaking the 1.1260 (S1) support line once again and aim for the 1.1220 (S2) support barrier.

CAD seems to continue to firm against the USD in the past three days, despite the BoC maintaining a dovish tone in its last rate decision. The pair is nearing a nine-month low, as it seems to have broken the 1.3060 (R1) support line (now turned to resistance). Despite BoC maintaining lower interest rates (+1.75%) than the Fed (+2.5%), the prospects of the two banks differ substantially. BoC in its latest meeting had on the one hand highlighted the risks surrounding the Canadian economy, yet refused to clearly adopt an easing bias. On the flip side, the Fed seems to be adopting an even more dovish bias and analysts were quick to note that the relative monetary policies of BoC versus the Fed, look like diverging. Specifically the market seems to be pricing in a less than 35% chance for the BoC to cut rates until the end of the year, while for the Fed the chances are for two cuts for the same period. The contrast in the prospects of the two banks, is highlighted by the fact that they are two closely working economies. We could see the central bank differentials continuing to favour the Looney, especially should also oil prices favour the CAD. USD/CAD clearly broke the 1.3060 (R1) support line yesterday, now turned to resistance. As a downward trendline seems to be forming for the pair, we tend to maintain a bearish outlook for the pair. Should the bears maintain control over the pair’s direction, we could see it aiming if not breaking the 1.2965 (S1) support line. Should the bulls take over, we could see it breaking the prementioned upward trendline, the 1.3060 (R1) support line and aim for the 1.3145 (S2) support hurdle.

Today, during the European session, we get Eurozone’s Industrial production growth rate for May. During the American session we get the US PPI rate for June, the Fed’s Monetary Policy Report is due out and later on, the Baker Hughes oilrig count figure will be released. Please bear in mind, that Chicago Fed President Evans is scheduled to speak during the American session and we could see some volatility for the USD, should any substantial comments about the Fed’s monetary policy be made. During Monday’s Asian session, we get China’s GDP growth rate for Q2 and China’s Industrial production growth rate for June, which could affect the Aussie. 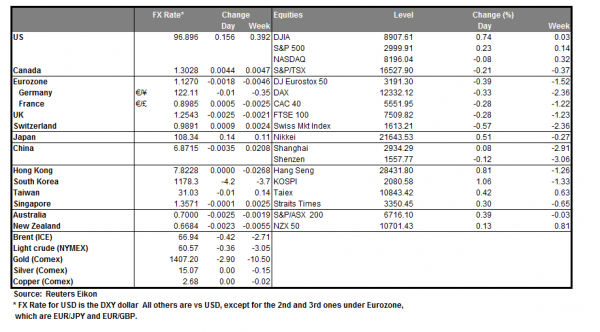