Another milestone was done by Facebook yesterday, it moved a step closer to launch its WatsApp payment services in India. The company has been working on this since 2018 for its million plus users but the government regulation has been a major hurdle. It was required by the company to involve third party auditors in order to show them that the customer data is stored only on the servers based in India. The country’s digital money market is expected to grow to $1 trillion by 2023 which is nearly 5 times more than the current volume.

The timing of this initiative was really important because Facebook’s crypto currency called Libra faced its biggest challenge to date at Senate Banking Committee hearing yesterday. The law makers weren’t that friendly towards its new fintech initiative given that the company’s reputation has been tarnished due to the privacy issues. This has become the biggest roadblock for the firm.

Libra is an ambitious project which has a great potential because it offers an alternative banking system at a much lower cost, but in order to change this dream into reality, Facebook must convince Washington. The lawmakers called the project “dangerous” and this is because Facebook has failed its users to gain their trust fully. David Marcus, the project leader, faced some tough questions for nearly 2 hours but he maintained his conciliatory tone by saying that Facebook is determined to apply best practices to fight fraud, earn the trust back.

The pain isn’t over yet for Libra as the firm’s officials will have to answer more questions in a House Financial Services Committee Hearing today. Facebook has made one thing clear for the lawmakers that this innovation is coming and it is up to the United States if it wants to spearhead this technology otherwise it is only a matter of time when companies like Alipay can take over this space.

The scrutiny of Facebook’s crypto currency has hit bitcoins price. All of this started with a tweet on Friday by the president of the United States, Donald Trump, who criticised Libra and crypto currencies. As I said before, Libra is a project wish is going to continue to provide both head and tail wind for the crypto king, Bitcoin. Mr. Marcus did provide assurance that the company is committed to “get this right” before it goes live.

Speaking purely from the price action perspective, the Bitcoin price declined as much as 8.9 percent during the hearing and for the week it is down nearly 16 percent. The price has found its support near the 50-day moving average which is trading at $9,311. If the price falls below the 50-day moving average, it is likely that the price may continue to move lower and find support around the area of $7,418. The 242-day moving, which has impressive track record, is something that I am looking at closely. It is trading at $6,983 and the price must stay above this line in order for the bulls to keep their hopes alive. 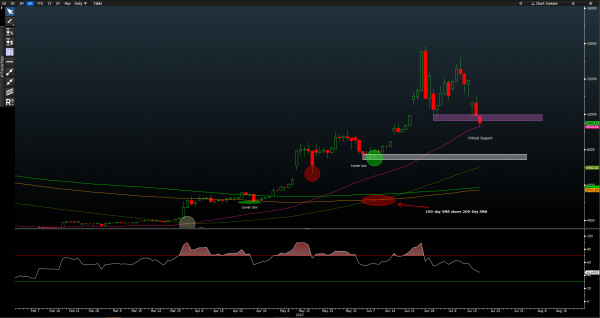