US equities will likely get little direction from a very quiet European morning. Markets remain fixated on the Jackson Hole speeches at the end of the week and demand for safer assets will likely remain strong until we have clarity on how the Fed will respond to growing risks to the outlook. Tomorrow’s release of the Fed’s Minutes from the July 30-31st policy meeting will likely give little clues as to what will be next move. The Fed fund futures markets are currently pricing in 65 basis point cuts by December.

With US stocks so close to record high territory and a global pool of negative yielding debt above $15 trillion, stocks should see limited downward pressure as the US economy remains the strongest amongst the other advanced economies. Second quarter earnings disappointed and while third quarter guidance came in light than analysts’ estimates, signs for an extended trade truce are keeping stocks supported.

With the dollar near one-year highs, investors demand for US equities and Treasuries will keep the greenback supported even if the Fed hints at going into an easing cycle. 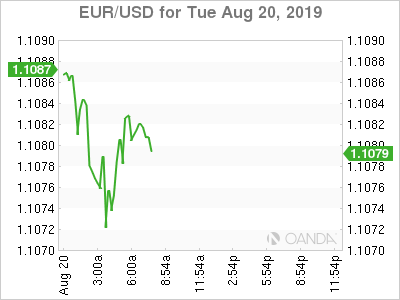 Global oil demand forecasts are likely to see upgrades as central banks and governments become more aggressive in delivering stimulus. With expectations for this week’s inventory data to post a small draw, we could see oil remain focused on geopolitical tensions in the Middle East and updates on Germany’s stimulus plan and further queues from the Fed. Oil could rise by a few percentage points if the Fed uses Jackson Hole to signal that last month’s rate cut might not just be a midcycle adjustment, and could be the beginning of more rate cuts and unconventional measures. 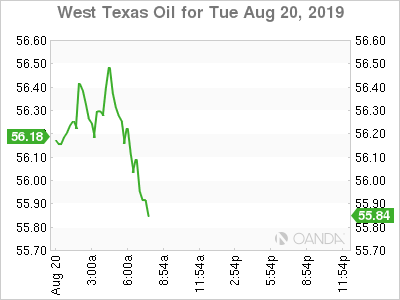 The bullish case for gold is an extremely overcrowded trade, but it seems that if easier monetary policy will be confirmed this week by the Fed at Jackson Hole, we could see the higher prices for all commodities. With too much negative yielding debt out there, investors will likely prefer to hold gold as their flight-to-safety trade. 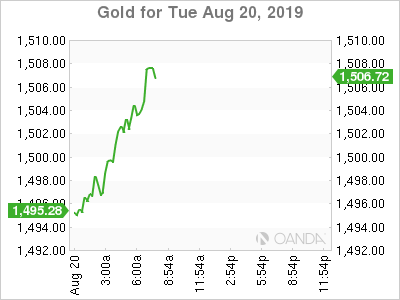 Home Depot is bouncing around in the pre-market despite cuts to their outlook as investors believe we will not see President Trump go forward on tariffs that will hurt the US consumer. Lumber price deflation is also weighing the outlook, as they cut both their revenue and same-store sales outlooks each by a full percentage point. Since the housing market is still stable and the US consumer is strong, the home-improvement giant could remain supported here if the trade war does not see any major escalations for the remainder in the year.