The USD weakened against a number of other currencies yesterday, as the US Index retreated from yesterday’s highs. Analysts tend to note that the USD weakened due to a slipping of the US yields and ahead of the release of the Fed’s minutes later today. The weakening was also reflected against the Euro as the pair rose despite the Italian Prime minister submitting his resignation yesterday, increasing political uncertainty in the Eurozone. According to media Italian PM Conte handed in his resignation, more or less blaming Salvini and declaring that the coalition ruling Italy is now dead. We could see further instability and expect the release of the Fed’s minutes late in the American session today to provide volatility for the pair. Please bear in mind that the minutes describe the Fed’s last meeting, where a rate cut was decided and should they show an overly dovish Fed, we could see the USD weakening ahead of the Jackson Hole symposium where more clues about the Fed’s intentions are expected. EUR/USD rose somewhat yesterday, testing the 1.1100 (R1), yet proved unable to clearly break it. We could see the pair maintaining a sideways motion, as it seems to show some signs of stabilization. Should the pair’s long positions be favoured by the market, we could see the pair breaking the 1.1100 (R1) resistance and aim for the 1.1140 (R2) resistance level. Should the pair come under the market’s selling interest, we could see it breaking the 1.1050 (S1) support line and aim for lower grounds.

The pound temporarily strengthened against the USD yesterday, at the prospect of the Brexit deal being renegotiated. Expectations were on the rise as German chancellor Merkel stated that the EU would think about practical solutions to the backstop. Analysts tend to note that there still seems to be no fundamental shift in the issue, hence any gains made by the pound may be temporary. It should be noted that the Boris Johnson’s demands for the EU to reopen the Brexit deal, was rejected by the EU yesterday, as reported by media. Other headlines mention that the UK steps up preparedness for firms as the Brexit deadline looms We expect the pound to remain under pressure as Brexit uncertainty remains high and should there not be any fundamental changes, we expect any gains to be temporary or not GBP driven. Cable rose yesterday breaking the 1.2135 (S1) resistance line, now turned to support. We could see the pair correcting lower should the pound come under pressure today and should the bears be fully in charge of the pair’s direction, we could see cable breaking the 1.2135 (S1) support line and aim for the 1.2075 (S2) support level. Should the bulls dictate the pair’s direction, we could see it breaking the 1.2210 (R1) resistance line and aim for the 1.2290 (R2) resistance level. 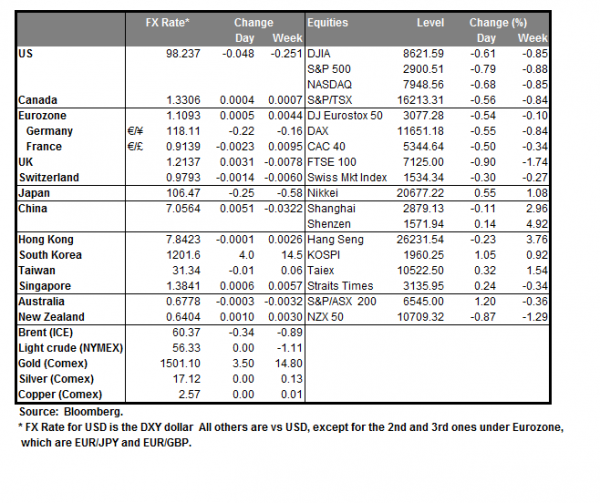