In the US, data showed the producer price index (PPI) rose 1.8% on a yearly basis in August, compared to an increase of 1.7% in the prior month. Market participants had envisaged the PPI to record a similar rise. Moreover, the nation’s MBA mortgage applications advanced 2.0% on a weekly basis in the week ended 06 September 2019, following a drop of 3.1% in the prior week.

In the Asian session, at GMT0300, the pair is trading at 1.1013, with the EUR trading slightly higher against the USD from yesterday’s close.

Looking ahead, traders would await the European Central Bank’s interest rate decision followed by Euro-zone’s industrial production for September and Germany’s consumer price index for August, set to release in a few hours. Later in the day, the US consumer price index and monthly budget statement, both for August along with initial jobless claims, will pique significant amount of investors’ attention. 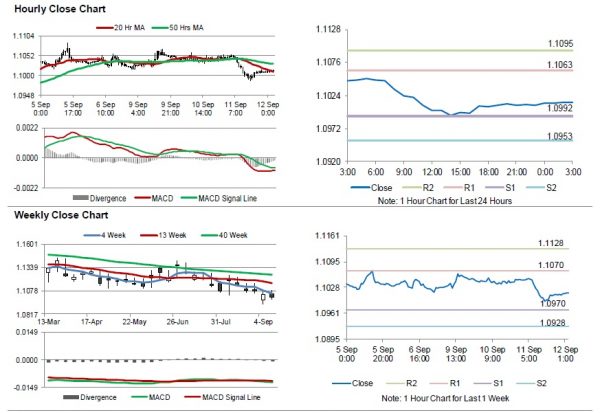