Cryptocurrencies had a volatile trading week. Risk appetite returned to the market with the news that US and China were defrosting their trade negotiations. The crypto world saw a correction to the downside at the beginning of the week as Bitcoin had attracted investor flows as a safe haven, so naturally it was being sold against other assets.

The European Central Bank (ECB) monetary policy decision announcement to cut the deposit rate deeper into negative territory and restart its quantitative easing (QE) program by buying 20 billion euros of bonds a month sent a strong signal that rates will remain low for longer. Crypto rose as the US dollar is softer as the U.S. Federal Reserve is heavily anticipated to follow suit next week with a 25 basis points interest rate cut. 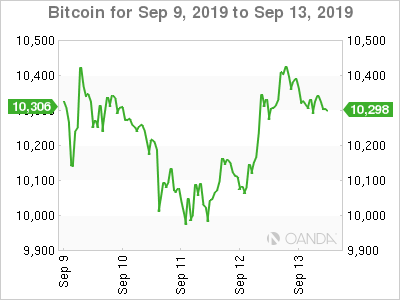 Bitcoin traded within the 10,000 to 10,300 range this week as the ECB rate decision was the catalyst for higher price levels. The Fed has been monitoring US economic indicators and so far the picture is mixed, but with pressure from the White House and the market already pricing in a rate cut, it would be a huge disappointment if the central bank doesn’t deliver.

Lower rates around the world is driving investors to seek higher yields and returns in alternative asset classes. Interest in cryptocurrencies remains high and interest from emerging markets to avoid capital controls or currency devaluations could push the price of Bitcoin above 10,500 if the Fed follows through, and higher if there is a more dovish monetary policy decision like some members of the rate setting committee have suggested.