Oil prices jumped on Monday as there were attacks on Saudi oil facilities on Saturday, cutting production of an equivalent of 5% globally. Media also report that return to full capacity of production, could take weeks and not just days, providing a substantial disruption of supply. For the time being Saudi oil exports are to continue normally this week as the kingdom, is expected to utilize its reserves. The US President said that he approved the release of oil from the US strategic petroleum reserve if needed and stated that the US is “locked and loaded” if Iran was behind the attacks. Media report that White House officials have stated that they had substantial evidence that Iran was behind the attacks. Rising oil prices could have longer macro effects and could weaken oil importing economies, such as China. The insecurity seems to have started to affect the market and albeit oil prices could correct lower, further tensions could boost them once again. Also, it should be noted, that USD/JPY opened with a negative gap indicative of the safe-haven inflows for the JPY. IT should be noted that the event had a similar effect also for CHF. WTI prices opened with a positive gap during today’s Asian session, breaking all of our resistance lines and testing the 61.45 (R3) resistance line, yet corrected lower later on aiming for the 58.30 (S1) support line. Should the commodity’s prices continue to correct lower, we could see it breaking the 58.30 (S1) support line and aim for the 57.50 (S2) support level. Should the uncertainty boost oil prices once again, we could see WTI prices, breaking the 59.75 (R1) resistance line and aim for the 60.60 (R2) resistance level.

Cable rallied on Friday as Brexit optimism supported the pound. Brexit optimism was fueled by a report in the Times that the largest North Ireland party may be willing to accept some EU rules after Brexit. Despite the report being swiftly denied by the party, Brexit optimism got a boost as there may be a ray of hope to solve the Irish backstop issue. It should be noted that analysts tend to note that GBP shorts are being slashed due to the high Brexit risks receding recently. However, GBP bears keep underscoring the possibility of developments turning sour, should UK’s PM insist on bypassing the UK law banning a hard Brexit or the EU being inflexible. On the flip side uncertainty is still present and volatility could dominate the pound once again, until there are more concrete evidence of progress. Cable rallied on Friday, breaking the 1.2400 (S1) resistance line (now turned to support) and aimed the 1.2510 (R1) resistance line before stabilizing lower. Should the bulls be in charge once again, we could see the pair breaking the 1.2510 (R1) resistance line and aim for the 1.2590 (R2) resistance level. Should the bears take over, we could see cable breaking the 1.2400 (S1) support line and aim for the 1.2310 (S2) support level. 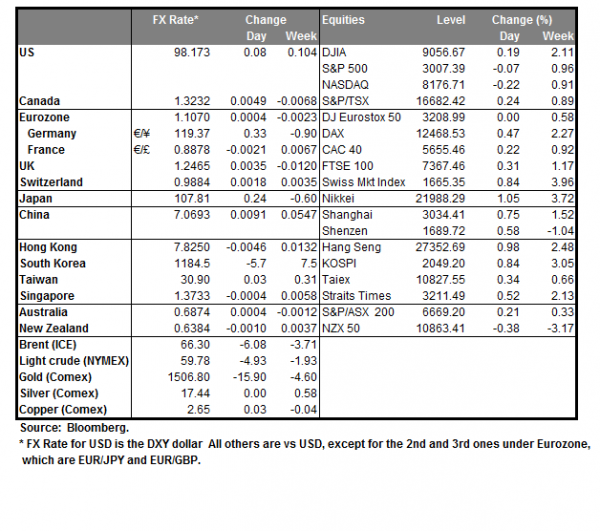