The Bank of Japan will conclude its two-day policy meeting on Thursday, a few hours after the Federal Reserve announces its latest rate review. After the European Central Bank decided to restart its asset purchase program in the past week and the Fed is widely expected to cut rates for the second time this year, pressure is mounting on the BoJ to follow suit. However, fresh policy easing could arrive in Japan sooner than many expect amid reports the Bank is close to approving additional stimulus measures as early as this week.

The BoJ’s last major overhaul of monetary policy was in September 2016 when it introduced its yield curve control. Since then, policymakers have made several tweaks to their existing program but with no luck in lifting inflation to the Bank’s price goal of 2%. In fact, inflation data due on Friday (Thursday, 23:30 GMT) is forecast to show the core consumer price index (CPI) excluding fresh foods fell to 0.5% in August, which would make it the slowest annual gain in two years. 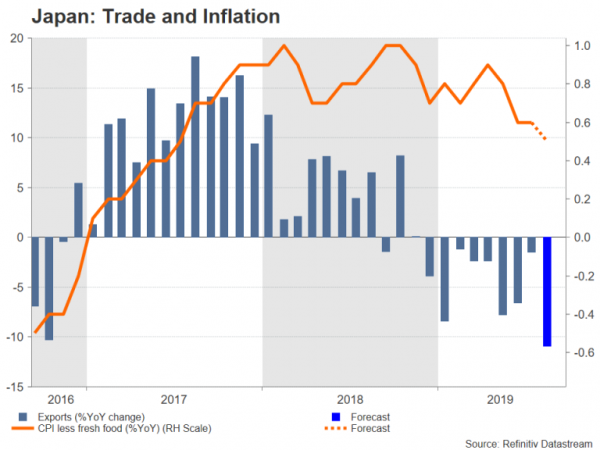 However, while the inflation data has consistently disappointed, GDP growth has stood up relatively well in the face of ongoing trade tensions and a slowing global economy. That has allowed the BoJ to take a wait-and-see approach as it assesses the impact of the trade war on the Japanese economy. Growth has been surprisingly resilient over the last three quarters as solid household and business spending have offset tumbling exports.

But that could be about to change if there’s no end to the damaging trade dispute anytime soon and exports continue to slump. Exports are expected to have posted their 10th straight month of annual decline in August, data out on Wednesday (Tuesday, 23:50 GMT) is anticipated to reveal. That would make it more likely that businesses will cut their expenditure in the coming months.

Household incomes have also come under strain in recent months as wage growth has turned negative, pointing to more cautious spending in the future. All this comes ahead of the scheduled increase in sales tax on October 1, which could further dent consumption.

Is a rate cut on the cards?

This may be one reason why the Bank of Japan might decide to take early action so as to mitigate the effects of the sales tax hike. The main policy change being reportedly mooted is a cut in the key interest rate from -0.1% to deeper into negative territory. However, much depends on whether policymakers will be able to find and agree on a way to minimize the impact of deeper negative rates on commercial banks. Another option for the BoJ is to widen the band that 10-year Japanese government bond yields can fluctuate around the 0% target, potentially letting yields fall further below zero. 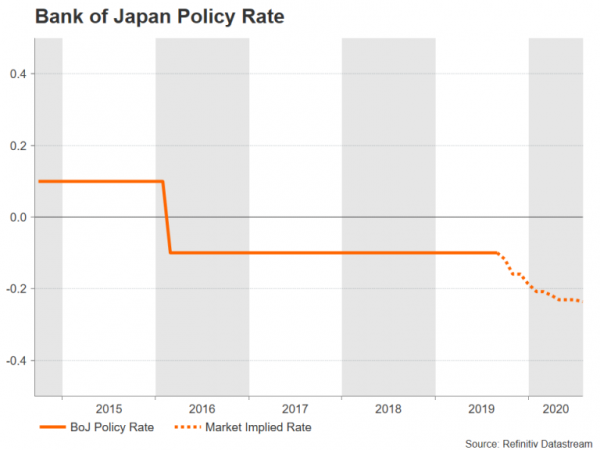 Investors aren’t convinced that the BoJ will announce anything substantial on Thursday, placing only low odds (about 17%) of a 10-basis point rate cut. The most likely outcome is a further dovish pivot in the Bank’s forward guidance, but this alone would not be enough to exert significant downside pressure on the yen. Assuming the Fed doesn’t strike an unexpectedly dovish tone at its meeting on Wednesday, dollar/yen could stretch its current rebound to the 50% Fibonacci retracement of the April-August downleg at 108.70.

Only a shock move will sway the yen

However, if the Bank of Japan decided the negative risks were considerable enough to warrant immediate policy action and cut rates to -0.2%, the response in FX markets is likely to be greater given the low market odds. A big sell-off in the Japanese currency could push dollar/yen towards the July top of 109.31, near the 200-day moving average (MA), before aiming for the 61.8% Fibonacci at 109.58.

But in the event that the BoJ announces no changes to its policy and appears no closer in committing to more stimulus, dollar/yen could retreat back towards its 50-day MA just above the 107 level.