Read The Fine Print, Bears Are In Control

Economic numbers out of the Eurozone weren’t thrilling at all today. The export number for the month of August for the so-called economic engine of the eurozone plunged. The German exports came in at -1.8%, the forecast was for -1.0%. This data shows how feeble the economic conditions are in the eurozone.

Trade talks resumed in the midst of heightened tensions between the two countries: the United States and China. The tit-for-tat behavior has been going on for some time and the hopes are that both countries would be able to hammer out an intern deal which perhaps draws a cease-fire line.

We have used our words carefully because the cease-fire doesn’t mean the reversal of current tariffs which are weighing on both economies. If we see anything meaningful and constructive on this, then it would be a landslide victory for the officials of both countries.

Despite the fact that we have seen some gains for the US markets yesterday but the bulls are still losing control. The reason behind this statement is that the equity bull and bear spread favors bear. As of yesterday, 20.31% of US investors had a bullish view, while 35.73% neutral and whopping 43.96% hold a bearish view. This means the bull/bear spread stands at -23.65%.

This is the key reason that we argue that equity investors are no longer that thrilled about the QE. This pill used to had a significant impact when it was introduced, and now, this doesn’t have the same kind of effect.

Smart money is confused than ever and the reason for this is that if we look at the weekly chart of S&P500, it confirms three consecutive weeks of losses and yet we are not only 4% off from record highs (something which we pointed out yesterday as well)

Investors Pulling Money Out of US equities

The general stance among investors is that they want to stay on the sideline ahead of current trade talk. The vanguard’s S&P500 ETF (with ticker VOO) shows an outflow of $2.9 billion at the beginning of this week and this has been the biggest withdrawal for the past 10 months, in other words, the second biggest on record since the inception of the fund. 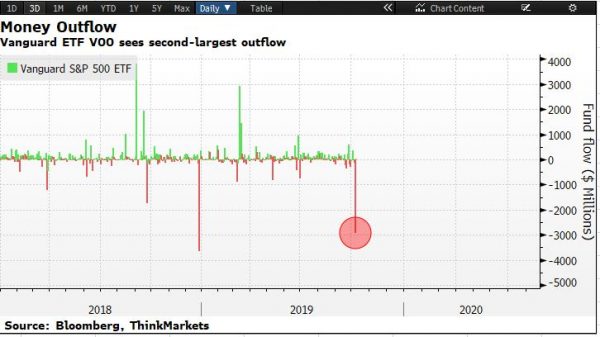