On the Up and Up, Even with No DUP?

With less than two weeks until the October 31 Brexit deadline, the U.K. Parliament is inching closer to passing legislation that would bring an end to “phase one” of the Brexit process, and unlock what is likely to be the more complicated and protracted “phase two” of the Brexit process: trade talks. Yes, the deal currently being considered by Parliament says little to nothing of substance about the future of E.U.-U.K. trade and how it would be conducted, leaving these issues to be negotiated in the years to come. However, before we go down that rabbit hole, let us return to the here and now. Indeed, PM Johnson’s Brexit deal is not yet over the finish line.

We wrote last week that the prospects for passing Johnson’s Brexit deal through Parliament were not great. In fact, the “meaningful vote” on the deal was more or less blocked, so we never had a chance to put the theory to the test. Accordingly, Johnson’s government has skipped step one: the meaningful vote, and moved on to step two: ratifying the “Withdrawal Agreement Bill,” or WAB for short. The WAB has much wider implications than the meaningful vote. It essentially involves a meaningful vote on Johnson’s deal plus a host of other related issues, including the finer points of the “transition period” (more on this later), while it also effectively writes Johnson’s Brexit deal into U.K. law.

The support or non-support from members of Parliament for the WAB is very much still up in the air at this point. The WAB is extremely complex, filled with legalese, and eight sitting days is not much time to consider such legislation. At the current juncture, we see the chances of the WAB passing as slightly above 50%, but emphasize that the numbers are fluid, and could change quickly as MPs have more time to consider the implications of the deal. If the WAB is defeated, the Brexit process likely will more or less go back to square one. Specifically, the October 31 Brexit deadline will likely be extended, and an election probably will take place later this year.

The more interesting case to consider, however, is one in which the WAB passes. The Democratic Unionist Party (DUP) is still seemingly holding out on supporting the deal, but a larger portion of Conservatives and Labour Party members are leaning toward supporting PM Johnson than previously envisaged. Again, it is far too early and close to call at this point, but the indications for the WAB to be ratified are looking slightly more positive.

Are We There Yet?

The basic rationale behind our tempered optimism on the ratification of the WAB lies in the fact that this really is just the beginning. Indeed, let us say for argument’s sake that the WAB is ratified prior to the current October 31 Brexit deadline. In this scenario, starting from November 1, something called the “transition period” would kick in. In essence, the U.K.’s current relationship with the E.U. would remain at a standstill from November 1 until the end of the transition period, currently slated for December 2020. Thus, the U.K. would be leaving the E.U. in theory, but not in practice, until the end of the transition period. During this period, the U.K. and E.U. would plan to hash out the terms of their future trading relationship, so that when the transition period ends, they can start trading on these new rules.

Sounds like a good plan. The main issue, however, is that 14 months is not enough time to negotiate a far-reaching trade deal. Moreover, in reality, the time available for trade talks is far less than 14 months. The WAB stipulates that the U.K. and E.U. must make a decision on extending the transition period by June 2020. PM Johnson will almost certainly call an election in the days and weeks that follow a potential ratification of the WAB to capitalize on building momentum for his Conservative Party, which currently has no majority in the House of Commons. Add in the fact that a new E.U. Commission must sit, there are various parliamentary recesses on both sides and other legislation must be dealt with, and the time available to negotiate with the E.U. on trade quickly whittles down to just a few months. Indeed, the talks may shift focus to extending the transition period almost immediately.

All of this means that attention will probably shift in relatively short order toward the question of extending the transition period beyond December 2020. What would happen if the U.K. and E.U. reach the end of the transition period without a new negotiated trade deal? Per the deal PM Johnson struck with the E.U., Northern Ireland would continue to enjoy frictionless trade with Ireland and the rest of the European Union, but the rest of the United Kingdom would effectively be leaving the E.U. with no deal. A customs border would be erected in the Irish Sea between Northern Ireland and the rest of the United Kingdom. Thus, while the parameters have changed, a modified version of a “no deal Brexit” is still possible even if the WAB is ratified. In the end, we suspect the transition period will be extended for as long as necessary, which could very well push the seemingly never-ending Brexit process well into the next decade.

If you are even more confused at this point than when you started reading this report, do not fret. The key takeaway up until now is that ratifying the WAB does not remove all Brexit uncertainty— rather, it modifies the parameters and timing of that uncertainty. Indeed, moving on to trade talks will merely open up Pandora’s Box on the spectrum of possible trading relationships the E.U. and U.K. could adopt after the transition period comes to an end. For its part, the WAB says very little of substance around the parameters or objectives of future U.K. trade talks with the European Union, and what little it does say is either not legally binding or can be amended/repealed at a later date. In that sense, if PM Johnson pushes for an election after a potential successful vote on the WAB, the results of that election will likely have a significant bearing on U.K. negotiating objectives in future trade talks. The better the performance for the Conservatives, the “harder” a Brexit (i.e., more barriers to trade) the U.K. will likely seek. Recall that current polling points to a comfortable lead for the Conservative Party (Figure 1). 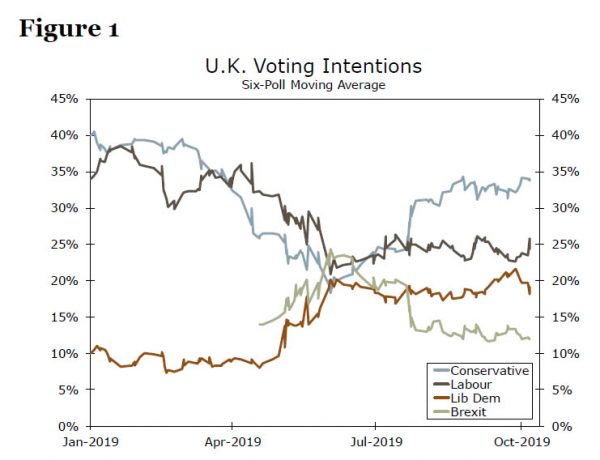