EUR/USD. What was expected did happen: on Wednesday, October 30, the US Federal Reserve lowered the interest rate on the dollar from 2.0% to 1.75%. Naturally, the US currency began to fall, the pair went up, but the movement was quite moderate: the market has long been ready for this decision of the Federal Reserve. As a result, the pair hardly reached the level of 1.1175, returning to the medium-term support/resistance line, which began last March.

The key data on the US economy, which was released on Friday 01 November, didn’t help the dollar a lot either. The number of new jobs outside the agricultural sector (NFP) in October was more than predicted (128K vs. 89K), but significantly less than the September value of 180K. The index of business activity in the manufacturing sector ISM was also less than expected (48.3 instead of 48.9). As a result, the bears’ attempt to push the pair down ended in a fiasco, and after reaching the level of 1.127, it turned around, went back up and ended the week at 1.1165;

GBP/USD. It was decided to add a few more episodes to the protracted series called Brexit. Britain never came out of the EU. The main character of the series, Prime Minister Boris Johnson, who promised to “die in the ditch” if Brexit does not take place on October 31, changed his mind to die. The EU has granted the UK another extension, and now the country is heading for early parliamentary elections on December 12.

The next episode of the series will be devoted to the adoption by Parliament of amendments to the law on elections. And depending on which way the ship of British lawmaking heads, it depends on whether Prime Minister Johnson can stay at the helm.

The Brexit postponed once again and the weakening of the dollar allowed the pound to strengthen its positions somewhat, by the middle of Thursday, October 31, the GBP/USD pair rose by 150 points, then moved into a horizontal movement in the 1.2925-1.2975 corridor and finished at 1.2937;

USD/JPY. As we predicted, the Bank of Japan left the interest rate unchanged at -0.1%. The growth of the yen last week was due to three main factors: the reduction of the US Federal Reserve interest rate, another slip in the preparation of the US-China trade agreement and, it is possible, the associated strong growth of long-term US Treasury bonds. According to Bloomberg, the Chinese side may not want to conclude any serious trade deals with the “unreliable President Trump.” Trump, for his part, is unlikely to want to aggravate relations with China, so as not to damage the US economy in the run-up to the presidential election. So we can expect a long lull on this front.

Against this background, the result of the week was the strengthening of the Japanese currency to the level of 107.88. However, this was followed by a small rebound, as a result of which the pair put the final chord of the week at 108.16;

Cryptocurrencies. Fundstrat co-founder and analyst Tom Lee is confident that the stock market directly affects Bitcoin quotes. “Last Friday (October 25), the S&P 500 index began to grow actively due to the increase in the share price of a number of large technology companies. Bitcoin strengthened significantly as well. Many mentioned XI Jinping’s speeches, but in fact everything could come together in the stock market, ” Li said. However, he somehow did not take into account that the growth of technology stocks could be caused by the statement of the head of China regarding the popularization of digital currencies and blockchain.
Be that as it may, according to a report provided by Google Trends, thanks to the Bitcoin rally, the number of Internet requests on the topic of cryptocurrencies increased by 30 percent last week. But if the growth of Bitcoin caused the growth of requests, then the growth of requests did not affect Bitcoin in any way. As we expected, after such a shake-up, the market went into a calming stage, volatility gradually came to naught, and quotes, consolidating in the $9,250 zone, drew a figure known in technical analysis as the “pennant”.

Following the main cryptocurrency (BTC/USD), such top altcoins as Ethereum (ETH/USD), Ripple (XRP/USD) and Litecoin (LTC/USD) did the same. The total market capitalization of the crypto market was not an exception, which is logical, its volume gradually decreased during the week from $257 billion to $239 billion.

As for the forecast for the coming week, summarizing the opinions of a number of experts, as well as forecasts made on the basis of a variety of methods of technical and graphical analysis, we can say the following:

EUR/USD. On November 1, the ECB began buying market assets worth 20 billion euros per month. On the same day, former IMF chief Christine Lagarde replaced Mario Draghi as head of the Bank. Under her, according to some experts, the monetary policy of the European regulator will become softer. That, as a consequence, will cause a decline in the Euro against the dollar.

But there is a reverse scenario. It suggests that under pressure from Trump, the US Federal Reserve will reduce the interest rate to zero. This will solve the problem with dollar liquidity and, providing the American market with cheap money, help Trump in re-election for a second term. The US government debt, according to the US Treasury Department, has already reached a record high of $23 trillion. And further printing of unsecured money could significantly weaken the dollar. Trump’s pre-election intention to reduce the payroll tax can also contribute to the fall of the US currency.

This situation forces global players to be more cautious, as a result of which the monthly volatility in the EUR/USD pair fell to 4.5%. This happened only twice – in 2007. and in 2014.

If we talk about the very near future, the fall of the dollar and the growth of the Euro in the coming week is expected by 60% of analysts, supported by 90% of oscillators and trend indicators on H4 and D1. The nearest goal is the rise and consolidation of the pair in the 1.1200-1.1250 echelon. The next targets are 1.1350 and 1.1410.

40% of experts supported by graphical analysis and 10% of oscillators giving signals about the European currency being overbought voted for the decline of the Euro. In this scenario, the pair is most likely to move in the side channel 1.1075-1.1175. And in case of breakdown of its lower border, there will be a decrease to support in the 1.1000 zone.

The formation of local trends may be influenced by the change in the ISM business activity index in the service sector, the value of which will be known on Tuesday 05 November. According to forecasts, it can grow from 52.6 to 53.2, which in the short term will strengthen the dollar; 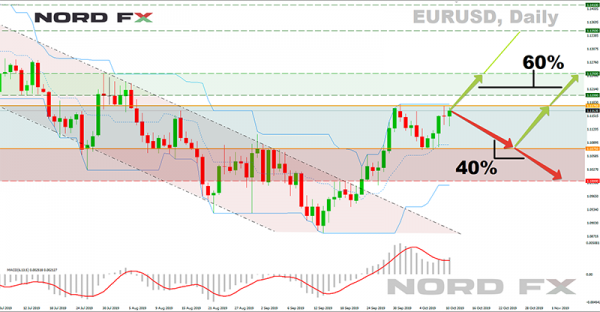 GBP/USD. Thursday 07 November will be dedicated to the UK. On this day, the Bank of England will announce its decision on the interest rate, as well as the planned volume of asset purchases. These figures are likely to remain unchanged. Therefore, of greater interest is the speech of the head of the Bank Mark Carney, in which investors will look for an answer to the question of how the regulator will behave in the event of a particular outcome of the early parliamentary elections. Even here, though, Carney may confine himself to phrases as foggy as London weather.

At the moment, the vast majority of indicators are colored green. 65% of experts also expect that, following in the wake of the Euro, the pound will improve its position against the dollar. The nearest resistance is 1.3015, the target is 1.3125.
The remaining 35%, together with graphical analysis on H4 and D1, believe that the GBP/USD pair will stay in the side corridor 1.2790-1.3015. If its lower border breaks, the next support is in the 1.2700 zone;

USD/JPY. It is unlikely to expect surprises from the meeting of the monetary policy Committee of the Bank of Japan on Monday 06 November as well. Moreover, last week the regulator not only confirmed the immutability of its course, but also removed the deadlines for it. Now it’s “not until 2020,” but ” as long as will be needed.” Rather, the yen will be affected on Tuesday by the ISM business activity index in the US services sector.

Cryptocurrencies. Professor of Economics at Stanford University Darrell Duffy believes that within 10 years, Bitcoin and other cryptocurrencies will be able to completely replace the usual banking system. And regulatory pressure on Libra and other promising projects is a big mistake. “Regulators will regret that they could not find a common language with Zuckerberg and other developers. A shadow cryptocurrency with such a vast community (Facebook) can easily bring down the financial system in a matter of months, ” Duffy threatened.