Financial markets bounced from recent local lows. The American S&P500 returned to the region above 3100. Hong Kong’s and Shanghai’s markets started the day with a positive following their US colleagues. However, by the end of the Asian trading session, they had almost offset all the gain. The news of the trade negotiations gives little reason for markets to be optimistic about the prospects. Participants are increasingly waiting for real things to happen, rather than vague comments about endless talks.

There is no doubt that markets would feel worse if a continually operating monetary easing pump did not fill the liquidity pool. A good example was the ‘repo-gate’ in September when short-term lending rates jumped fourfold, and the Fed made temporary liquidity injection measures permanent.

The ECB is also filling this pool, not to mention the Bank of Japan’s many years of work in this area. Without these measures, it is clear that markets lack liquidity, despite the relatively healthy growth rate of the US economy.

However, over time, we are getting more and more signs that the trend is still downward. Weekly unemployment claims data show an upward trend since September, despite the Fed’s easing. Employers are even more concerned about the consequences of trade conflicts than they are about the effect of lower rates.

The US Leading Index declined for the third month in a row in October, indicating a weakness in the economy over the past six months. The main reason for the deterioration is the weakness of production orders, which looks very worrying news.

On the positive side, the easing of the monetary policy breathed life into the US housing market, where both the number of building permits and sales in the primary and secondary markets are growing. 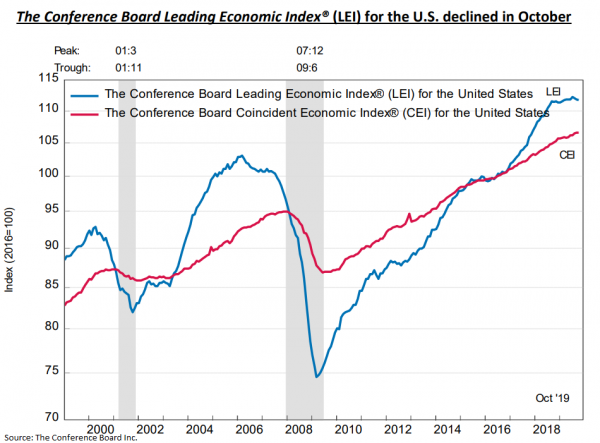 The Fed is still very good at copying the tactics it used in the early 2000s. At that time, Greenspan was struggling with declining in production and investment activity, and the side effect was an unprecedented boom in housing lending, which eventually led to economic collapse. The problem delayed, but then it worsened. The same seems to be happening now: bottom-rock interest rates support economic growth at the moment but accumulate issues for the future.