We had previously called for a 10 bps rate cut from the European Central Bank (ECB) at its December meeting next week, but due to a series of developments since we made that call, we are pushing back our ECB rate cut call to March 2020. In particular, some improvement in the economic data, a lack of clear rate cut signals from ECB officials and a case for letting the September package of easing measures “do its job” all suggest the ECB will hold policy steady next week.

Further ECB Easing Not Off the Table, Just Delayed

Prior to today, we had expected the European Central Bank (ECB) to cut its deposit rate 10 bps at its policy announcement next week. That view reflected persistent weakness in the Eurozone economy and low inflation and inflation expectations. Comments from ECB Chief Economist Philip Lane that the central bank was not yet at the lower bound reinforced our thoughts that more rate cuts were on the way, but recent developments have suggested any further cuts are unlikely to be delivered in December.

First, some improvement in Eurozone data suggests the central bank will hold rates steady in December. The manufacturing PMI has been edging higher and GDP growth was a bit stronger than expected in Q3 (0.2% quarter-over-quarter vs. 0.1% expected), while core CPI inflation has started to turn upward in recent months, albeit gradually. We would emphasize that these positive surprises have been modest, and primarily a sign of stabilization in the Eurozone economy rather than an imminent acceleration. In that context, we are not ready to pull our call for an ECB rate cut entirely, but rather are of the view that the cut will be delayed.

Another reason we think the ECB will not cut rates in December is that policymakers have not sent clear enough signals that a rate cut is imminent. ECB President Lagarde has had numerous opportunities to signal a December cut, including her testimony to European Parliament today, while Chief Economist Philip Lane has also had several chances, but neither has sent a clear enough signal for markets to price in any chance of a cut in December (the market-implied probability of a 10 bps ECB rate cut at next week’s meeting is essentially zero). Finally, we are also sympathetic to the argument that there is value in holding policy steady for an extended period after the ECB announced such a substantial package of easing measures in September. That package included a 10 bps rate cut, renewed asset purchases, more favorable terms on long-term funding for commercial banks and a tiering system for bank reserves. We understand that the central bank may want to lend more time to allow this package of easing measures work its way through the economy. Accordingly, we are shifting our call for a 10 bps ECB rate cut to March 2020 from December. That said, we will reassess our views after next week’s policy announcement. 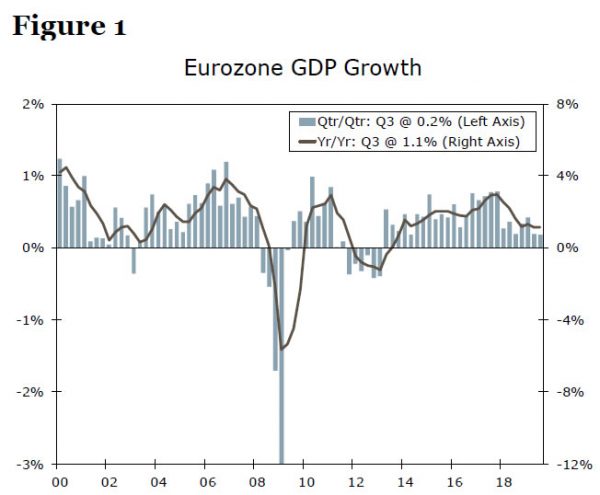 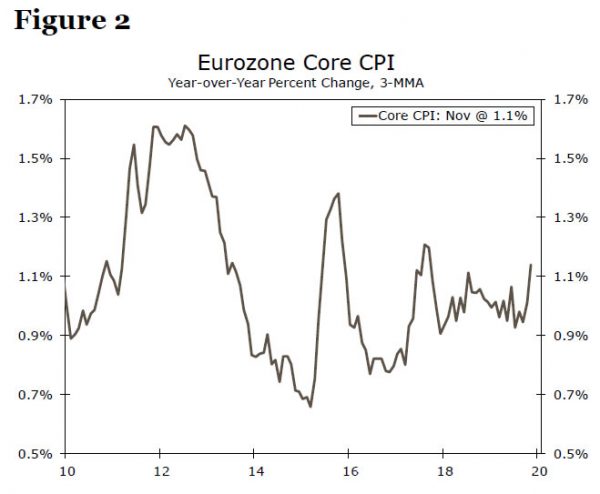