Lagarde’s EP hearing on Monday did not include any views or guidance on what the review may entail. We welcome the exercise as the previous review took effect in 2003. We have heard from many GC members that they welcome the review, but very few have been specific on what it may entail. Only Holzmann (Austria) has voiced concretely what a review may entail. In his view, it should lead to a lowering of the inflation target to 1.5%.

Generally, we argue that there are two ways to do it: a short and brief review or a large overhaul. ECB chief economist Lane said to Bloomberg that ‘the best type of review has a clear focus, knows its ambitions, and it’s not so extensive that it becomes impossible to conclude.’ We do see good arguments for a short and brief review, which could lead to a simple clarification of symmetry (e.g. deletion of ‘below’) or going back to the pre-2003 mandate (e.g. deletion of ‘close to’), but we favour a large overhaul. This is due to the scope, as it may also include which variables to target. For example, the increased volatility in the energy component in the inflation basket has resulted in the ECB’s reaction being dependent on core inflation, so targeting the core inflation (at a lower level than 2%) could be warranted. 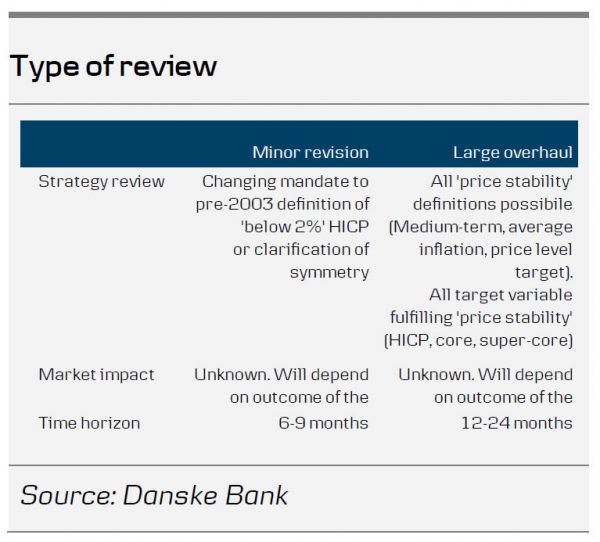 Undoubtedly, policy makers have picked up comments on the sustainability debate in recent weeks and months, of which Lagarde is a proponent. While we generally side with the Bundesbank president on the green QE debate (green / sustainability is a structural change and QE should be used to address a cyclical problem), we welcome the debate if it reflects a change in the underlying economy. Naturally, the central bank should be wary of structural changes to the economy, but as such the EU has a large number of institutions whose mandate is closer to climate effort than the ECB (such as EIB and most recently the EC that wants to create a fund that can facilitate up to EUR100bn of green investments). In our view, the ECB has only one mandate. That said, with Lagarde as president, we cannot rule out a more prominent role for green in the ECB going forward.

Market impact and risks to review

The repercussions of a strategic review are set to affect markets. All things equal, a review might lead to higher volatility given the uncertainty related to it. Depending on the scope of the exercise, which we hope will be published next week, the review may last between 6-24 months.

Since September, the clouds on the euro area macro outlook have started to lift. A nodeal Brexit has been avoided, further trade war escalations have not materialised and market-based inflation expectations have retraced somewhat from all-time lows. Q3 GDP growth has surprised on the upside (0.2% q/q versus 0.1% q/q projected by the ECB), which will be reflected in an upward revision of the ECB’s 2019 growth forecast to 1.2%. Similarly, a slightly higher oil price and a weaker effective EUR are likely to boost the HICP forecast for 2020 to 1.1%. With the ECB firmly on pause for now, we expect the new forecasts to underpin the narrative that no further easing is warranted at the current stage and that the inflation outlook is still on track towards the medium-term aim. 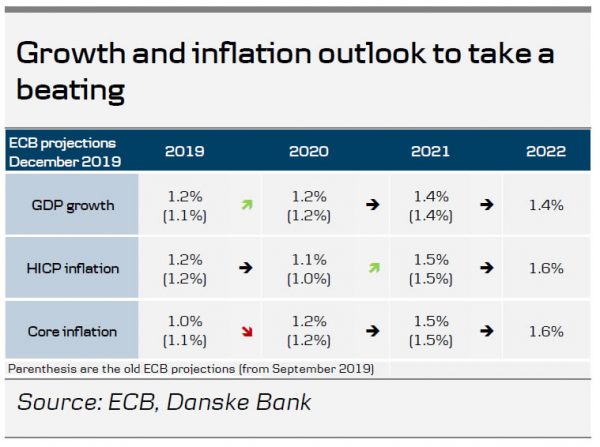 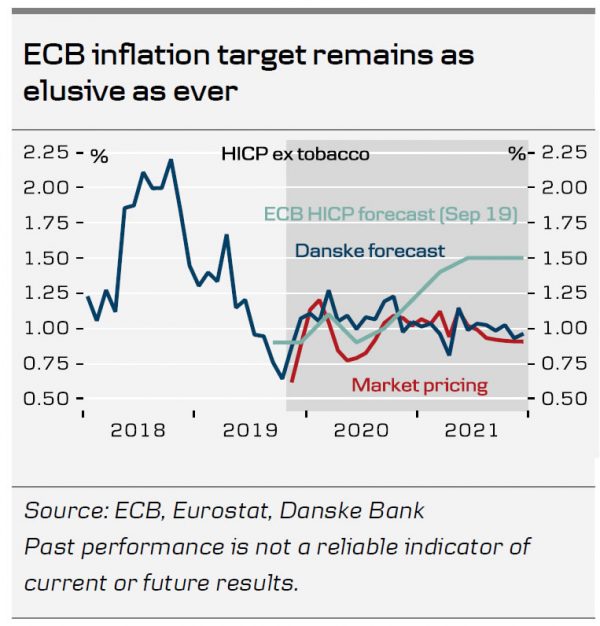 In light of the expected monetary strategy review, the new 2022 forecasts will also draw some attention at the December meeting. From tradition, we expect ECB to forecast HICP inflation ‘below, but close to, 2%’ and growth returning to potential. As discussed in Euro Area Research – Measuring the euro area inflation pulse, 29 November, we remain more downbeat about a material pick-up in core inflation foreseeing it only at 1.1% in 2020 and 2021. Especially, the subdued outlook for goods price inflation is rendering the ECB inflation target as elusive as ever in our view.

With its QE firmly setting the scene for the beginning of next year, we expect the ECB to be quite active with its monthly EUR20bn net purchases and on average EUR16bn reinvestments. As such, and as we outlined in our top trades for 2020, we expect periphery to perform against core bonds. We expect Bunds to trade in a 0% to -50bp range next year. We also favour Bund ASW spreads. See more in EUR and Scandi Fixed Income Top Trades 2020, 5 December. 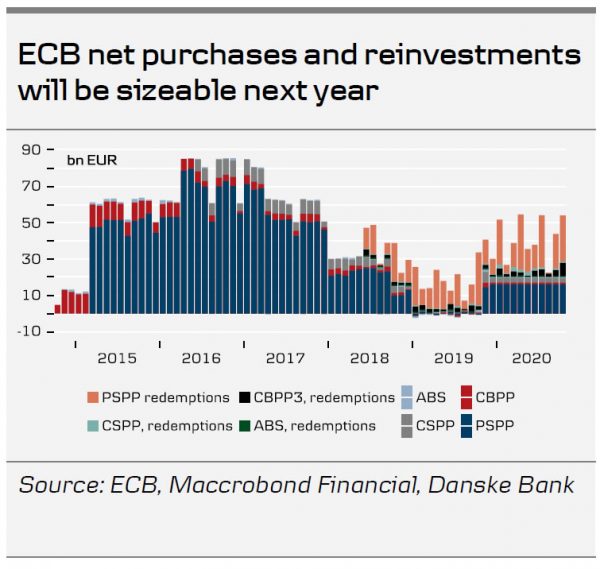