The USD strengthened against a number of its counterparts on Friday as the US employment report for November was substantially better than expected. All indicators outperformed expectations as the unemployment rate ticked down reaching 3.5%, the average earnings growth rate accelerated reaching +31% yoy and most importantly the NFP figure rose and reached 266k. The data provided a necessary boost to USD traders and some confidence in the Fed ahead of the Fed’s meeting on Friday. Analysts tend to note that the figures imply also that the US-Sino trade war which affected the manufacturing sector may have not spilled over into other sectors of the economy. We could see the USD sentiment being positive, while the market shifts its focus towards the Fed’s upcoming interest rate decision on Wednesday. EUR/USD tumbled on Friday, pushed down from Germany’s weak industrial data and the strong US employment report. The pair in a sharp drop, left the heights of the 1.1105 (R1) and tested the 1.1050 (S1) support line, stabilising during the Asian session. Should the positive feeling about the USD continue to guide the pair, we could see it breaking the 1.1050 (S1) support line and aim for the 1.1000 (S2) support level. Should on the other hand the pair find fresh buying orders along its path, we could see it aiming if not breaking the 1.1105 (R1) resistance line.

…while the pound prepares for the UK elections…

Market confidence in the pound seems to remain as the pound remains at elevated grounds against the USD in comparison to the past weeks. Main reason cited, is the potential win of the Conservatives in the UK elections which are to be held Thursday this week. It should be noted that polls continue to show a wide lead for the Conservatives providing support for the pound. Should the elections provide a comfortable majority for the Conservatives, we could see the Brexit process speeding up. On the flip side should the Tories fail to secure an outright majority we could see the pound plunging, as the situation could drag on. Cable had a small bounce during the American session, yet regained most losses made aiming once again for the 1.3170 (R1) resistance line. The pair’s sideways motion could be continued, yet we suspect that the bulls maybe hiding just around the corner for the pair. Main reasons for the bulls may include the pair’s confidence after the shock of the US Employment report release. It should be noted that he pair’s RSI indicator in the 4-hour chart, remains above the reading of 70 strengthening arguments for the dominance of the bulls, yet at the same time may imply that he pair’s long position may be heavily overcrowded. Should the bulls dictate the pair’s direction, we could see it breaking the 1.3170 (R1) resistance line and aim for the 1.3340 (R2) resistance level. Should the bears take over, we could see the pair aiming the 1.3015 (S1) support line.

Today, during the European session we get Germany’s Trade data for October and in the American session Canada’s house starts figure November. In tomorrow’s Asian session we could see increased volatility for the Aussie as China’s inflation rates for November and Australia’s Home Price Index for Q3 are released. Also bear in mind that RBA’s Governor Lowe is scheduled to speak.

As for the week ahead 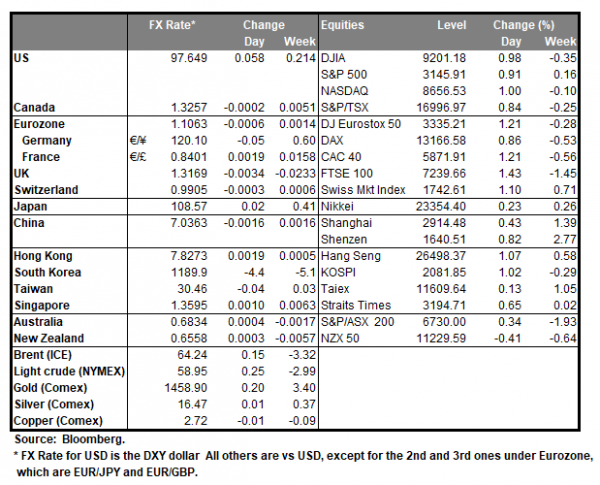