The Fed will announce its policy decision on Wednesday at 19:00 GMT. Having slashed rates at its last three meetings, no action is expected this time, so the dollar will take its cue from the signals about future cuts and specifically, from the updated ‘dot plot’. With markets still pricing in a full rate cut by November 2020, a dot plot that shows an unchanged Federal funds rate next year could come as a ‘hawkish’ surprise and by extension, lift the dollar a little.

With a little help from the Fed

Signs that the American economy was starting to take damage from the trade war, alongside concerns that a deteriorating global economy could ‘infect’ the US, caused the Fed to cut rates three times in a row at its previous meetings. The manufacturing sector was hit the hardest given its reliance on exports and foreign markets, though investment felt the heat too, as businesses moderated spending and postponed new projects.

Yet, the broader economy is still solid. Consumption – the backbone of US growth – remains healthy, supported by rising real wages and a robust labor market. Consumer confidence is equally strong, keeping concerns about a major slowdown at bay. Meanwhile, the truce in the trade war has held, and investors are hopeful the situation may deescalate further if a ‘phase one’ deal is finally reached. 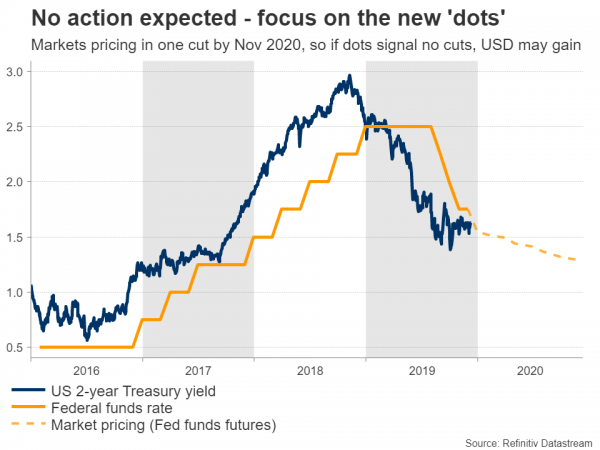 The Fed looks satisfied with its work for now. Monetary policy works with a lag, meaning that the recent rate cuts will only boost the real economy in a few months’ time, so policymakers can afford to take the sidelines for a while. This has also been the message from various Fed speakers lately – namely, that it would probably take a shock or a serious downturn in the data for rates to be cut again.

Wind back in the dollar’s sails?

With markets assigning virtually no chance for any action at this meeting, all the excitement will come from the new ‘dot plot’ of interest rate projections for the coming years, the updated forecasts for the US economy, and Chairman Powell’s remarks. The ‘dots’ will be especially important, as they paint a clear picture of where the entire Committee stands on rates.

In this respect, the most likely outcome may be a dot plot that signals no rate cuts for next year. If Fed officials saw a need for further near term stimulus, their tone would have been much different lately, and it would also raise the question of why they are not acting immediately. At the end of the day, whether rates are cut again next year will depend mainly on how the trade war evolves. Another escalation would almost certainly see the Fed cut, regardless of what previous ‘dot plots’ suggested. At this stage however, there’s just no obvious need to signal another cut.

Markets are still pricing in one full rate cut by November 2020 according to the Fed funds futures, so if the dots truly indicate no cuts for next year, that could lift the dollar as some easing expectations are priced out.

Finally, note that the nation’s retail sales numbers for November will also be released on Friday.

Nowhere else to hide

In the broader picture, the outlook for the dollar still seems positive as there are few alternatives. For instance, the euro area is mired in structural and institutional issues, and unless national governments finally decide to inject fiscal stimulus into their struggling economies to kickstart growth, there’s little prospect for a real turnaround in the euro.

Maybe if the Fed starts cutting rates much more aggressively and erodes America’s interest rate advantage, then the dollar will finally move lower. However, that seems highly unlikely too, unless the trade war reignites.

Looking at euro/dollar technically, initial support to declines may come from the 1.0990 area, a violation of which would turn the attention to 1.0940.

On the flipside, immediate resistance could be found near 1.1110, with an upside break bringing the 1.1170 zone into play.