Flash PMI indicators for December will be watched out of the Eurozone on Monday (09:00 GMT) as they could provide more tepid signs of recovery in the euro area. As the year draws to a close, there’s hope the worst is over for the struggling Eurozone economy, though it may be too early to judge whether worse pain is still to come. In the meantime, it may be difficult for the euro to post a convincing uptrend and could be confined to a sideways range for a while longer.

Are things looking up for the Eurozone?

It hasn’t been a great year for the Eurozone as a much-anticipated turnaround in growth never materialized, and instead, the European Central Bank was forced to abandon its policy normalization plans and restart its asset purchase program (APP). The never-ending Brexit and trade war uncertainty have proved to be a bigger drag on the region’s businesses than policymakers had foreseen, especially on the bloc’s largest economy – Germany.

However, while recent data remains mixed, there are some encouraging signs that things may be turning up. German exports rose for the second straight month in October, outstripping the forecasts, and the closely monitored ZEW economic sentiment index unexpectedly jumped in December, signalling a possible recovery.

Other surveys such as the Eurozone economic sentiment indicator and Germany’s Ifo business climate also showed improvement. That trend could continue on Monday with the flash readings of IHS Markit’s Purchasing Managers’ Indices (PMI) for December.

The Eurozone’s manufacturing PMI stood at 46.9 in November – worryingly far below the 50 level that separates expansion from contraction but up for the second month in a row. Industrial production data from Germany has yet to support the surveys’ picture of a pickup in growth but a third month of improving PMI would reassure investors that the downturn has reached a bottom. Forecasts are for the manufacturing PMI to inch up to 47.1 in December. 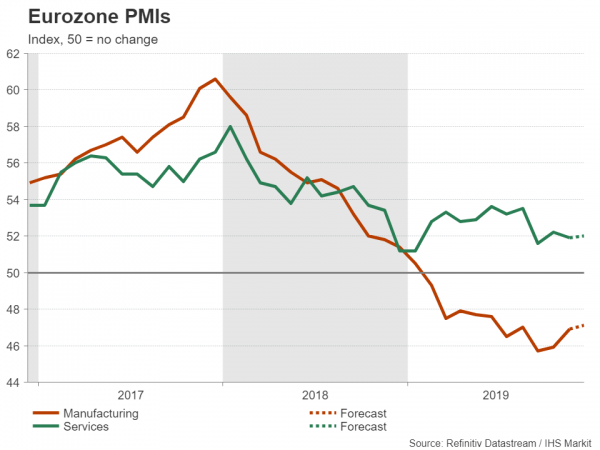 The services PMI has been somewhat more underwhelming lately, suggesting exporters’ gloom may have started to spread to the broader economy. The index dipped to 51.9 in November and is projected to rise marginally to 52.0 in December. An uptick would ease concerns of a persistent slowdown and possibly lift the euro.

Can the euro’s rebound be sustained?

The single currency has fallen by about 2.6% against the US dollar so far in 2019 and while it regained some positive footing from the greenback’s recent weakness, it has been struggling to make sustainable gains.

A positive set of PMI numbers on Monday could do the job in reinforcing euro/dollar’s latest upswing, pushing it decisively past the 200-day moving average (MA) and the 50% Fibonacci retracement of the June-September downtrend in the $1.1150 region. Clearing this resistance region would make it easier to overcome the 61.8% Fibonacci at $1.1208, after which the 78.6% Fibonacci at $1.1298 would come into focus.

In the longer term, however, a sustained recovery in the euro will depend on whether the US and China manage to finalize a preliminary trade deal, which has the capacity to lift optimism across the Eurozone, and on there being a smooth Brexit without any additional delays. Until then, the euro will struggle to gain significant traction, relying on a slightly more upbeat ECB to put a floor on any extended selloff.