JPY weakened against the USD yesterday and during today’s Asians session, ahead of the signing of the partial US-Sino trade deal. Market confidence got an additional boost as the US Treasury, removed the characterization of China as a currency manipulator. It was characteristic that the US move came just ahead of the signing of the phase 1 deal between the US and China. Analysts mentioned that albeit the characterization had no substantial consequences for China, the removal signals another symbol of goodwill. It should also be noted that China’s trade data for December proved to be solid, with the trade surplus slightly underperforming yet the imports growth rate outperforming expectations. Such positive data according to analysts provide further comfort and optimism about global growth and noted that a cyclical recovery of the Chinese economy could be expected in the first half of 2020. Should the positive headlines continue to reel in, we could see the Japanese currency weakening further against the USD, albeit it should be mentioned that it has reached already very low levels. USD/JPY continued its rise on Monday and during today’s Asian session as it broke the 109.70 (S1) resistance line, now turned to support, reaching an almost 8 month high. We maintain a bullish outlook for the pair as it continues to be guided by the upward trendline incepted since the 10th of January. Please bear in mind that the pair has reached already quite high levels for the period and the RSI indicator in the 4 hour has broken the reading of 70 underscoring the bull’s dominance, yet at the same time may be implying a possibly overcrowded long position for the pair. Should the bulls maintain control over the pair, we could see it breaking the 110.35 (R1) resistance line aiming for higher grounds. Should the bears take over, we could see the pair breaking the 109.70 (S1) support line and aim for the 109.00 (S2) support barrier.

…while the financial data weaken the pound…

The pound weakened further against the USD yesterday as UK economic growth data for November were seen as weak and had an adverse effect on the UK currency. Characteristically the GDP growth rate slowed down on a year on year basis reaching only 0.6% yoy, if compared to prior reading of +1.0% yoy and for the month of November had a marked contraction of -0.3% mom. The bearish effect was further boosted for the sterling as the manufacturing output also dived into the negatives. Please bear in mind that the period covered concerned the pre-election period, where substantial political uncertainty was present in the UK. Also, it should be noted that the BoE had predicted the weak growth data in November before a recovering in 2020. Should there be further weak financial data ahead for the UK in the next few days, we could see the pound slipping further as the possibility of a rate cut in the near future by the BoE could increase. Cable slipped yesterday breaking the 1.3015 (R1) support line, now turned to resistance and continued to hover below it, reaching a new two week low. We maintain a bearish outlook for the pair and for it to change we would require the pair’s price action to break the downward trendline incepted since the 7th of January. Should the pair continue to move southwards, we could see it aiming if not breaking the 1.2820 (S1) support line in search of lower grounds. Should the pair’s long positions be favoured by the market, on the other hand, we could see it breaking the prementioned downward trendline, the 1.3015 (R1) resistance line and aim for the 1.3170 (R2) resistance hurdle.

Today we get from the US the CPI rates for December and just before the Asian session we get the API weekly crude oil inventories figure. As for speakers ECB’s Mersch, NY Fed President Williams and Kansas Fed President Esther George. 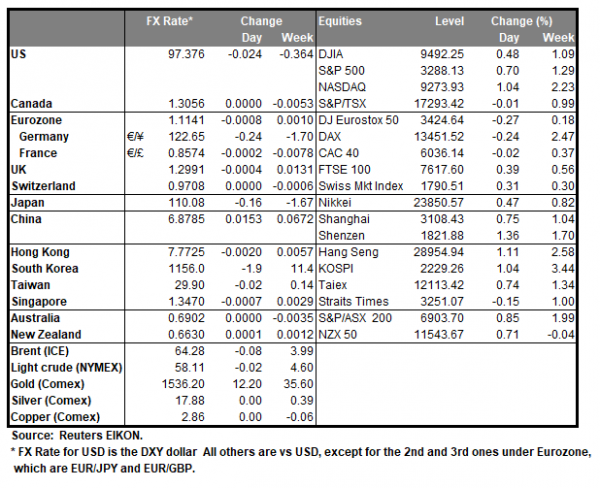