In the US, data showed that the consumer price index (CPI) advanced 2.3% on a yearly basis in December, marking its highest level in 8 years and meeting market expectations. In the previous month, the CPI had recorded a rise of 2.1%. Additionally, government budget deficit narrowed to $13.3 billion in December, compared to a deficit of $13.5 billion in same month previous year. Meanwhile, the US NFIB small business optimism index dropped to a level of 102.7 in December, declining from a 4-month high level and more than market anticipations for a fall to a level of 103.1. In the prior month, the index had registered a reading of 104.7.

In the Asian session, at GMT0400, the pair is trading at 1.1130, with the EUR trading a tad higher against the USD from yesterday’s close.

Moving ahead, traders would await Euro-zone’s trade balance data and industrial production, both for November, slated to release in a few hours. Later in the day, the US producer price index for December and the NY Empire State manufacturing index for January along with the Fed’s Beige Book, will pique significant amount of investors’ attention. 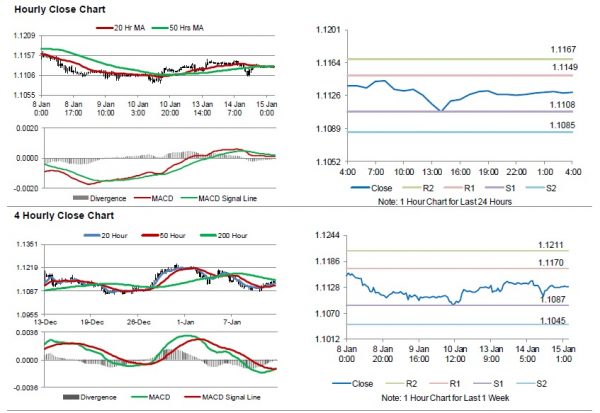 Asia Morning: Momentum Picks Up On Data And Deals