The common currency weakened during yesterday’s ECB interest rate decision and the press conference of its president Christine Lagarde. Despite the bank keeping rates unchanged as forecasted, it may have sounded more dovish than expected, thus disappointing the markets. Also, the bank officially launched its strategy review and revealed details about the timetable and scope. The review is expected to last until the end of the year albeit the bank’s president stated that “it will be over, when it is over”. Inflation is expected to be one of the main areas of concern as the bank is to change the inflation target definition of “close but below 2%”. Analysts tend to note that the bank could remain on hold throughout the period and place more emphasis on the review in the coming months, should Eurozone’s economic indicator’s agree with the bank’s forecasts. Lagarde also stated that the risks for the area’s growth remained tilted to the downside, yet recent indicator’s show that the risks are “less pronounced”. We could see the common currency being more data driven in the next few days while the attention of EUR traders today turns to the release of France’s, Germany’s and Eurozone’s preliminary PMIs for January. EUR/USD dropped yesterday reaching but not clearly breaking the 1.050 (S1) support line yet reached the lowest point since the 9th of December. We could see the pair maintain a sideways motion today after the stabilisation of the pair, yet today’s financial releases and especially the European preliminary PMIs for January could affect the pair’s direction. Please note that technically, the RSI indicator is at the reading of 30, implying a dominance of the bears, hence we see risks tilted to the downside for the pair, yet at the same time the indicator could be implying an overcrowded short position. Should the pair come under the selling interest of the market once again, we could see it breaking the 1.1050 (S1) support line aiming for the 1.0990 (S2) support level. On the flip side should the pair’s long positions be favoured by the market, we could see it aiming if not breaking the 1.1105 (R1) resistance line.

Increased worries about the spreading of the coronavirus seem to have weakened further AUD, while the same time strengthened safe haven inflows for JPY. Some relief for the markets was in the cards though as the World Health Organization stated yesterday that it may be a “bit too early” to declare the new coronavirus a global threat according to media. It should be noted though that China has set the cite of origin of the virus (Wuhan) under lockdown, cutting transportation networks, something that was characterized as unprecedented by a Reuters report. As the disease spreads further and the death toll rises, we could see the Aussie continuing to weaken, while JPY could strengthen further. AUD/USD dropped yesterday breaking the 0.6850 (R1) support line, now turned to resistance. As the pair has reached the levels, prior to the release of the Australia employment data, which provided a boost for the Aussie during yesterday’s Asian session, we expect the stabilisation of the pair to continue to guide it in a sideways movement. At the same time should worries about the Coronavirus increase, we could see the pair dropping once again. Should the bears take control over the pair’s direction we could see it breaking the 0.6820 (S1) support line, aiming for the 0.6790 (S2) support level. Should the bulls take over, the pair could break the 0.6850 (R1) resistance line and aim for the 0.6875 (R2) resistance hurdle.

During today’s European session we get the preliminary PMI’s for France, Germany, the Eurozone and UK, while in the American session, we get Canada’s retail sales growth rate as well as the US preliminary Markit PMI’s for January and the Baker Hughes oil rig count. As for speakers, ECB’s Lagarde speaks in Davos today. 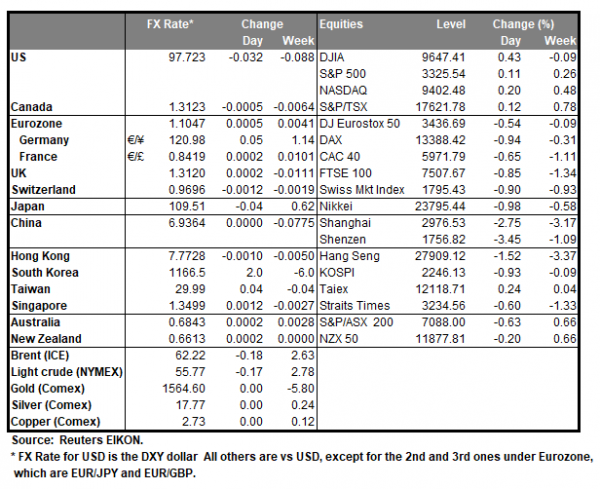