For the 24 hours to 23:00 GMT, the EUR declined 0.24% against the USD and closed at 1.1000 on Friday, as business activity in the Euro-zone remained unexpectedly weak in the month of January, as a decline in the services sector offset a marginal recovery in the trading bloc’s manufacturing industry. Meanwhile, the European Central Bank (ECB) President, Christine Lagarde dismissed a recent uptick in Euro-zone inflation as “really minor” and added that much higher readings would be needed to transform the region. Also, in the US, Markit manufacturing PMI unexpectedly dropped to a 3-month low of 51.70. In the previous month, the Markit manufacturing PMI had registered a level of 52.40. On the other hand, preliminary Markit services PMI recorded its highest level of 53.20 since March last year, in January. In the previous month, Markit services PMI had registered a reading of 52.80.

In the Asian session, at GMT0400, the pair is trading at 1.1029, with the EUR trading marginally lower against the USD from Friday’s close.

Market participants will look forward to the release of German Ifo survey data for January, due in a few hours. Further, the US new home sales for December and the Dallas Fed manufacturing index for January will also garner significant attention today. 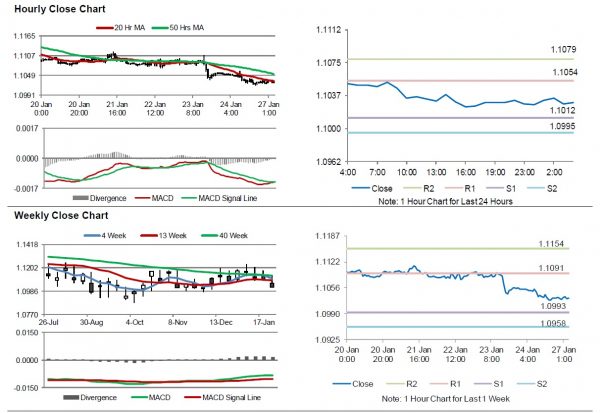