Yellen’s testimony went mostly as expected – with lukewarm optimism of the economy, a downplay of soft data and talk of gradual rises. Whilst the content was mostly a re-run of recent Fed statement, Yellen also added she expects the Fed rates would not have to rise much further and that balance sheet reduction would ‘play out smoothly’.

It is the balance sheet commentary and her expectation that ‘no financial crisis is likely to occur in our lifetimes’ that make us question the due diligence and intentions here. It’s plausible that one would tend to play down financial risks or present the US economy with a slight upwards bias if you suspected it may be your last testimony. And the uncharacteristically calm and dignified atmosphere at this hearing suggested Yellen’s suspicions were widely felt. 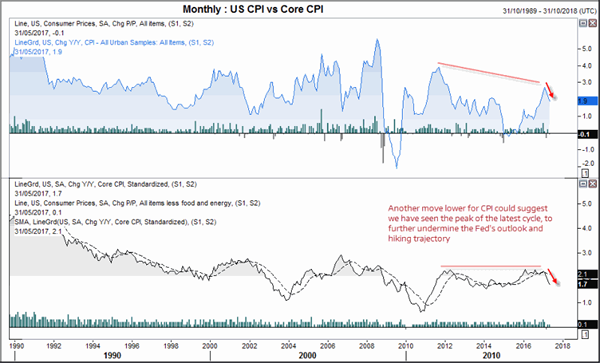 Inflation data on Friday will be closely watched by traders, as another disappointment could suggest we have seen the cycle peak and further downside is ahead. Or at least, this is how traders would likely react. With core CPI moving to 1.7% after getting tantalisingly close to, yet without hitting, 2%. That the Fed were speaking of allowing the economy to overshoot their 2% target last year sounded dubious at the time, yet now inflation moves lower seems almost laughable. Yet we continue to suspect that the real reason they want to raise rates is to allow them rom to cut to at least appear as though they are doing something, before reverting to QE4. The same could be sad for the balance sheet they want to trim, as this can always move higher if required in future. 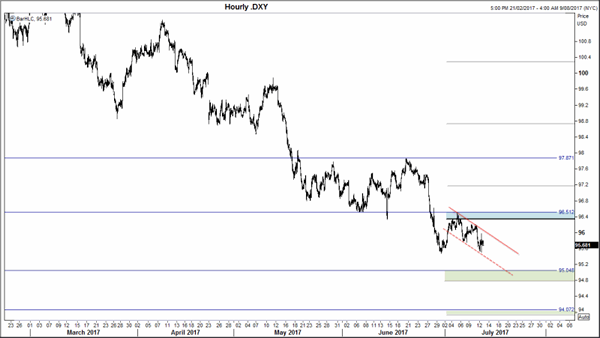 The US Dollar closed the session with a spinning top Doji, which essentially means we had a spike higher and lower, yet finished around the same level as the open. Considering this is when the Whitehouse dominated headlines again for non-policy reasons and Yellen delivered an ad-hoc speech, then this may prove to be a near-term sign of strength. Yet, as we remain below the monthly pivot and the dominant trend is firmly lower, a break of the 95.47 low is the favoured outcome over the coming sessions.

The intraday chart reveals a bearish channel which began at the monthly pivot which began at the monthly pivot. If this holds and helps DXY drift lower, then EURUSD and AUD are poised to push higher form here. The region around 95 houses a likely support level which comprises of the Sep ’16 low and monthly S1. If we reach these levels it will likely coincide with EURUSD hitting 116 and AUD 78c. 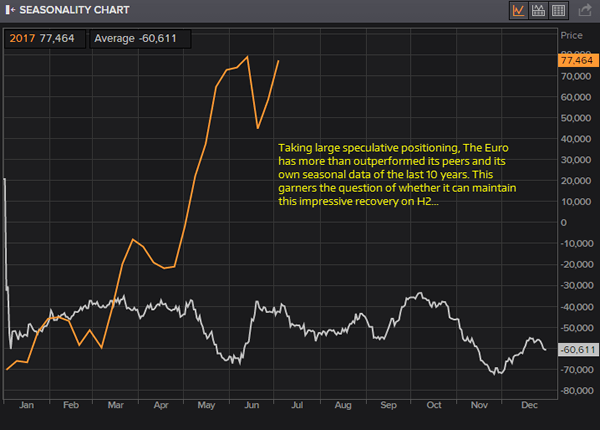 Much of the recent weakness of the US Dollar can be attributed to the strengthening of the Euro. TO further highlight how uncharacteristic this momentum is, we have plotted the large speculator positioning as a 10yr seasonal chart (white line) and plotted it next this year’s net long positioning (orange). Whilst Jan to March tend to move higher anyway, it usually moves sideways in April and retraces in May. Yet instead it advances in March, end of April and all of May. The question we now raise is whether it can maintain this level of bullish repositioning for H2. Technically and fundamentally we think it can finish the year high than it is now, yet there is likely you be a large correction or two along the way. As we are yet to see one, then it is something to consider as we get further towards August. 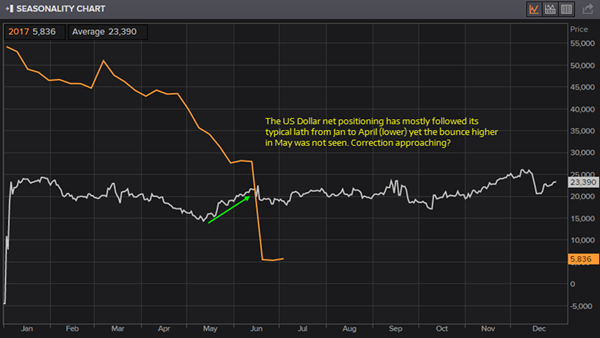 The US Dollar has mostly followed its 10-year path by moving lower this year, only we did not see a rebound in May. As shorting the Dollar is becoming a popular theme and DXY reaches the next round of support zones, then it is not impossible to believe a rebound could be on the cards. 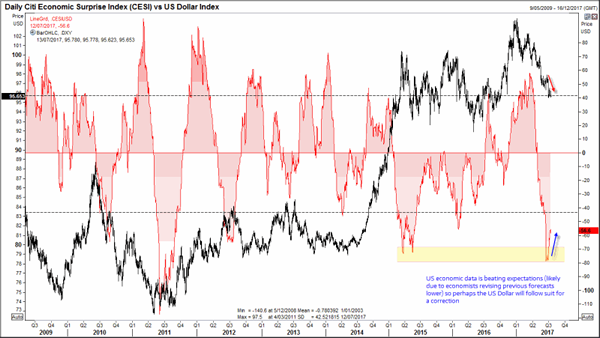