Headline inflation was stronger than expected in January, matching its fastest year-over-year pace since mid-2018. That hawkish surprise was offset to some extent by a slight dip in core inflation, which has been close to the Bank of Canada’s 2% target for two years now.

On-target inflation was one of the key reasons the BoC remained on the sidelines in 2019 while many other central banks, including the Fed and ECB, lowered interest rates. But while core inflation remains on the mark (and headline even firmer), the story has changed. Slower growth over the second half of last year means, in the BoC’s view, the economy is now operating with some slack. 2% core CPI is backward-looking and reflects the economy previously running close to full capacity.

So we don’t see current inflation readings as a barrier to the BoC cutting its benchmark rate to support growth and get the economy back to its potential. Indeed, market odds of a rate cut were only slightly dented by this morning’s data and a move is fully priced by the October meeting. Our own forecast is for a move in April, when we think the BoC’s tolerance of sluggish activity (coronavirus, the GM Oshawa closure, and rail disruptions seem to guarantee another quarter of sub-trend GDP growth in Q1/20) will wear thin. 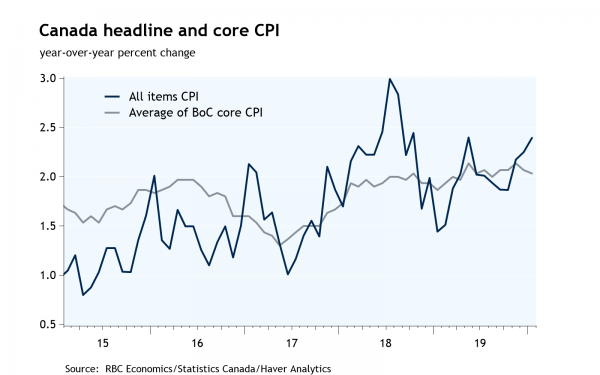