The JPY continued to weaken against the USD, as in a paradox, safe haven flows seem to weaken the Japanese currency. The difference in this case according to analysts, could also have been caused by the recent weak Japanese financial data, spreading fear among investors which are seeking a relative safety in the USD. It should be noted that economic activity in the crucial Japanese manufacturing sector suffered one of its steepest contractions since 2016, increasing worries about the performance of the Japanese economy. On the contrary the market seems to believe that the US economy is to be less affected by the coronavirus. In contrast to the weakening of JPY alternate safe havens such as gold are in a gaining momentum, providing more confidence. We could see JPY continuing to be influenced by safe haven flows, yet we also expect financial releases to play an increased role in its direction. USD/JPY continued its rally breaking the 111.70 (S1) resistance line, now turned to support, and reached a new 10 month high. We maintain a bullish outlook for the pair, yet some correction could be in the cards for the pair after its steep rise. Please note that the RSI indicator below our 4 hour chart, is still above the reading of 70, certifying the bull’s current dominance, yet at the same time could be implying a rather overcrowded long position. Should the bulls maintain control over the pair, we could see it breaking the 112.40 (R1) resistance line and aim for the 113.20 (R2) resistance hurdle. On the other hand, should the bears take over, we could see the pair breaking the 111.70 (S1) support line and aim for the 111.00 (S2) support level.

The common currency seems to have started to stabilize against the USD yesterday, albeit market sentiment seems to be still unsure. It should be noted that the common currency is allready at very low levels against the greenback, which could provide some benefits for European exports. However, such low rates could cause the fury of the US President, who had complained a number of times in the past about the advantage of a cheap EUR. Its characteristic that the US in the past, were on the brink of characterizing the Eurozone as currency manipulators, which could spark new discussions about possible tariffs on European cars. We expect the EUR to be more data driven today, given that the important preliminary PMIs for February are due out. EUR/USD maintained a sideways movement above the 1.0770 (S1) support line. As the pair seems to be breaking the downward trendline incepted since the beginning of the month, we tend to switch our bearish outlook in favour of a sideways movement, yet today’s financial releases could affect the pair’s direction. Should the pair come under the selling interest of the market once again, we could see it breaking the 1.0770 (S1) support line, aiming the 1.0700 (S2) support level. Should on the other hand the pair’s long positions be favoured by the market, we could see it breaking the 1.0830 (R1) resistance line, aiming for the 1.0885 (R2) resistance level.

Today during the European session, we get preliminary PMIs for February from France, Germany, the Eurozone and the UK, while later on we get Eurozone’s final HICP rate for January. In the American session, Canada’s retail sales growth rate for January, while from the US we get the Markit Preliminary PMIs for February, the existing home sales for January and the Baker Hughes oil rig count. During Monday’s Asian session, we get Australia’s capital expenditure growth rate for the 4th quarter of 2019, while Japanese markets are to be closed. As for speakers please note that Dallas Fed President Kaplan, Fed’s Brainard, ECB’S Philip Lane and Fed’s Clarida are scheduled to speak. 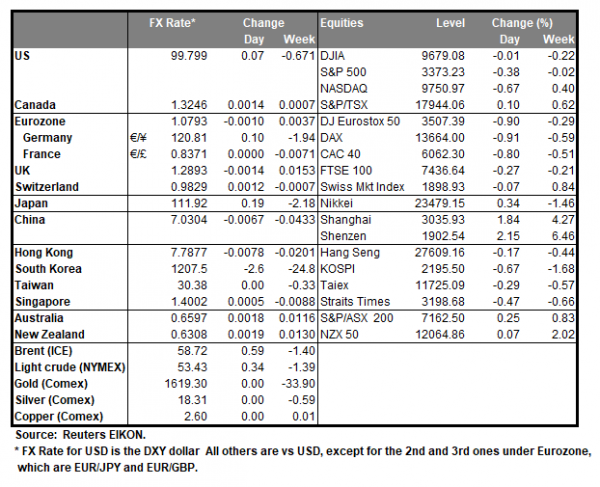