A snapshot view of large speculative positioning from the weekly CFTC report and analysis of related futures markets.

The Yen experienced the largest weekly change to positioning, with +34.2k shorts added to drag net exposure to its most bearish level since June 2016.

The US Dollar Index is on the verge of switching to net short, although price action following the report suggests this may have already occurred.

DXY: The S Dollar Index is on the verge of flipping to net short. Price action following Tuesday’s close (when report is compiled) suggests we may already be net short as the index touched a 10-month low by the close. The rise of gross short positioning takes it to its highest level since Q1 2016 and if data continues to disappoint, then DXY is likely headed for 93 over the coming weeks. 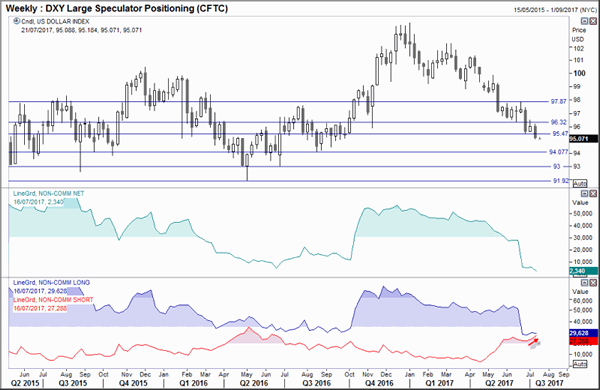 EUR: The Euro continued its ascent, helped higher by a dovish Fed and weak US inflation. 116 is the next target and we will seek to buy the dips whilst above last week’s low. The steady stream of gross longs continues to rise and gross shorts remains subdued, which is the sign of a healthy trend. However, a quick glance at the charts suggests commodity currencies benefitted from the weak US Dollar more than Euro did so, whilst we remain bullish on Euro, it is not necessarily the best outperformer around a weaker US Dollar. 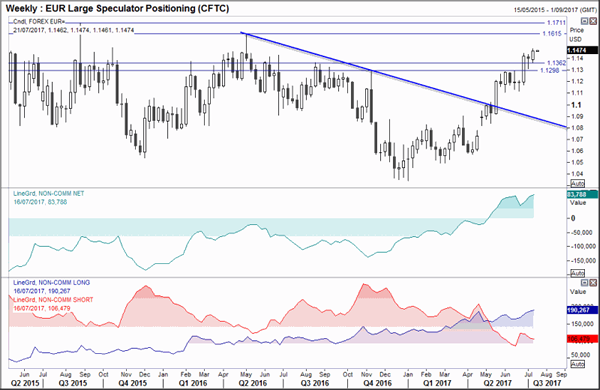 JPY: The Yen respected 8,745 support to further delay the potential double top. If we ray from here then we can consider a triple top of triangle formation. Yet speculative positioning appears to be front running a bearish break. Gross short positioning has risen sharply these past three weeks which has dragged the net short interest to its lowest level since 2015. Fundamentally we are bearish the Yen so now await the technicals to confirm what the bearish speculators already suspect – a bearish follow-through over the coming week/s. 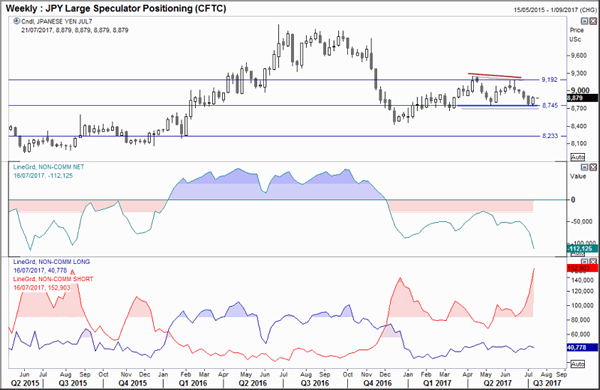 AUD: The Australian Dollar jumped to the 2016 high on Friday after making light work of the neckline. A break of 0.7818 appears imminent, which then puts 0.80 and 0.8151 in focus. That recent gains have been seen as gross longs also rise adds extra confidence in the move. However, we also know the RBA do not want their currency to rise too much so there may be concerns of an easing bias to return if the rally moves too far too fast. Technically further gains appear more likely on the near-term so it remains in our bullish watch list this week. 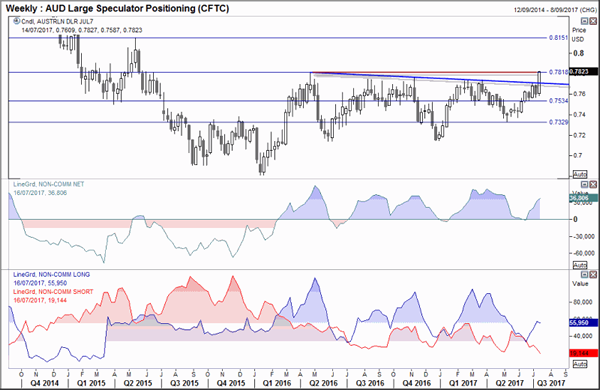 CAD: The Canadian Dollar has seen a heavy reduction of gross short exposure, some of which has flipped to the long side. What was originally a rally fuelled by short-covering is now supported by fresh bids. The BoC raised rates last week, yet also surprised markets with a hawkish statement. So, like AUD, CAD remains in our bullish watchlist for the week as technicals and fundamentals remain supportive. 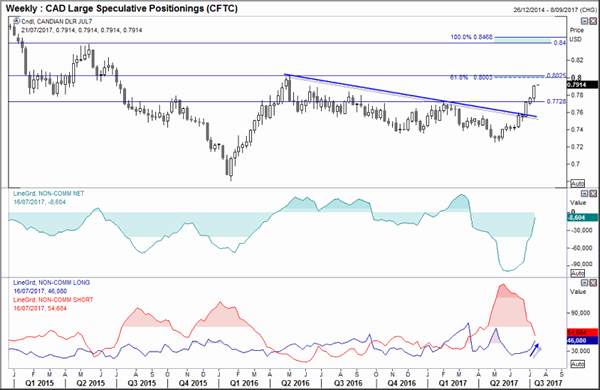