The greenback remained on the defensive against a number of other currencies yesterday as a bearish sentiment influenced from a possible rate cut by the Fed and coronavirus worries affected its direction. Worries about the possible spread of the coronavirus in the US increased, as US Health officials alerted citizens to begin preparing for such a scenario. The announcement signals a change of tone for the US health agency, which until now had focused mainly on preventing the virus from entering the country. It should be noted that the US officials making the statements stated that it is no longer a question of whether the disease will arrive in the US, but when it will arrive and how severe a US outbreak may be. Fed’s Vice Chair Clarida stated that the Fed is closely watching the emergence of the coronavirus but also noted that it is still too early to speculate about the size or the persistence of the possible effects. It should be noted that currently the market seems to be increasingly pricing in a possible rate cut of 25 basis point by June at a rate of 75% , while a second rate cut is also expected by September. We expect the USD to be data driven yet further statements by Fed officials could also be gaining on attention. USD/JPY moved lower if compared to yesterday’s Asian session and currently seems to be hovering just above the 110.35 (S1) support line. We tend to maintain a bearish outlook for the pair and for it to change we would require a clear breaking of the downward trendline incepted since the 21st of February. Should the bears remain in control of the pairs’ direction, we could see it breaking the 110.35 (S1) support line and aim for the 109.70 (S2) support level. Should the bulls be in charge of the pair’s direction, we could see it aiming if not breaking the 111.00 (R1) resistance line aiming for higher grounds.

… while the Loonie remains stable…

The Loonie remained rather stable against the USD yesterday, maybe a touch stronger as market expectations for the Canadian economy remain positive. It should be noted that the CAD remained rather stable despite oil prices taking a dive on expectations of weak demand due to the new coronavirus. Analysts seem to underscore the possibly temporary nature of this effect, as the Canadian economic outlook largely depends on black gold’s prices. Also, Canadian bond yields seemed to retain a tendency to fall, yet the gap with respective US bond yields seems to be favoring the Loonie, at least to the short to medium term. Please bear in mind that Canada’s GDP is due out on Friday while the BoC is to deliver an interest rate decision next week, hence we could see the market start positioning itself. We expect three main factors to influence the CAD ’s direction in the coming days, namely oil prices, monetary policy and financial data. USD/CAD maintained a rather sideways motion yesterday between the 1.3230 (S1) support line and the 1.3335 (R1) resistance line. We maintain our bias for a sideways movement for the pair between the two prementioned boundaries. Should the pair come under the selling interest of the market, we could see it breaking the 1.3230 (S1) support line and aim for the 1.3125 (S2) support barrier. Should the pair’s long positions be favoured by the market, we could see it breaking the 1.3335 (R1) resistance line and aim for the 1.3430 (R2) resistance level.

Today during the European session, we get from France the consumer confidence for February. During the American session, the US releases include the number of new home sales as well as the EIA weekly crude oil inventories figure. During tomorrow’s Asian session, we get from New Zealand the trade data as well as the country’s business outlook both for January, while from Australia we get the CapEx growth rate for Q4. As for speakers, ECB’s Lagarde, Dallas Fed President Kaplan, Chicago Fed President Evans, Minneapolis Feed President Kashkari and BoJ’s Amamiya are scheduled to speak. 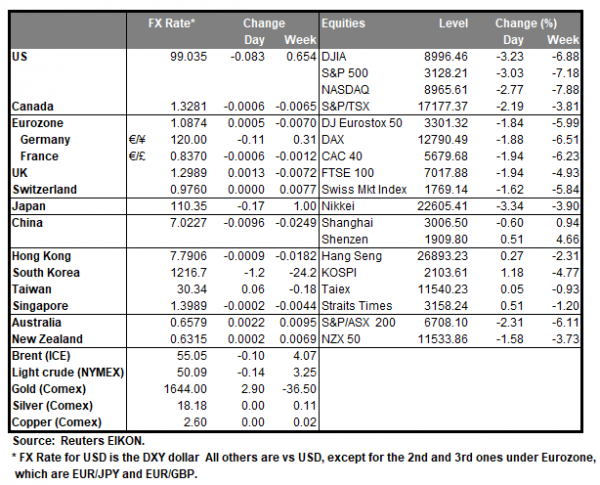 US Mnuchin: We have $6 trillion to put in the economy