USD tumbled against the EUR and JPY yesterday as investors have increased their bets for a possible rate cut by the Fed, due to worries for the spread of the coronavirus and its economic effects on the US intensify. The market seems to be currently fully pricing in a possible 25 basis points rate cut by the Fed as early as in its next meeting in March. It seems that rate cut expectations, coupled with lowering US Treasury yields and the stock markets experiencing one of their worse weeks since the 2009 crisis made USD far less attractive than a week ago. At the same time the ECB played down the possibility of an imminent easing of monetary policy and Germany seems to be sincere in providing a modest fiscal stimulus at least, boosting the common currency, while JPY shines as a safe haven once again. Should interest rate differentials feed the markets we could see the EUR/USD rising, while traders seem to focus on Germany’s and France’s HICP releases. EUR/USD rallied yesterday, breaking the 1.0940 (S1) resistance line, now turned to support and is currently testing the 1.1000 (R1) resistance line. We tend to maintain a bullish outlook for the pair as long as it remains above the upward trendline incepted since the 20th of February. Please note that the RSI indicator remains steadily over the reading of 70, certifying the bull’s dominance, yet also implying a rather overcrowded long position. Should the bulls maintain control over the pair, we could see it breaking the 1.1000 (R1) resistance line and aim for the 1.1060 (R2) resistance level. On the other hand, should the bears take over, we could see the pair aiming if not breaking the 1.0940 (S1) support line.

…while the Loonie weakens on low oil prices…

The Loonie tumbled against the USD yesterday, causing USD/CAD to reach a six-month high, as oil prices tumbled on coronavirus worries mostly. Analysts note that albeit interest rate differentials continuing to move against the USD, weaker oil prices are a strong headwind for the Canadian currency. As was expected the stability of the CAD proved temporary, as oil inventories are rising and worries for a slowdown of the global economy are intensifying. It should be noted that the CAD weakened even though the current account deficit narrowed, outperforming market expectations yesterday. We expect CAD trader’s attention to turn to today’s GDP release as a downside surprise could be a game changer for BoC’s rate decision next week. USD/CAD rose yesterday, breaking the 1.3430 (S1) resistance line, now turned to support. We tend to maintain a bullish outlook for the pair as the rise is steep and the direction seems stable. Please note that the RSI indicator reached over the reading of 70, verifying that the buyers overtook sellers clearly. Should the market continue to favor the pair’s long positions, we could see it aiming if not breaking the 1.3525 (R1) resistance line. Should the pair come under the selling interest of the market, we could see it breaking the 1.3430 (S1) support line and aim for the 1.3335 (S2) support hurdle. 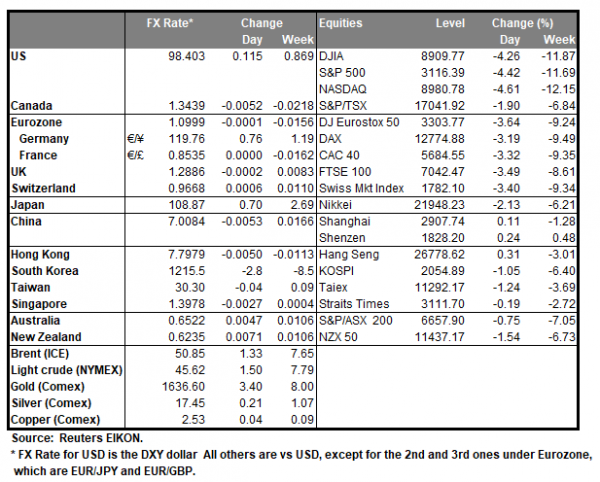 US 500 Index’s Correction Weakens Under 100-SMA