The latest US employment data will hit the markets at 13:30 GMT on Friday and although forecasts point to another decent report, that may not be enough to stop the Fed from cutting rates again soon amid virus concerns. As for the dollar, there might be more pain to come in the near term as continued Fed rate cuts would further erode its carry appeal, especially if the ECB fails to live up to the market’s dovish expectations next week. That said, the bigger picture doesn’t seem as negative.

For the first time since the 2008 crisis, the Federal Reserve took emergency action this week, cutting interest rates by half a percentage point outside of a regularly scheduled meeting in a move designed to shield the American economy from the impact of the coronavirus. Policymakers also kept the door wide open for more stimulus soon, indicating they stand ready to “act as appropriate”.

Investors took that signal seriously, with money markets fully pricing in another quarter-point cut at the next meeting on March 18, and another after that by April. In other words, traders are saying the Fed will need to do more in the coming months, as the virus spreads through the US and takes its toll on economic activity. 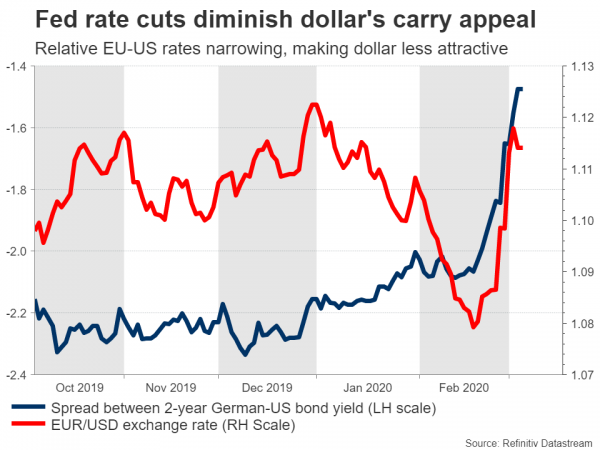 Sadly, cutting rates is a weak antidote for a supply-side shock like this one. Monetary stimulus will do next to nothing to fix broken supply chains, and even the positive effects on demand are questionable if virus fears intensify enough for consumers to curtail spending on entertainment activities, for instance.

In this context, even if the upcoming data are much stronger than expected, that may not be enough to convince investors rates won’t cut again soon. The Fed is not reacting to any real weakness in the US economy – rather, it’s insulating the economy from the future virus impact.

As such, the risks surrounding the dollar from this jobs report seem tilted to the downside. A positive surprise is unlikely to materially dispel rate-cut expectations and therefore, any positive reaction in the dollar may be only modest. On the contrary, a disappointment could signal the economy was already in trouble before the virus hit, so the situation may worsen rapidly. That would cement expectations for another near-term rate cut and by extension, hurt the dollar.

Turning to the actual data, nonfarm payrolls are forecast to have risen by 175k in February, less than the 225k in January but still a solid number overall. Likewise, the unemployment rate is seen steady at 3.6%, while average hourly earnings are expected to have cooled to 3.0% in yearly terms, from 3.1% previously.

Looking ahead, the coming weeks could bring more pain for the greenback. The Fed seems primed to cut again before long, as it tries to calm markets and keep the US economic expansion alive. 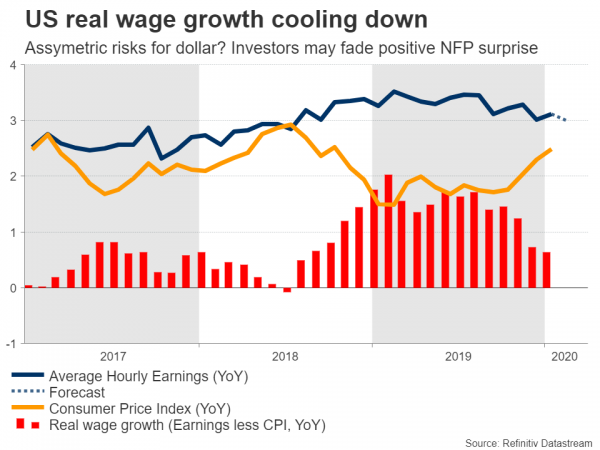 Across the Atlantic Ocean though, the European Central Bank (ECB) may not act as powerfully. With rates deep in negative territory already, the ECB has limited ‘firepower’ left, and policymakers are divided about whether any more stimulus would truly boost the struggling Eurozone. And yet, markets are assigning a ~90% probability for the ECB to cut rates by 10 basis points next week. That may be a bridge too far for many policymakers, implying that there’s a very real risk the ECB underdelivers and for example introduces only targeted measures for businesses affected by the virus instead. That would likely lift the euro and thus, weigh on the dollar.

Carry unwinding to continue, for now

In general, the latest relief rally in euro/dollar has been driven primarily by an unwinding of carry trades. With European interest rates hitting rock bottom in recent years, the euro has become a prominent funding currency, meaning that investors borrow in euros to buy foreign assets with higher returns, like US stocks or bonds. When a crisis hits, many of these riskier trades are closed, bringing money back to the Eurozone and boosting the euro.

This process could continue for now, keeping the euro supported versus the dollar as investors unwind more carry bets, spooked by the Fed’s rate cuts.

Looking beyond the next few weeks though, this doesn’t look like the beginning of a persistent dollar downtrend either. The US economy is much healthier than the Eurozone, where Italy will likely enter a virus-induced recession soon, threatening to push the entire bloc’s growth into negative territory. Meanwhile, US authorities have much more policy room to react, and the Fed’s preemptive action reduces the possibility of a US recession.

At some point, the question becomes which region is growing faster and is attracting more capital inflows, and that is more likely to be the US over time.

Technically, another wave of advances in euro/dollar could stall near 1.1210, with an upside break turning the focus to the August high of 1.1250.

On the downside, the bears may stall initially at 1.1095, where a negative violation would turn the focus towards 1.0990.