In early March we released a forecast that looked for Canada’s economy to suffer a short, sharp decline in activity. The spread of COVID-19, the imposition of social-distancing measures and plunge in oil prices means we have reassessed the depth and duration of the downturn. The economy has already entered a deep downturn that we expect will rival the worst year of the Great Recession. The pressure on the economy will be widespread with the services sector hit by a severe demand shock as social distancing keeps consumers and workers at home. On the goods producing side of the economy, the disruption of supply chains and collapse in the energy sector will exert further downward pressure on growth. No provinces will be spared with some provinces like Ontario and Quebec locking down all but essential services and oil-producing provinces like Alberta suffering from the additional shock of sharply lower energy prices.

Realistic confidence bands around economic forecasts at the moment are exceptionally wide – and much depends on the extent to which social distancing measures will be successful in slowing the spread of the virus. But at this point we think it is reasonable to pencil in a 2.5% drop in Canadian GDP for the year, including a decline in Q2 that will likely dwarf any other drop since at least the 1960s. The unemployment rate will rise alongside. Indeed, the rate currently is probably already 10% and we expect will peak at north of 11% on a monthly basis, perhaps reaching that level as soon as April.

The Bank of Canada and governments have been quick to respond to the crisis unveiling a wide range of policies aimed at helping companies and workers stay afloat. However additional measures are needed and we anticipate the Bank of Canada will cut its policy rate further to just 0.25% and turn to large scale asset purchases also known as quantitative easing, a tool that has not been used in Canada. We expect the bank will start by buying government of Canada securities. Governments are also expected to unveil more programs aimed at ensuring businesses remain solvent and workers have jobs to return to once the crisis has passed.

The staggering impact of social distancing

Social distancing, which all experts assure is a necessary action to save lives and prevent the spread of COVID-19, represents an unprecedented economic shock for all countries. Many of the service-sector industries that typically act as an ‘economic buffer’ in a recession will be dramatically impacted by social distancing. The drop in service sector activity and the oil price shock, combined with ripples from slower global demand and supply-chain disruptions that will hit the industrial sector, means we are headed for a period of unprecedented softness in economic activity. Some of that lost activity will bounce back relatively quickly when schools and other businesses reopen. And the more that can be done from a policy perspective to bridge-the-gap and get workers and businesses through the coming months, the quicker the growth bounce-back could be. But the reality is that with the duration of the virus’ impact unknown and ongoing fear of a recurrence of the outbreak, a return to ‘normal’ is unlikely to occur quickly.

Service-sector to lead the downturn

The service sector normally acts as a buffer in an economic downturn. Most recessions start with a drop in the goods sector and it is the spillover from softer spending from laid off goods sector workers that accounts for a lot of the pullback in service-sector activity. In the 2008/09 downturn, for example, goods-sector employment fell by almost 8% peak-to-trough. Overall private service-producing employment fell 1.7%. Retail employment by about 2%. Accommodation and food services employment fell a larger 5%, but still less than goods employment. And all of those layoffs occurred over time, spread over about a year.

This time around is very different. Social distancing efforts are shutting down wide swaths of the service-sector. By our count, the sharp fall in activity in just five industries, education, retail trade, accommodation & food services, and arts & entertainment alone could produce a drop in GDP that rivals the record economy-wide plunge recorded in 2009 of 8.7%. Falling global demand, disrupted supply chains, and lower global oil prices will see goods producing sectors slump as well. Absent a dramatic and unexpected easing in the spread of the virus, the Canadian economy is headed for a double-digit decline in GDP in the second quarter of this year. We are now penciling in an 18% drop in Q2 GDP. This could underestimate the decline if the number of new virus cases does not begin to ease relatively quickly. 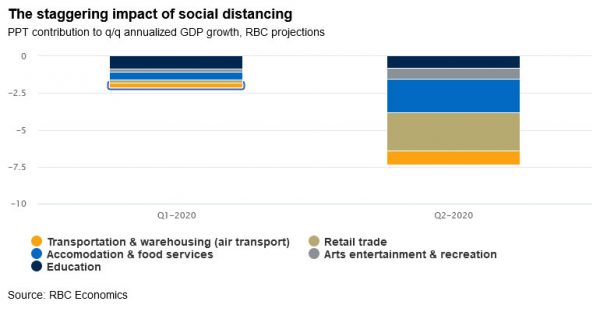 Canada’s energy sector is a casualty not only from plunging demand as the virus cuts into activity at home and abroad but from the price war that erupted in early March. The combined impact pushed prices down by about 50% over two weeks. The low level of prices will add even further downward pressure on the industry which was only just emerging from severe downturn of 2015-16. Investment activity had already fallen significantly and any prospect of a rebound in 2020 has been dashed with companies cutting capital budgets aggressively. Low oil prices and a strong US dollar sent the Canadian currency tumbling below 70 US cents. Even after the peak of the virus impact, low oil prices are likely to continue to weigh on Canada’s currency.

The labour market impact will also be dramatic – and unlike anything we have seen before in Canada. And that labour market pullback is already well under way. The largest increase in the unemployment rate in a single month in Canada was 1 percentage point, during the 1980s economic downturn. The 500k employment insurance claims Prime Minister Trudeau reported were filed last week points to more than 2 percentage point increase, in just one week. The unemployment rate has already probably spiked above 10% in Canada.

The service-sector industries most highly impacted by social distancing are largely made up of hourly workers. About 90% of workers in the retail and accommodation & food services sectors are hourly. That ratio is ~80% in the arts & entertainment sector. A higher share of education workers are salaried – and teachers are by-and-large still being paid at the moment. Some sectors might actually see jobs created in positions like couriers as more people shop online, or grocery stores and food manufacturers. Many of the jobs cut in the early days of the downturn will be workers closer to the lower-end of the pay scale. In other words, more vulnerable workers will bear the brunt of job market dislocations.

The light at the end of the tunnel is that social distancing is at its core is designed to trade off short-run economic and social pain with getting the spread of the virus under control. We have seen measures like these work in other parts of the world (mainlaind China, Hong Kong, South Korea, etc.). It is our expectation that as the virus is brought under control and social distancing measures ease, so will the economic drag. As the mantra on social distancing goes to ‘flatten-the-curve’, the economic mantra should be ‘bridging-the-gap.’ As long as businesses can weather the near-term storm, there is potential for a significant share of laid off employees to be re-hired relatively quickly, certainly in industries like education (as students return to school). The recovery in other areas will take longer – the damage to households psyche and fear of another outbreak of the virus means that sectors like retail, accommodation and food services, and arts & entertainment are more likely to see a gradual grind higher than a sharp bounce-back.