We all knew it’d be bad, but the record 3.28 million people filing for unemployment insurance is still an arresting figure, and, like the first glimpse of the big shark, it puts the scope of the crisis in perspective.

Initial jobless claims, or the number of people filing for unemployment benefits for the first time after losing their job, soared to an all-time record of 3.3 million, for the week ended March 21. This does not merely exceed the previous record of 695K in 1982, it more than quadruples it. It also dwarfs all other abrupt shocks, such as 9/11 or hurricanes Katrina, Sandy or Harvey.

Today’s report emphasizes not only the magnitude of COVID-19-related job losses, but also the speed at which they occurred. During the Great Recession, nonfarm employment fell peak-to-trough by a total of 8.7 million, but that decline occurred over two years, from January 2008 to February 2010. We are likely to see an even larger number of workers lose their jobs in only a matter of weeks, if not already.

Four Reasons Why This is Only the Beginning

Today is only a prelude of what is to come. The initial factor driving the unprecedented spike is the fact that states and municipalities mandated widespread closures of consumer-facing industries gradually, with some like San Francisco and New York leading the country, and others taking more drastic steps only this week. Second, even in the areas with the earliest shutdowns, we suspect many employers initially tried to maintain somewhat normal operations, with restaurants switching to delivery and takeout for example, but have since had to lay off staff after succumbing to drastically lower demand or stricter shelter-in-place orders. Third, many states reported severe backlogs—their systems were simply not designed to process the sheer volume of claims they faced. And fourth, laid-off workers may simply delay their claims a few days or weeks as they deal with a host of other logistical challenges such as school and daycare closures.

Claims measure the flow of workers out of employment, while the more widely followed nonfarm numbers are reported as a net of new hires minus departures. But both sides of the equation here are troublesome, as hiring plans have largely been put on hold across the country as well. The March nonfarm employment report will be released next Friday, April 3, but the timing of the survey, which was conducted during the week ended March 14, means that we will likely only see only a moderate fall in employment. The April report will bear the brunt of the damage, with job losses expected in the millions, and scope for downward revisions to March as well.

Help is Already on the Way: Fiscal and Monetary Measures

It takes a true optimist to find silver linings in today record-shattering report, but keep in mind that unlike other recessions, these layoffs are the known outcome of a deliberate strategy to protect health and save lives by stopping economic activity. The Federal Reserve is keeping the financial system liquid and last night’s fiscal package represents the largest peacetime spending effort in American history. 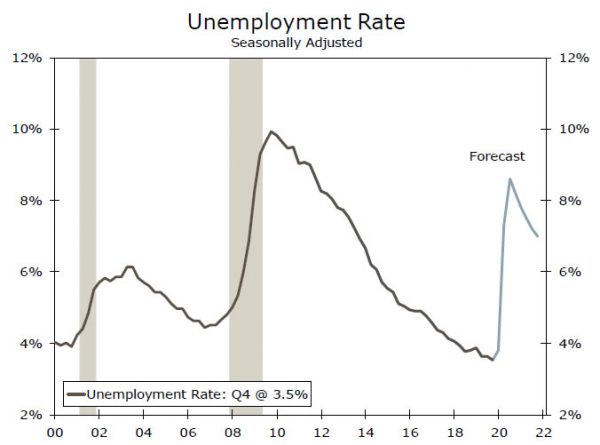 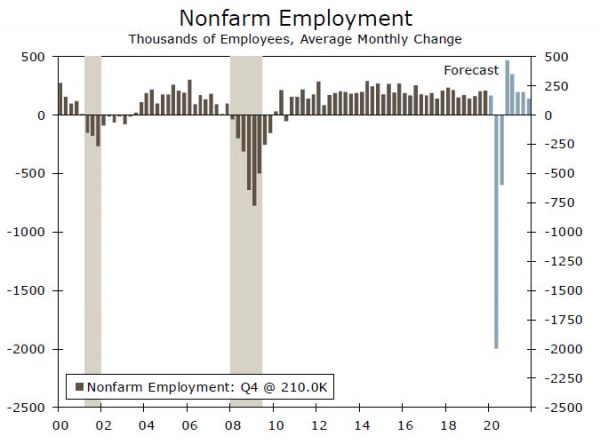 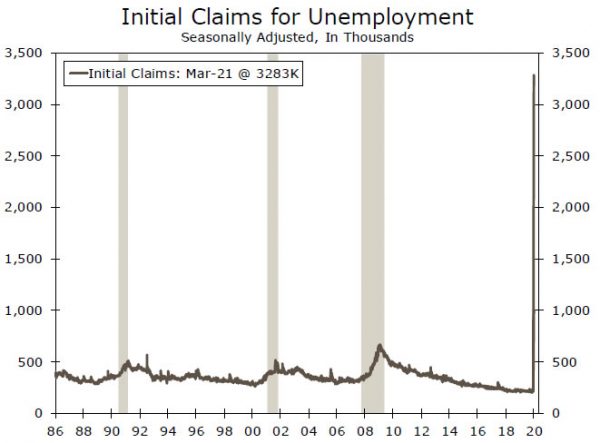