It’s a busy data week in America, as besides the nonfarm payrolls report, there’s also the latest ISM manufacturing and non-manufacturing PMIs coming up on Wednesday and Friday respectively, both at 14:00 GMT. These surveys will give us a taste of how much damage the virus has inflicted on the US economy and therefore, of how deep the upcoming recession will be. As far as economic data go these days, these are extremely important, and a serious disappointment could derail the latest rebound in stocks. That said, any drop in the dollar might be short-lived.

The lockdown measures taken to slow the spread of the virus will undoubtedly hit companies across the United States, with industries such as tourism, bars, and restaurants, likely to be decimated first as consumers are told to stay at home. Very little economic data has been released so far that captures the scope of the damage but that changes this week, when the ISM business surveys for March are released.

Forecasts suggest that the manufacturing index will drop to 45.0 from 50.1 in February, while the non-manufacturing print is expected to fall to 44.0 from 57.3 previously, both entering contraction territory. If these numbers are met, that would signal the US economy is already in recession, which will probably deepen in the coming months as more states go into quarantine and social-distancing measures are tightened further.

As for the risks surrounding these forecasts, it’s possible that we see a positive surprise in the manufacturing print relative to expectations, but a negative surprise in the non-manufacturing index. This has been the case so far in the Eurozone, UK, and US Markit PMIs for March. It suggests that economists overestimated the initial impact on manufacturing, which seems to be holding up quite well considering, but underestimated the hit on the service sector.

Can the recovery in stocks last?

Turning to the market reaction, while the manufacturing PMI on Wednesday might not rattle investors much, especially if it’s slightly stronger than the consensus, it might be a different story for the non-manufacturing print on Friday. Remember that the manufacturing sector only accounts for ~12% of the US economy. 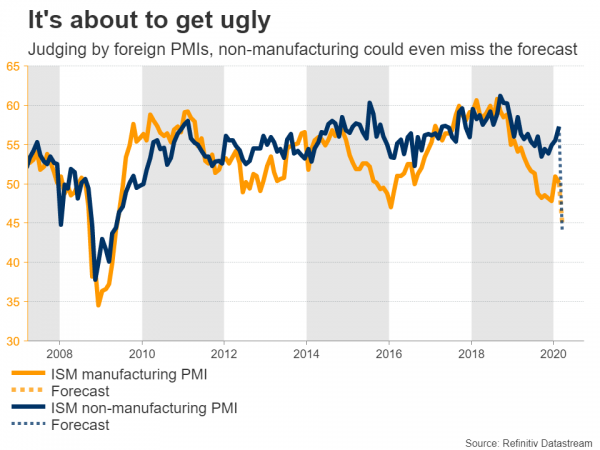 Hence, how much the non-manufacturing index drops could be the most important variable for markets this week, as it will reveal how deep the ensuing downturn might be and it will most probably feed into many forecast models. The jobs report on Friday could also be important, but since those employment numbers were collected in early March and therefore won’t reflect the dire developments of the past two weeks, investors might see them as somewhat outdated.

In case of a major disappointment, stocks could come back under selling pressure as fears of a deep recession come back into the spotlight.

In the FX arena though, things aren’t quite that simple. While disappointing data typically hurt a nation’s currency, the outlook for the dollar still seems positive in an environment of continued market turmoil. Indeed, the greenback has been trading like a safe haven amid all the chaos lately, and with a global crisis now virtually certain, even worrisome economic data might not be able to hold the dollar down for long.

Having said that, the dollar’s performance might be mixed going forward. While it could outperform export-oriented currencies like the aussie, kiwi, loonie, and even the euro, it could underperform traditional safe havens such as the yen and the Swiss franc during a slump.

The other things to consider is growth outperformance. Before this crisis, the US was arguably the strongest major economy, and it has since launched massive stimulus to negate this shock. Europe, on the other hand, was barely growing and has enacted less powerful stimulus. Hence, while both economies are headed for a downturn, America’s recession might be shallower, which argues for a gradual drift lower in euro/dollar.

Looking at euro/dollar technically, if the bears stay in control and pierce back below 1.0990, their next target might be the inside swing high of 1.0830.