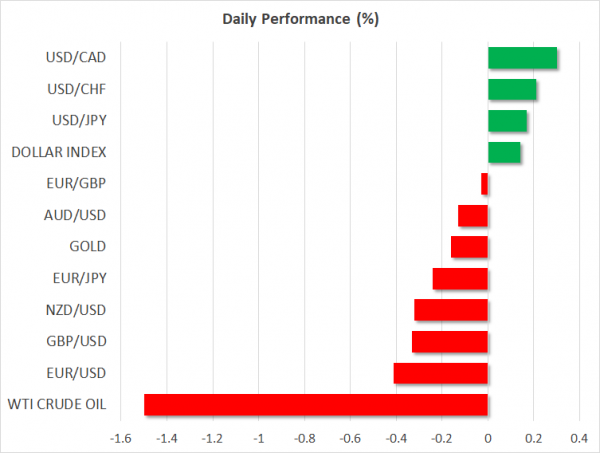 Oil prices saw their biggest daily jump on record on Thursday after President Trump tweeted that Russia and Saudi Arabia – the world’s biggest oil producers after the United States – are about to slash output. But just as traders began questioning the likelihood of the Saudis and Russians reaching a truce so quickly, the Kremlin poured cold water on Trump’s claim that the Russian president had spoken with Saudi Arabia’s crown prince.

Brent crude shot up by nearly 40% before retreating sharply to end the day 21% higher, while WTI closed up almost 25%.

In his tweet, Trump had signalled at cuts of between 10-15 million barrels (without specifying if this was per day), which would be a very substantial amount if it was. The move is an obvious attempt by the US president to put pressure on the two sides to end their price war and stabilize the oil market in what is an unprecedented time for the world economy right now.

Although Trump had initially welcomed the slump in oil prices on the thinking that lower gasoline prices would do wonders for his popularity at home, prices have fallen so low that they are damaging America’s shale industry, which is already reeling from the virus crisis.

Still, hopes are high that Russia and Saudi Arabia will be able to resolve their differences as the Saudis have called for an OPEC+ meeting, which could take place as early as next week. The question is, will the club agree to big cuts without non-OPEC+ countries also agreeing to play their part in balancing the market?

Stocks struggle to hold onto gains as oil boost eases

Global stocks slipped on Friday despite gains of more than 2% on Wall Street overnight as the rally in oil prices quickly dried up. Energy shares were lifted yesterday from the surge in oil prices, pulling the main indices higher.

Not even shockingly poor weekly jobless claims numbers out of the United States were able to spoil yesterday’s positive run as the prior week’s similarly dismal readings had somewhat prepared investors of what’s to come as the COVID-19 crisis unfolds.

Nevertheless, equity markets are relatively stable today, with US stock futures pointing to losses of less than 1% for the Dow Jones and S&P 500.

Dollar at one-week high ahead of jobs report

In the currency markets, there was no stopping the US dollar amid ongoing demand for liquidity as the virus crisis is proving to be anything but temporary. The dollar index is up 0.4% and on track for weekly gains of 2.2%.

The opposite was true for the euro, however, as the single currency breached the $1.08 level, extending its slide for the week to more than 3%. The euro has been dogged by concerns that EU leaders are not responding fast enough to the virus pandemic and have yet to take decisive action in terms of additional EU support for virus-stricken member states. A surprise downward revision in the Eurozone’s services PMI for March further weighed on the currency.

The pound and aussie also lost ground versus their US counterpart, while the Canadian dollar barely budged today, showing only a muted response to the fluctuations in oil prices.

All eyes later today will be on the nonfarm payrolls report and the ISM non-manufacturing PMI out of the US. The American economy likely shed jobs in March for the first time in a decade. But given that the survey is conducted in the first half of the month, it won’t provide a full picture and investors might instead focus on the ISM survey to get a clearer idea of the virus damage on the economy so far. 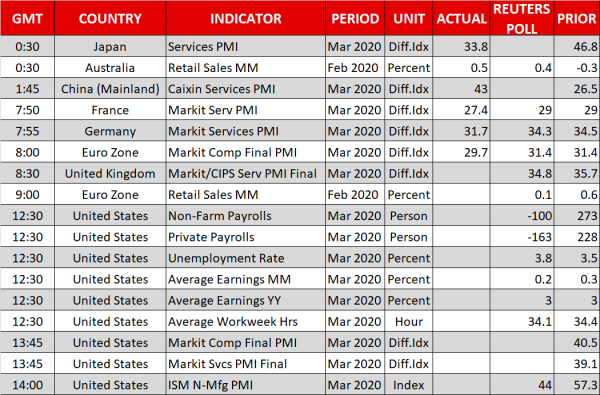