With the number of new daily cases of coronavirus in Britain now rising faster than in other European countries, dashing hopes of an early exit from lockdown, flash PMI and retail sales releases will draw interest this week. The Purchasing Managers’ Index (PMI) by IHS Markit/CIPS is due on Thursday at 8:30 GMT and retail sales data will follow on Friday at 6:00 GMT. In the meantime, the pound is struggling to hold onto its recent gains versus the US dollar as the UK government’s handling of the crisis continues to undermine confidence about the outlook.

UK economy walking from one crisis to another

The British economy cannot catch a break lately. First it was Brexit, then it was the trade war, and just as those uncertainties started to fade into the background somewhat, the COVID-19 outbreak has dealt the country its biggest test since at least the second world war.

Output in the services sector, which accounts for about 80% of UK GDP, fell at the fastest pace on record according to the PMI survey, with the index plunging to 34.5 in March. As awfully low as that figure is, it was still a good level above that of the Eurozone’s services PMI of 26.4 as UK plc was open for business for the first half of March. However, that comparative strength most likely vanished in April as Britain, like much of the rest of the world, has been under tight lockdown during the month, with devastating consequences for its services-orientated economy. 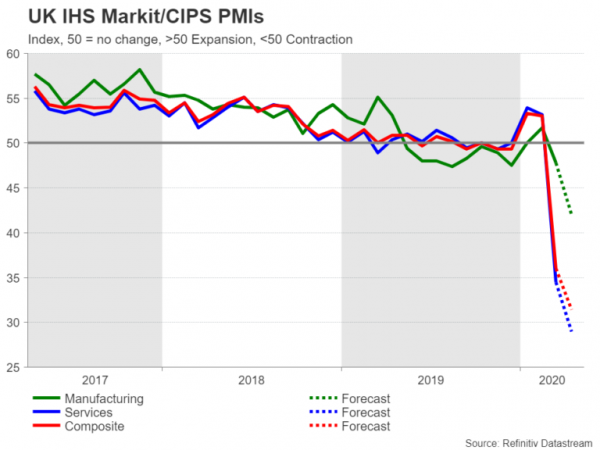 The services PMI is forecast to dive deeper into contractionary territory below 50 in April, falling to 29.0 in the flash reading. The manufacturing sector, which has not been as severely impacted from the stay-at-home rules as many factories that produce essential supplies like food and medicines remain open, is also projected to contract at a steeper pace. The flash manufacturing PMI is forecast to drop from 47.8 to 42.0 in April, while the composite PMI, which combines both the manufacturing and services gauges, is predicted to decline from 36.0 to 31.4.

The gloomy narrative is expected to be repeated on Friday with the March retail sales report. Although the retail sales data will pre-date the PMI numbers, it will still be an important indicator in assessing the scale of the hit to consumption from the shutdowns. Forecasts are for total retail sales to have tumbled by 4% month-on-month and by 4.7% on a yearly basis. If confirmed, that would make it the biggest monthly drop since records began. 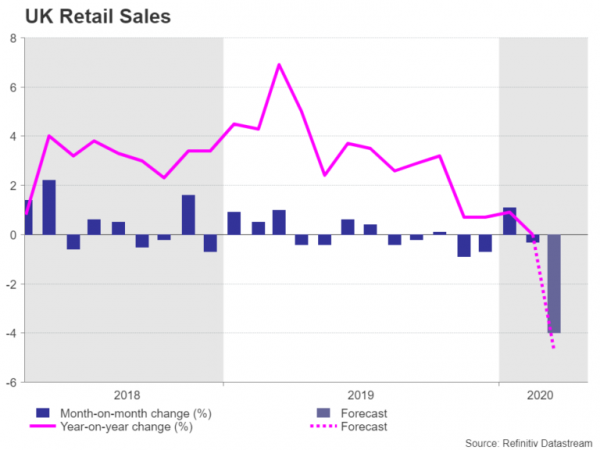 Data released by the British Retail Consortium last week points to a similar fall, with the surge in food sales driven by panic stockpiling unable to fully offset the wider slump in non-food items.

Over in the currency markets, renewed worries about the global economy and the UK government’s reluctance to end the lockdowns early after the Prime Minister’s own scare with the coronavirus have been weighing on sterling in the last few days.

If the flash PMI and retail sales figures add to the pessimism, the pound could be pushed back towards the $1.22 level. Failing that support as well would bring the 38.2% Fibonacci retracement of the March downtrend at $1.2090 into scope.

Conversely, if the numbers are not as dreadful as anticipated and furthermore, market sentiment starts to improve towards the end of the week, the pound could bounce back up to the $1.25 region where its 50-day moving average and the 61.8% Fibonacci level are situated.

In addition to the incoming data, pound traders will also be keeping an eye on how soon the number of new virus cases in the UK will begin to fall substantially over the coming weeks as this will help ministers decide when to lift some of the social distancing restrictions.