The Fed concludes its meeting at 18:00 GMT on Wednesday and having thrown everything including the kitchen sink to protect the US economy in the battle against the virus, no action is expected this time. As such, the market reaction may depend mainly on Chairman Powell’s remarks half an hour later. From a risk-management perspective, Powell has more incentive to soothe investors’ nerves and hint that more stimulus is possible, which could briefly hurt the dollar.

One can levy many criticisms at the Fed, but not doing enough during this crisis isn’t one of them. As the potential economic destruction from the virus became clear in March, the central bank acted decisively, unleashing a blizzard of stimulus measures to shield the US economy and prevent the financial system from freezing up.

For starters, it slashed interest rates back to zero, restarted and expanded its QE program to include unlimited purchases of US bonds, and established swap lines with foreign central banks to ease the upward pressure on the dollar. Then it went one step further, offering to buy so-called ‘junk bonds’ of companies that were recently downgraded below investment grade.

That unprecedented move showed the Fed really ‘means business’ as it is now taking on credit risk too, meaning it could suffer losses if those bonds are marked down, something unfathomable just a few weeks ago. On the bright side, this likely prevented a wave of defaults in corporate debt that, in turn, could have infected the real economy.

Having fired the big guns already, nothing much is expected this week. The focus will probably fall on Chairman Powell’s remarks during the press conference and the updated forecasts for the US economy, which will reveal how deep a recession the Fed expects. 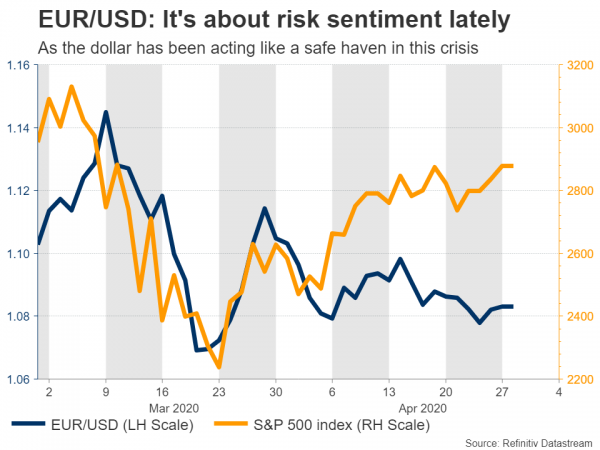 Traders will take those forecasts with a pinch of salt though, and even Powell might admit that there’s a high degree of uncertainty with any prediction right now as there are too many unknowns, and everything depends on when and how economies reopen.

Hence, investors will be hanging from Powell’s lips, eager to find out whether the central bank is willing to do even more if the crisis worsens, or whether policymakers feel they have done enough. For example, would the Fed consider going down the Bank of Japan’s path and introduce yield-curve control? How about buying stocks?

Overall, he is likely to maintain a very cautious tone, and probably keep even these extreme options on the table. Ruling out more stimulus now would risk increasing market volatility, which is the last thing the Fed wants as that could reduce the effectiveness of all its previous actions. Better being safe than sorry, especially in the middle of a recession.

In the FX arena, a dovish tone by Powell could hurt the dollar a little, while boosting stocks. However, it’s still unlikely that this will mark the beginning of sustained weakness for the reserve currency.

The Fed has already done almost everything in its power to weaken the dollar – actions not words – and yet the greenback remains stubbornly strong as there are few viable alternatives. The euro for example looks quite ugly as the Eurozone’s recession might be deeper and its recovery longer than America’s, given Europe’s underwhelming stimulus measures and its lack of a risk-sharing mechanism to help the most ravaged economies.

Moreover, the dollar has been trading like a safe haven lately, and in this respect, the risk of another move lower in stocks – that also drags euro/dollar lower – looks quite elevated. Current stock valuations imply a V-shaped economic recovery, which is probably overoptimistic when considering how many businesses will shut down permanently and how this crisis may impact consumer behavior long after the lockdowns end.

Looking at euro/dollar technically, if the bulls stay in charge and pierce above 1.0890, their next target might be the 1.0990 zone.

If the bears retake the wheel and push below 1.0815, the next obstacle to offer support might be the 1.0770 region.