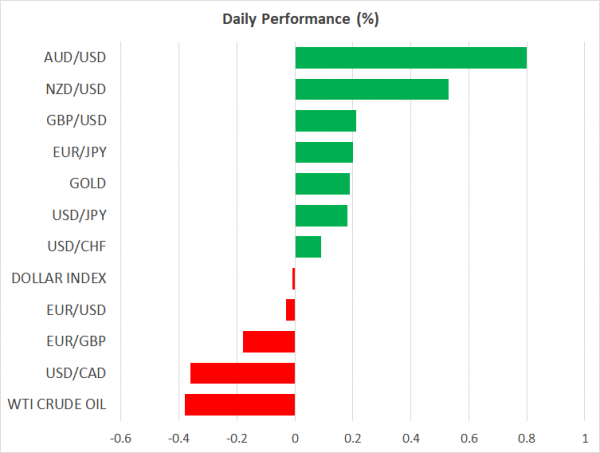 Stock markets have been partying like central bankers invented a virus vaccine in recent weeks, but some realism may be finally creeping back as dire economic data, boiling US-China tensions, and warnings about a looming wave of bankruptcies sober up investors. In America, the private sector lost 20.2 million jobs in April, while in the euro area, retail sales collapsed by the most on record in March and April will probably be much worse.

Individually these might not mean much. After all, everyone knows economic data will be a bloodbath for a while. But combined with an escalating war of words between Washington and Beijing, and the CEO of the world’s largest asset manager – Blackrock – warning of mass bankruptcies and cautious consumers, markets suddenly took notice.

The benchmark S&P 500 (-0.7%) gave up early gains to close in the red even though the tech-heavy Nasdaq Composite (+0.5%) managed to edge higher, powered by another rush into giant tech names that are considered more resilient in this crisis.

In the FX world, the defensive Japanese yen and the dollar outperformed, mostly to the detriment of the euro, which continues to suffer amid worries that the Eurozone’s lack of a common rescue plan could ignite another debt crisis in the periphery.

Yet we are seeing all these moves retrace a little on Thursday, as a batch of stronger-than-expected export data out of China overnight fueled hopes that the recovery may have already begun. Futures point to a higher open on Wall Street that would wipe out yesterday’s losses, the dollar and the yen are surrendering some of their gains, while commodity-linked currencies are marching higher.

But many risks remain on the horizon, calling into question the sustainability of this rally. First, the wheels are coming off the real economy in terms of unemployment, and the growing whispers about impending insolvencies are worrying. And while many economies are slowly re-opening, things won’t go back to ‘normal’ anytime soon as lingering social distancing rules may limit the operational capacity of many businesses (think restaurants), and consumers themselves might be more defensive for some time.

Most worrisome, if one excludes New York from the US virus numbers, the situation in the rest of the country is still worsening even as most states gear up to re-open. That implies a serious risk of second waves of infection and perhaps future shutdowns. Finally, hostile US-China rhetoric points to de-globalization, and the prospect of more stimulus if anything goes wrong seems dim as Congress wants to ‘pause’ and the Fed has already done practically everything it can.

All told, stock markets seem divorced from economic reality right now, mainly thanks to enormous stimulus and a flood of liquidity, but it remains to be seen how much longer they can defy gravity. A lot of optimism is currently baked into the cake.

In the UK, the pound spiked higher today after the Bank of England held off from adding more stimulus. Yet, there’s still a challenging road ahead for the British currency, as there’s no end in sight to the UK’s lockdown and Brexit rhetoric is heating up again.

In Turkey, the lira collapsed to a new record low today, after a move yesterday to curb short selling by the local regulator backfired, accelerating the exodus. Investors worry about depleted FX reserves to defend the currency and high dollar-denominated debt.

As for today, all eyes will be on the US initial jobless claims, ahead of tomorrow’s NFP. 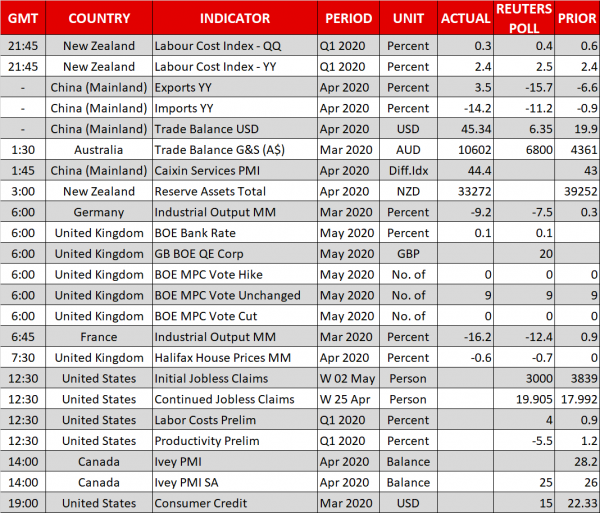