USD strengthened against a number of its counterparts yesterday, as the Fed’s Chair Powell dismissed the idea of negative interest rates for the bank as we mentioned yesterday. It was characteristic that the Fed’s chief stated “The committee’s view on negative rates really has not changed. This is not something that we are looking at,”. However, Powell also stroke a somber tone by noting that an extended period of weak growth may be in the cards for the US economy. Also, in his remarks Powell mentioned that additional fiscal support could be costly, but worth it if it helps avoid long-term economic damage. The US economy has been slowly restarting, yet the risk of a second wave of infections is still present and Dr. Fauci, the US top expert on the disease warned the US Senate that the disease will spread further if the country opens up too soon. President Trump dismissed the warning as not acceptable, implying that he sticks with his positions to reopen the US economy. The USD could be getting more safe haven inflows, yet traders may also be having an eye out for last week’s US initial jobless claims figure, due out today. As safe havens flows tended to favor the Japanese currency yesterday, USD/JPY dropped aiming for the 106.60 (S1) support line. As the pair seems to remain under the spell of a downward trendline incepted since the 11th of May we tend maintain a bearish outlook for the pair. Please note that the 106.60 (S1) provided substantial support for the pair from the 27th of April to the 4th of May. Should the pair’s long positions be favored by the market, we could see USD/JPY reversing course, breaking the prementioned downward trendline and aim if not break the 107.75 (R1) resistance line. If the pair remains under the selling interest of the market, we could see it breaking the 106.60 (S1) line and start aiming for the 105.30 (S2) support level.

The common currency weakened against the USD yesterday and during today’s Asian session despite ECB officials signaling that the Eurozone has hit the low point of its economic crisis caused by the Coronavirus infections. It should be noted that the current financial crisis has driven an even wider rift between the richer north and the poorer south of Europe and analysts tend to underscore that Italy’s government debt may be spiraling, while German economy may be protected by government’s fiscal strength. According to media, the EU is working on an ‘Ambitious’ plan for an economic recovery as EU Commission President Ursula Von der Leyen stated. The plan is for funding projects in line with European policy and may concentrate on digitalization, fighting climate change and von der Leyen also added that it will include grants and not only loans. EUR traders may also be focusing on the release of preliminary GDP rate for Q1, due out tomorrow. EUR/USD initially rallied and tested the 1.0890 (R2) resistance line yesterday, yet afterwards dropped, breaking the 1.0835 (S1) support line, now turned to resistance. We maintain the bearish bias for the pair as more adverse financial releases are expected. Should the bears retain control over the pair’s direction, we could see it breaking the 1.0775 (S1) support line and aim for lower grounds. Should the bulls take over, EUR/USD could break the 1.0835 (R1) resistance line and aim for higher grounds. 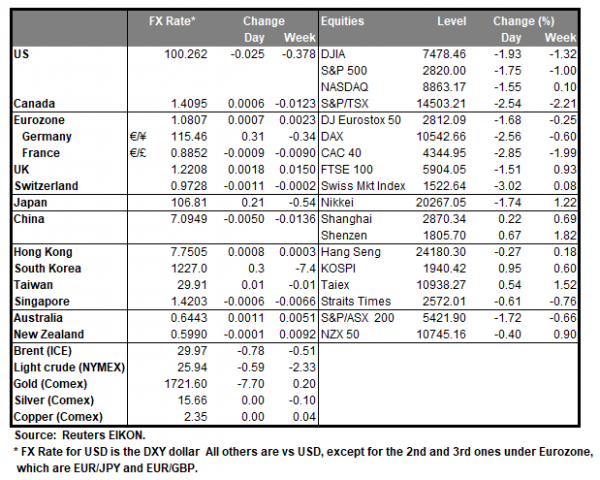 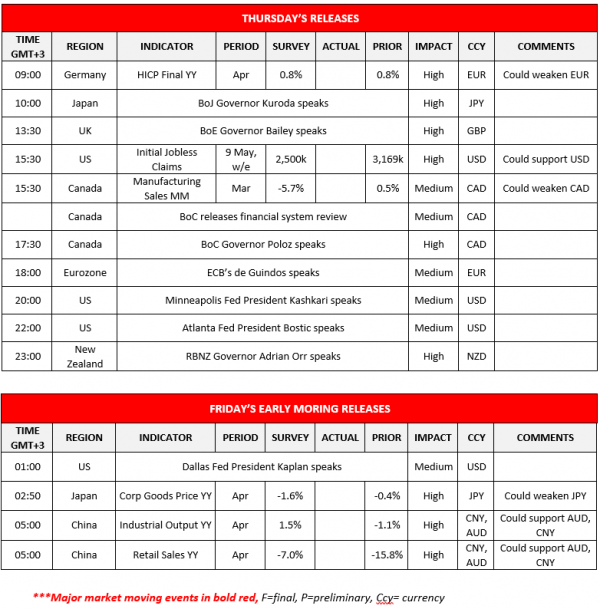