The pound strengthened against the USD and the JPY as better than expected financial data about the UK employment market were released for March. It should be noted though that the claimant count for April, reached record highs (865k), implying that the worst is still to come for the UK employment market. We tend to maintain our doubts about the recovery of the pound as fundamental issues tend to continue to weigh on the currency. Brexit remains a pressing issue, as officials from both the UK and the EU, say that little progress has been made in the negotiations. Also, the UK economic outlook may be darker than expected, as UK’s finance minister, Sunak, stated that he sees a recession in the U.K. on a scale ‘we have not seen’. At the same time, the specter of negative interest rates from the BoE continues to loom as the markets seem to price in such a scenario beginning 2021. Pound traders could turn their attention towards today’s UK financial releases, as well as BoE Governor Bailey’s speech before UK lawmakers later on. GBP/USD rose yesterday clearly breaking the 1.2200 (S1) resistance line, now turned to support. We tend to maintain our bias in favor of a sideways movement after cable broke the downward trendline incepted since the 8th of the month, late Monday, yet the bears may be just around the corner as the pair seems to be peaking. If the pair’s long positions are favored, cable could break the 1.2400 (R1) and aim for higher grounds. If the bears take over, we could see the pair breaking the 1.2200 (S1) line aiming for the 1.2015 (S2) level.

CAD strengthened reaching a three-week high against the USD yesterday, as hopes for a rise of oil prices, Canada’s main export product tended to fuel it. Oil prices remained rather steady yesterday yet hopes for a firmer demand for the commodity tend to support the notion that oil prices are about to rise. It should be noted that the CAD’s ascent was accompanied by an easing of lockdown measures in Ontario. Specifically, select retailers and auto dealerships in Ontario opened their doors to customers on Tuesday after two months of lockdown. Canada’s most populous province and economic engine is expected to reopen its economy in three stages, spurring hopes among CAD investors. We expect CAD traders to have their eyes turned to today’s release of April’s CPI rates, while may also pay attention to BoC’s Lane, due to speak later. USD/CAD continued to drop yesterday, testing our 1.3865 (S1) support line, yet corrected higher as it failed to break it. It should be noted that the 1.3865 (S1) support line, proves to be a quite strong support level, as it managed to contain the pair’s drop also on the 14th and 30th of April. Hence, we maintain our bias for a sideways movement as analyzed yesterday, between the 1.3970 (R1) and the 1.3865 (S1) lines. Should the bears take over, we could see the pair breaking the 1.3865 (S1) line and aim for the 1.3755 (S2) barrier. Should the bulls take over, we could see the pair breaking the 1.3970 (R1) line and aim for the 1.4050 (R2) level.

Today during the European session, we get UK’s inflation measures, as well as Eurozone’s final HICP rate, all for April. In the American session, we get Canada’s CPI rates for the same month, while we also get the EIA crude oil inventories figure for the past week. Also, we expect the market to turn its attention towards the release of the FOMC minutes of its last meeting in the late American session. The document is expected to be scrutinized by analysts for any clues of the bank’s future intentions, yet the week is allready packed with speeches of Fed officials, commenting on the latest developments. Hence the release is noted, yet if there is nothing shocking in it, may generate less interest than usually. As for speakers BoE Governor Andrew Bailey, Atlanta Fed President Bostic, St. Louis Fed President Bullard, BoC Deputy Governor Tim Lane are scheduled to speak today. During Thursday’s Asian session, we get Australia’s and Japan’s manufacturing PMI for May, as well as Japan’s trade data for April. 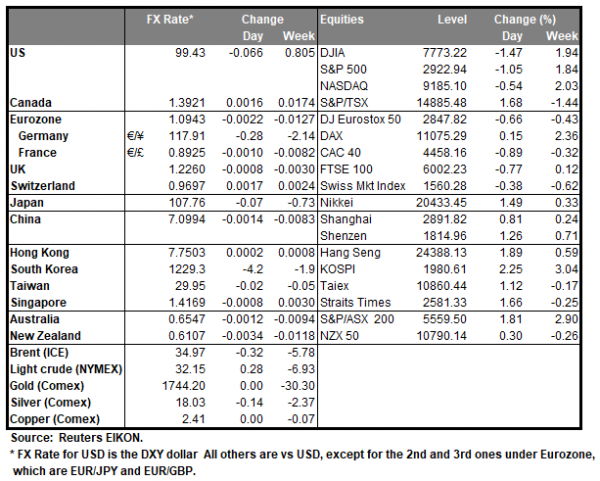 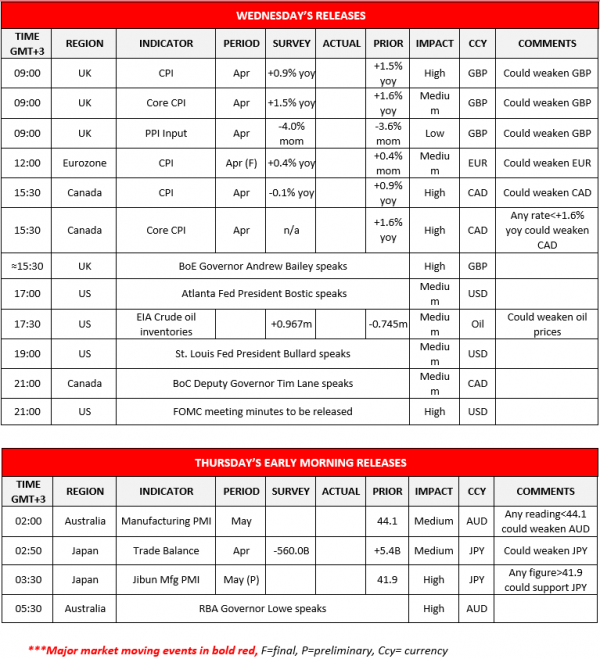