USD slipped as the market mood improved and hopes were further fueled, despite adverse forecasts and further tensions in the US-Sino relationships. Analysts note that the US-Sino relationships resemble a ticking bomb and should tensions escalate further we could see some safe-haven inflows for USD, while also a prolongment of the global economic slowdown. Trump’s tweets as well as the hardening rhetoric of Pompeo seem to be indicative of the US stance. We expect the situation to worsen as the pandemic may be serving as just a pretext for the US to impose harsher measures against China, in the antagonism between the two superpowers. The Fed’s minutes released yesterday showed that the Fed officials see the pandemic posing “an extraordinary amount of uncertainty” to the economy. We expect the USD to be influenced by today’s financial releases and the market may also lend an ear to Powell’s speech later today. EUR/USD rose yesterday clearly breaking the 1.0950 (S1) resistance line, now turned to support. The pair’s price action for the past three day, seems to be forming an upward trendline, yet today’s Asian session seems to be putting the trendline to the test. Should he pair’s price action clearly break the prementioned trendline we would switch our bullish outlook in favor of a sideways movement initially. However please note that today we have heavy financial releases relating to both sides of the pair. If the pair’s long positions are favored, EUR/USD could aim if not break the 1.1010 (R1) resistance line and aim for higher grounds. Should the pair come under the selling interest of the market, we could see the pair breaking the 1.0950 (S1) support line, aiming for the 1.0890 (S2) support level.

The GBP weakened against the USD yesterday, relenting any ground gained the day before, as lower than expected CPI rates tended to weigh on the pound. Analysts note that with inflation being substantially below the BoE’s 2% inflation target, it could be the case that negative rates discussions could pick up. BoE governor Bailey yesterday refused to rule out cutting interest rates below zero, in statements he made before UK lawmakers further fueling speculation. Also, we expect the dark economic outlook of the UK along with the increasing uncertainty of the Brexit negotiations also to weigh on the pound. Pound traders could be eyeing today’s UK financial releases, especially the preliminary PMIs, which offer a glimpse at May. GBP/USD dropped yesterday, testing our 1.2200 (S1) support line. Hence, we maintain our bias for a bearish movement as the pair failed to rise further or maintain a sideways movement proving yesterday’s suspicions that the bears are just around the corner correct. Should the bears maintain control over GBP/USD, we could see it breaking the 1.2200 (S1) support line and aim for the 1.2015 (S2) support barrier. Should the bulls take over, we could see cable bouncing on the 1.2200 (S1) line and aim if not break the 1.2400 (R1) line.

Today during the European session, we get France’s, Germany’s, Eurozone’s and UK’s preliminary PMIs for May. Also, during the European session, we get UK’s CBI trends (orders) for May. Late in the European session, we get from Turkey CBRT’s interest rate decision. In the American session, we get from the US the initial jobless claims figure for the past week, the Philly Fed business index for May, the preliminary Markit PMI’s for May, and the existing home sales figure for April. During Friday’s Asian session, Japan’s CPI rates are due out, while also please note that BoJ will be holding an extraordinary meeting. As for speakers please note New York Fed President Williams, Fed’s Vice Chair Clarida, BoC Governor Stefan Poloz, Fed’s Chairman Jerome Powell and Fed Board Governor Brainard. Especially we would like to underscore the speech BoC governor Poloz, who will be relenting his position on the 2nd of June, while also would like to see if Powell makes any comments about the necessity of additional fiscal stimulus to save the US economy. 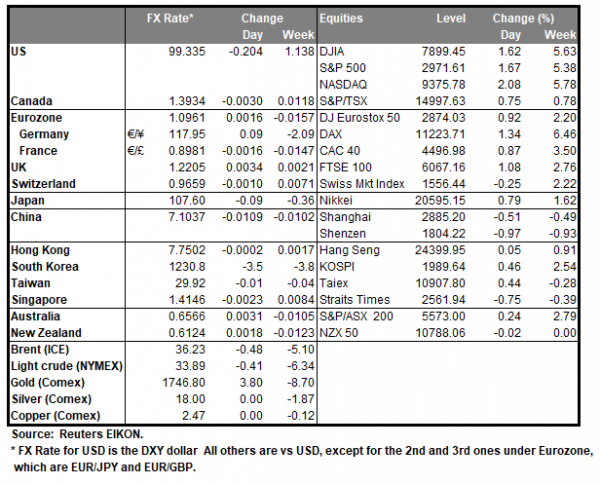 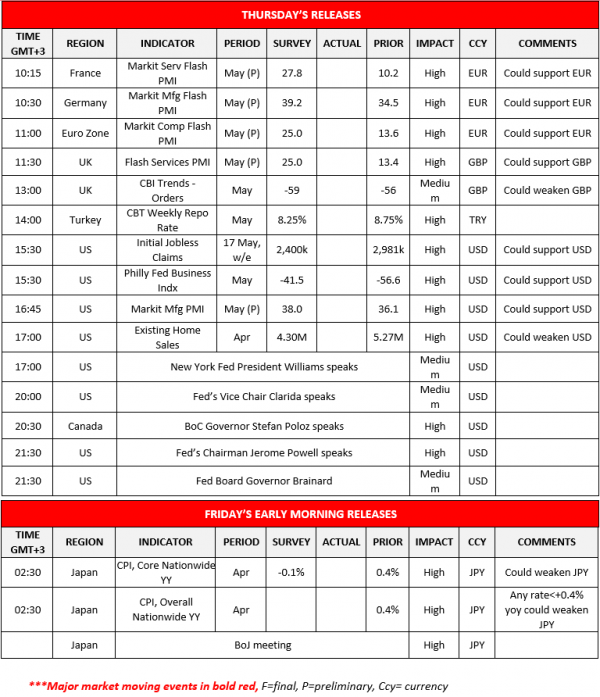