PEPP running out of envelope

The ECB’s main instrument in response to the COVID-19 crisis has been the Pandemic Emergency Purchase Programme (PEPP), which was announced on 18 March at a total envelope of EUR750bn by the end of the year. As widely expected, the ECB has frontloaded its purchases to contain volatility and financial fragmentation in certain euro area countries. However, the front-loading has continued for longer than expected, as the PEPP has also addressed the high issuance seen in recent weeks, where supply has exceeded purchases (see FI section). So far, the ECB has been buying EUR5.7bn per trading day on average, well above its EUR4bn per trading day average if the EUR750bn was spread equally over the year. That means that as of last Friday, the ECB had bought EUR211bn of the EUR750bn, in effect already having utilised 28% of the PEPP envelope while only 20% of the trading days of the initial PEPP period have lapsed. Extrapolating the current pace of purchase (while adjusting for the 30% slower August purchase rate, similar to other APP purchase patterns), we estimate the PEPP envelope will be exhausted by early October. In order for the ECB to avoid tightening financial conditions, revisiting the levels from mid- March, we expect the ECB to announce an additional PEPP envelope at next week’s meeting. 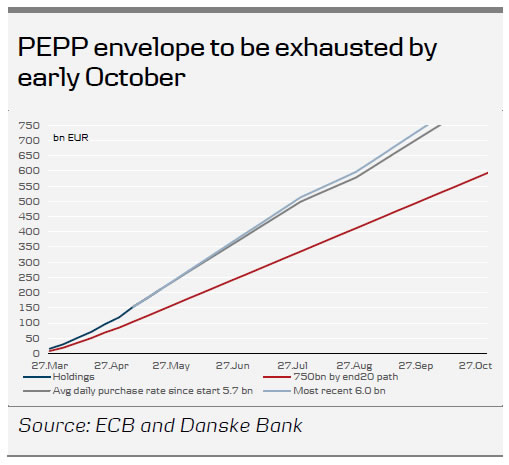 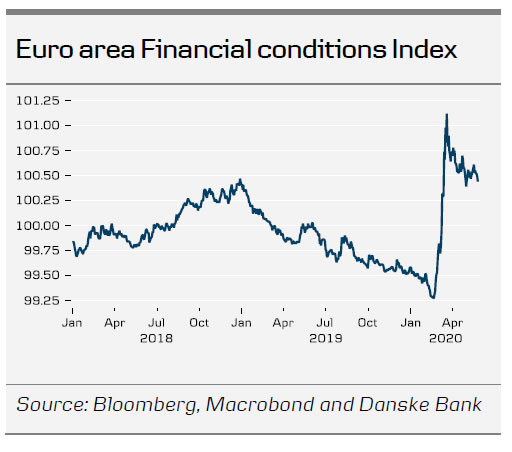 Naturally the size of the PEPP’s expansion is uncertain. However, updating our model using the elasticities as discussed ahead of the September meeting, see ECB Research – Enough talking, now is the time for action, 6 September 2019, with the current projected inflation gap of 0.34% to the 2% target, yields a mechanical upscaling of EUR465bn. Therefore, we believe we can expect an additional EUR500bn, which supports the increased issuance in the coming months, see FI section below for discussion of supply outscaling current ECB purchases. Furthermore, we believe EUR500bn is in the ballpark of what is needed and will suit the ECB narrative of heightening alertness and readiness to act, while at the same time not committing to a similar magnitude as the initial EUR750bn.

We believe EUR500bn for now will avoid risk of financial fragmentation at this stage. We expect the additional EUR500bn to be accompanied by a longer implementation period. While noting that the ECB has used September 2021 as a ‘crisis date’, as the temporary collateral easing and new liquidity measures (PELTROs) expire then, we believe that the daily/month purchase rate would be too low at the proposed EUR500bn, hence we expect June 2021.

As flexibility in the PEPP is crucial, we expect the ECB to formulate the expansion as an overall PEPP envelope of EUR1,250bn until June 2021, without committing to monthly purchase rates. This keeps the daily purchase average just below EUR4bn, somewhat lower than the EUR5.7bn currently. We do not expect an announcement on the PEPP reinvestments nor any communication of forceful or structural deviation from the capital key.

We expect the current APP (which is dwarfed by the PEPP) will be extended at the current EUR20bn/month pace into September 2021. We do not expect the ECB to address the German constitutional court ruling on PSPP in any way other than it has already done, i.e. taking note of the case, while highlighting this is a domestic German matter, albeit also standing ready to support the Bundesbank in a constructive way.

In recent weeks there has been market speculation about including junk/high-yield bonds into PEPP, ‘fallen angels’ similar to what the Fed has implemented, but we do not expect the ECB to take additional measures at this stage. We expect the ECB to signal a readiness to include the products, should they be needed. We already saw the first step to include fallen angels, when the ECB introduced its temporary collateral framework of grandfathering the rating on the 7 April rating in case of downgrade. We could see similar action, most notably among sovereigns if needed, though we don’t believe it is at this stage.

Markets continue to price in a rate cut by the ECB. At the time of writing, markets are pricing 7bp of rate cut at the trough in summer next year. We have long been arguing that the ECB will not cut its official rate (deposit rate at -50bp) and the recent pseudo rate cut on the TLTRO3 (see April Flash comment – No PEPP increase, no rate cut but then again, 30 April 20), has confirmed this view. Therefore, we recommend buying the 1y6m EONIA at -53.2bp with a target of -47bn and stop loss at -58bp. Usually, we would see this trade as having moderate risk reward, however given the uncertainty further out the curve over issuance/supply vs. ECB (APP and PEPP) demand dynamics prevailing, we find this to be good way to protect against eventual adverse moves in rates. 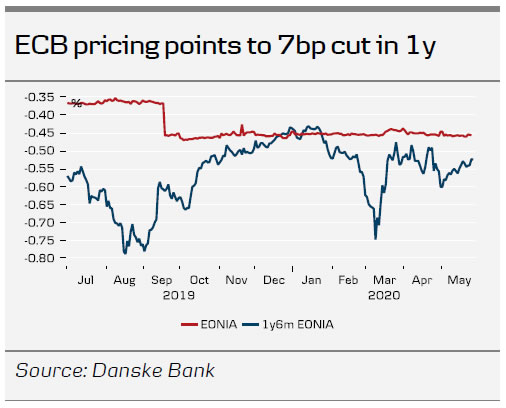 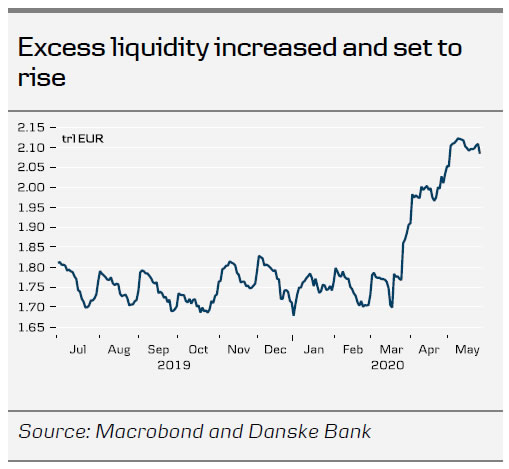 In the last week we have had several ECB GC members conducting interviews or giving speeches. Notably the French governor, Villeroy, said on Monday that ‘we will very probably need to go even further’, while favouring the PEPP over other measures. A similar assessment has come from President Lagarde and board member Schnabel. Schnabel said that if it is judged that more is needed, the ECB is ready to expand ‘any of its tools in order to achieve its price stability objective. With respect to the PEPP, this concerns the size but also the composition and the duration of the programme. We are ready to react to new data coming in.’ We expect a sizable revision of existing staff projections, see later paragraph with Lagarde’s comments as well.

At the April meeting, President Lagarde acknowledged that the euro area is facing a recession of unprecedented scale and speed, including a profound deterioration in labour market conditions. The ‘great lockdown recession’ is already the deepest recession ever recorded for the euro area, with a decline in GDP of -3.8% q/q in Q1 with worse still to come in Q2 in our view. ECB staff scenarios released in May pointed to a GDP contraction of between -5% and -12% this year, however in the ECB’s minutes from the April meeting it noted that the ‘mild’ scenario of -5% was outdated. On Wednesday President Lagarde said 2020 GDP may be between the moderate and severe scenario (-8% to -12% y/y). We expect the ECB’s 2020 baseline forecast to lie around -9%, noting that the ECB will point to elevated uncertainty in the GDP estimate. While the contraction has been severe, some rays of light in high frequency data have emerged after European countries came out of their lockdowns, leaving room for a rebound in the economy in H2 20 (see Euro Area Research – The road to recovery). Still, it will take some time before pre-crisis GDP levels are reached again, giving the ECB a strong argument to extend the duration of its stimulus via the PEPP programme. 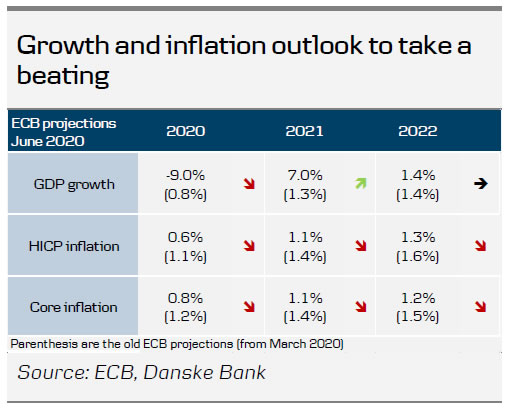 The negative impact on the euro area inflation outlook has been more muted so far, thanks to a surge in food prices and an upward bias for core inflation, resulting from imputations of services prices. Although the medium-term implications of the coronavirus pandemic for inflation are uncertain due to opposing supply and demand shock effects, disinflationary forces will likely accumulate as the crisis progresses. Hence, we look for a sharp downward revision of the HICP forecasts, not least due to a stronger effective euro and lower oil prices feeding into the forecast, which again should give the ECB ample evidence to scale up its PEPP programme. That said, we expect the ECB’s medium-term inflation profile to remain upward sloping, reflecting the belief that pro-inflationary forces from supply chain disruptions and improving labour market conditions will at some stage come to the fore. 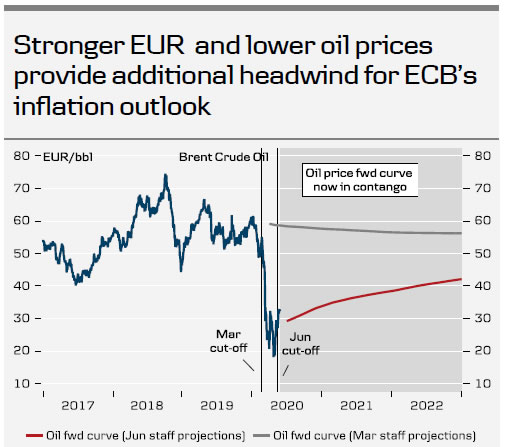 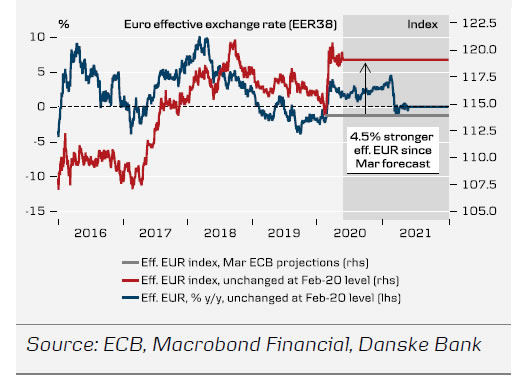 We expect the current carry friendly risk-on environment to continue if the ECB delivers on our expectations. The increased supply in coming months is currently projected to exceed purchases. With the recovery fund, Next Generation EU, see Flash comment – Next Generation EU: a landmark for European history? 27 May 2020, we remain constructive on spreads. Should the ECB, against our expectation, not deliver on the PEPP envelope next week, we are in for a volatile period, albeit we do not expect a return of the BTP-Bund spreads of around 320bn that we saw in March.

We recommend being long the 10y Bund ASW at 32.5bp, with a target of 48bp and a stop loss at 24. We expect the current tightening to levels not seen since the start of QE to reverse with increased PEPP and less swapped issuance. Our fair value Bund ASW model currently points to Bund ASW at 48bp. 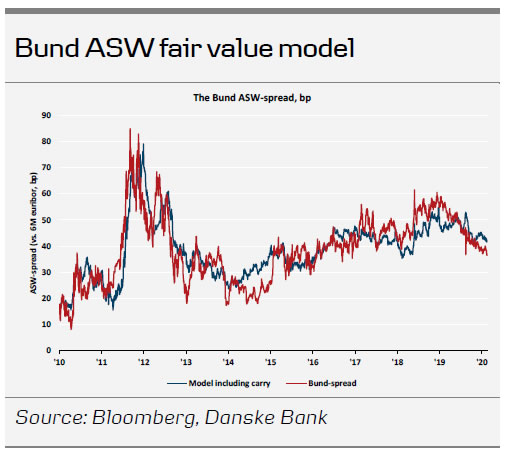 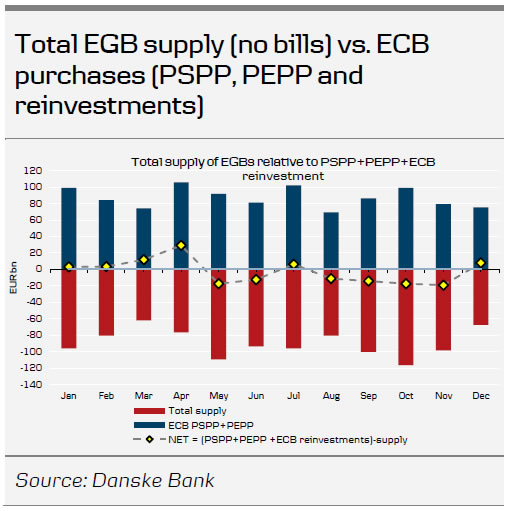 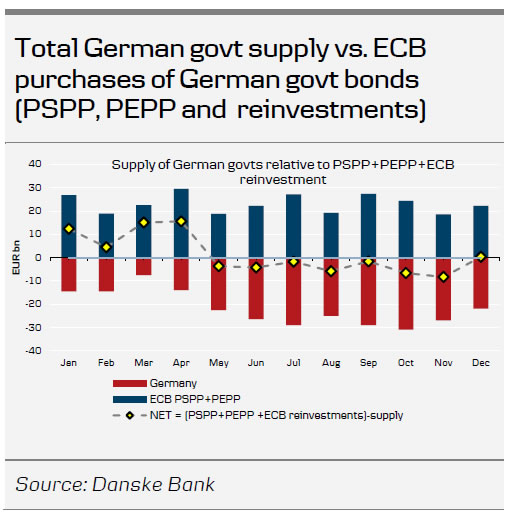 In line with our expectation, EUR/USD has seen an upward pull over the last month and we think ECB action may provide another small leg higher in spot. Thus, short term, we think that spot will be in the 1.10-1.11 range.

The renewed EUR optimism has been driven by increased confidence in the global economy, but also by EU institutions starting to agree that an accommodative stance is indeed needed, especially in terms of fiscal policy. We believe the ECB will step up and add further accommodation, which will likely be viewed as a further removal of European macro tail risk. In turn, we see scope for EUR/USD to remain above 1.10. Looking ahead, Brexit and trade talks are likely to limit optimism in the spot and we generally still think that the USD will remain strong in the months to come.