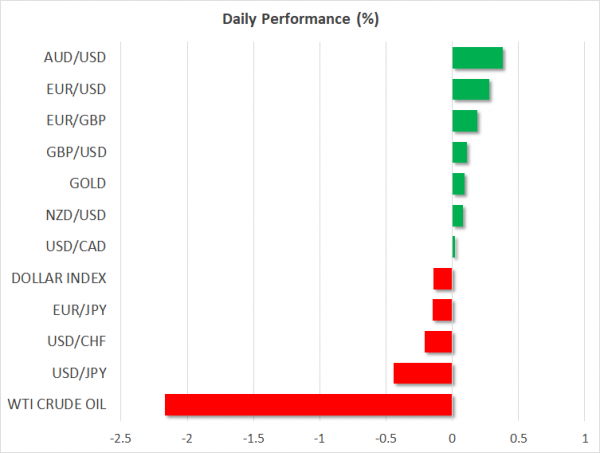 Markets are bracing themselves for US President Trump’s press conference expected later today for his decision on what actions to take against China over Hong Kong. The Chinese parliament yesterday passed the controversial national security bill, which is seen as eroding Hong Kong’s autonomy from China.

US Secretary of State Mike Pompeo has already warned that the legislation would endanger Hong Kong’s special status with America and speculation is running rife about Trump’s options on punishing China. A tough US response would risk escalating tensions at a time when the two countries are struggling to preserve a fragile trade truce and the White House is accusing Beijing of a cover up over the outbreak of the coronavirus.

The cautious mood led most Asian indices to close in negative territory on the last trading day of May, and US and European stock futures were also in the red. But stocks still get to end the month with strong gains as hopes of economic recovery from the pandemic continue to underpin risk assets.

Moreover, the limited sell-off suggests investors are not anticipating Trump to announce anything too harsh such as completely ridding Hong Kong of the special privileges it enjoys with the US. Instead, the most likely outcome is sanctions on Chinese officials and businesses that would involve visa restrictions and freezing their assets.

Doubts about how punitive Trump’s actions will be sparked only a muted reaction among safe havens, with the Japanese yen being the main beneficiary of safety flows. The yen was up almost 0.5% versus the US dollar, which slid to 2½-month lows against a basket of currencies on Friday. The Swiss franc was also mixed while gold was marginally firmer.

The dollar’s weakness was broad based, falling even against the pound and the Australian dollar amid the fading risk appetite as the US currency came under pressure from fresh speculation that the Federal Reserve’s next crisis move will be to implement yield curve control. New York Fed President John Williams told Bloomberg Television on Thursday that the Fed is “thinking very hard” about targeting parts of the yield curve.

Treasury yields were lower across the curve on Friday, weighing on the greenback and accentuating the euro’s advances. The single currency is on track for a fourth straight day of gains as it tests the $1.11 level for the first time since the end of March. The EU’s announcement this week of a €750 billion virus recovery fund has helped turn around sentiment for the Eurozone economy and the euro’s latest upswing is a reflection of the brightening outlook, which is being supported by the easing of the lockdown rules across the continent.

Powell and US data pose further risks for dollar

Fed Chair Jerome Powell, who is due to participate in a panel discussion at 15:00 GMT, could drop further hints of policymakers actively considering yield curve control, possibly pressuring the dollar even more. Another danger will be the personal income and spending numbers out of the US at 15:30, which are expected to show a record monthly drop in consumption in April.

The Canadian dollar will also be in focus as Canada will publish first quarter GDP growth figures. A worse-than-expected reading would threaten to derail the loonie’s recent leg up versus the US dollar.

However, the data may not matter if Trump surprises with a much tougher response on China as markets appear to be underpricing the risk of a major flare-up in US-China tensions. 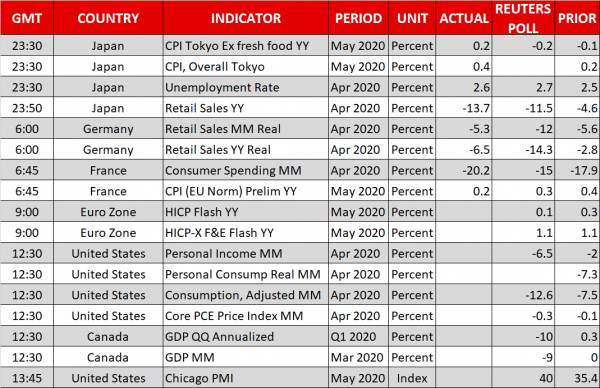