The CBR kept its key rate unchanged at 9.00% on 28 July. Bloomberg consensus has shifted towards ‘unchanged’ over the past two weeks, while we continued to be in the minority expecting a 25bp cut. However, in CBR Rate Decision Preview: We pencil in a cautious cut, 24 July, we did not exclude the central bank becoming overcautious and keeping rates on hold.

Reading the CBR’s latest statement on the decision, its tone is not convincing enough on why it left rates unchanged. As the CBR had reiterated that the recent rise in inflation and its effects are seasonal and temporary, we link today’s decision primarily to the risk of a further deterioration in the geopolitical environment surrounding Russia, including the recent approval by both houses of the US Parliament of a new heavily anti-Russia bill, Germany calling for new anti-Russia sanctions on the recent delivery of turbines to Crimea and today’s tit-for-tat response by Russia’s Ministry of Foreign Affairs.

‘Inflation remains close to the target’. Annual inflation increased to 4.4% y/y in June, up from 4.1% y/y in May, on an increase in fruit and vegetable prices. Yet, we do not find convincing the inflation argument for keeping rates unchanged, as the CBR said it sees no material risks from prices that are up on seasonal factors, causing a halt in the decline in inflation expectations.

‘Interest rates on loans have declined but their level supports moderate demand for borrowing’. We conclude this is another assumption that supports more dovish monetary policy than today’s rate decision.

‘The economic activity is rebounding’. This factor gives the CBR room for its caution, as Russia’s economy continues to surprise positively despite moderately tight monetary policy.

Elevated geopolitical risks and exchange rate dynamics ‘may have negative implications for inflation expectations’. In our view, this is the most important point behind today’s decision, even if the CBR lists it far below other reasons in its statement.

We expect the CBR to cut the key rate by 25bp at its monetary policy meeting on 15 September 2017, while sudden geopolitical deterioration and an oil price fall are major risks for our dovish call. Given the slight change in the CBR’s easing path, we raise our key rate projection for the end of 2017 to 8.25%, from 8.00% previously.

We do not believe the slowdown in the monetary easing path is affecting Russian economic growth in H2 17. Russia’s GDP growth accelerated from 0.5% y/y in Q1 17 to 2.7% y/y in Q2 17, according to Russia’s economy minister Maxim Oreshkin. In H1 17, GDP growth climbed to 1.6% y/y and the minister said the current trend implies upside risk to the ministry’s current estimate of 2% y/y for 2017. This is a very preliminary estimate, which we expect Russia’s statistic service Rosstat to revise many times.

The Ministry for Economic Development (Minecon’s) recent statement sounds positively surprising to us. Yet, there are reasons behind the statement: the average crude price was 8% higher in Q2 17 than in Q2 16, industrial production growth has been steady due to changes in economic structures, rates have been falling on lower inflation and private consumers saw a recovery.

The RUB reacted positively to the CBR’s decision despite the consensus view on the rate, as yesterday we saw market pricing starting to lean towards a possible cut in weekly inflation, falling to zero, and crude price rising. We keep our moderately bullish stance on the RUB in the long term, supported by carry and rising oil price, expecting the USD/RUB to hit 57.10 in 6M and 55.00 in 12M.

Given the change in the CBR’s path, Russia’s local debt – OFZs – reacted slightly negatively to the decision. Yet, we expect a recovery as dovish surprises from the CBR are still possible in the autumn. However, OFZ demand may stall if new anti-Russia sanctions are signed by President Trump in coming weeks. 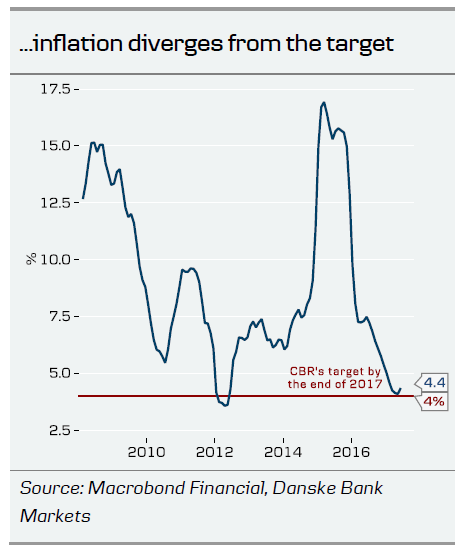 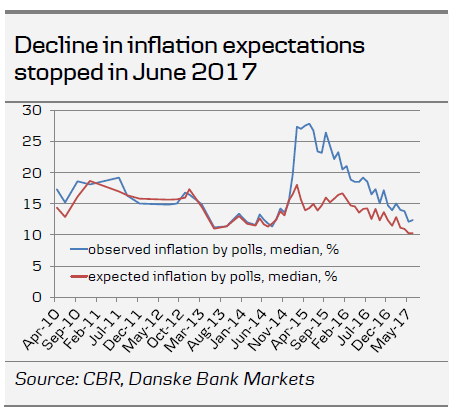