The Bank of Canada’s Q2 editions of the Business Outlook Survey and Canadian Survey of Consumer Expectations both reiterated that the economic recovery from an unprecedented economic pullback over March and April will take time.

Business expectations for future sales and investment both pulled back dramatically over the survey period (mid-May to early-June) to levels that rivaled the low points of the 2008/09 recession. That is not at all surprising given the scale of the economic downturn in March and April. The Q2 survey was conducted after the easing in virus containment measures had already begun in most regions. And there were corresponding green-shoots in business expectations. Employment growth is still expected to be positive over the next year – although significantly less-so than in early quarters. About 40% expected sales to be at to pre-shock sales levels by next year and another 15% expected sales to “mostly recover” by that time.

Still that leaves almost half of businesses expecting at best a partial recovery. Unsurprisingly, a lot of the more pessimistic businesses are in the services-sector, and particularly tourism-dependent industries that will probably see virus containment measures last longer, as well as energy companies. Concerns were not so much on businesses’ ability to produce (most reported they could return to pre-shock production levels within a month once restrictions are lifted), but more that demand will be weak even as social/physical distancing measures are relaxed. That expected demand shortfall has businesses contemplating output price cuts, and business inflation expectations slowed. Credit conditions tightened somewhat but the Bank of Canada noted that measures taken by the central bank to ease that stress are working.

The consumer expectations survey mirrored a lot of what businesses are saying. Consumers reported being more concerned about losing their job, and less confident about finding another position if that were to happen. Spending expectations fell, with the largest pullbacks expected in travel and transportation and entertainment activities – a lot of which simply weren’t available for purchase over the survey period. Still overall spending was still expected to grow – as was household income. Spending on essentials generally increased (health and personal care, shelter, and groceries) and households report shopping less frequently and more online or curb-side pickup. Unlike businesses, households expect inflation to rise going forward, potentially reflecting recent divergence in prices for food (which is taking up a larger share of household expenditures and have increased more quickly) versus other products.

Early economic data for May and June still looks less-bad than expected even a month or two ago when the BoC was surveying businesses and households. But the hole the economy dug in March and April was also unprecedented. We continue to expect a partial bounce-back in economic activity in the third quarter – provided virus spread remains contained in Canada. But that will still leave the level of activity well-below pre-shock levels at the end of this year, and remaining under-performance is unlikely to be fully unwound at least until there is a vaccine or more effective treatment widely available. 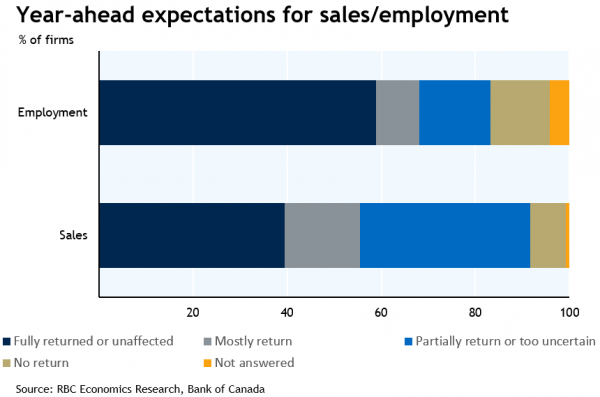