While the world is nervous about the Covid-19 second wave, the British pound has another reason to worry about its recovery: the Brexit saga. Six months after its departure from the European Union, the UK has just started to negotiate the terms of a trade deal with the bloc. And while the blame for the slow progress could be largely placed on the social distancing orders, the latest unfruitful round of talks suggests that solidifying an agreement is extremely difficult despite the virus situation. Expectations are for the sides to finally find common ground this year, though the tight deadline signals that the resulting agreement may not be ideal, leaving little time for adjustments and plenty of space for a pound depreciation.Taking a breather as re-opening continues

More Brits were out on the streets during the past weekend as bars, cafés, restaurants and hotels reopened to welcome clients for the first time since the lockdown began in March. The actual capacity of services will be lower, but something is better than nothing for the economy, especially if the government and the central bank provide the feeling of safety by pledging to further subsidize businesses and boost rehiring line in other developed countries. Hence, the pound is reasonably pushing on to extend the sharp rebound it staged in late March.

In economic terms, the country shrank by the most since the 2008/2009 financial crisis in the first three months of the year, but since then the data have shown improvement, hinting that the contraction may have immediately found a bottom under the ultra-accommodative policies.

Perhaps, further relaxation of restrictions this month may result in better data outcomes and raise interest in the pound. Still, this should not be taken for granted given the resurgence of virus cases and the resumption of lockdown measures in some key US states and other regions. 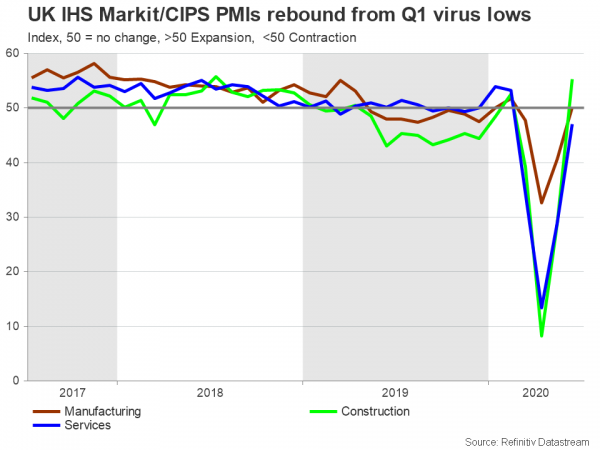 Brexit trade talks have a bad start, but it is ok

Leaving Covid-19 aside, the Brexit story is another weight on the pound and probably the main reason why the currency, unlike the euro, has extra room to run to recoup its virus losses. The EU and the UK promised to intensify trade talks this month after the British Prime Minister refused to extend the December deadline. However, the first in-person round of discussions last week led nowhere, with officials terminating the meeting a day earlier as differences remained wide. Boris Johnson further toughened his language this week, reporting to the German Chancellor that he is ready to leave the EU on ‘Australia terms’ if a future trading deal is not achievable.

Well, this is a story we’ve heard before, and Johnson’s stance could be considered strategic to pressure the EU for his demands, so the pound is not very sensitive to Brexit headlines yet. Still, six months may not be enough time to solve the serious sticking points and prepare businesses for all scenarios, likely keeping the bears in play for longer. Note that firms may need an early call before the third quarter ends to close out their positions and make alternative arrangements in the UK and EU stock exchange centers.  Failure to do so, or a late warning, could harm their financial stability.

What are the sticking points?

Currently, the UK has full access to the bloc and follows EU rules during the transition period that expires in December. Without an accord, UK firms may face high quotas and tariffs on the first day of 2021 if the sides adopt the default World Trade Organization concept. While Johnson did not exclude that case, he is probably not in favour of it either. A free trade deal is what both sides are aiming for, but the UK wants to create its own subsidy system that is not bounded by EU legislation. On the other hand, the EU wants British exporters to remain in line with environmental, employment and subsidy policies to protect its competitiveness and to maintain a level playing field.

Another issue is access to the UK’s fishing waters which the EU desires to achieve in exchange for allowing the Brits to sell fish in EU markets. Fishery accounts for only a tiny portion of both economies, so the area may have a more strategic role, allowing EU vessels to have less expensive access to nearby economies. National security could also be a matter of concern here.

Compliance on a potential future agreement is a challenging topic as well. The UK proposed to notify the bloc about how its practices are functioning every two years and accept any punishment if something is not right, with an EU official saying, “that’s never going to fly”. Whether the new process of custom checks policed by a new IT platform will be ready and tested before January 1 is in doubt too, making it unclear how goods will be moving between the economies.

Is a trade deal possible this year?

The basic scenario is that an agreement could finally be reached but the battle may not be an easy one given the above headwinds. With no clue as to how the virus situation may develop and how much additional stimulus may be needed if an effective vaccine is not ready soon, a no-deal Brexit at the end of the year could be an extra burden that no side wants to face. Still, Johnson, unlike the former Prime Minister, Theresa May, managed to create a more united inner cycle, which backs his views. Hence, he may have the support he needs to pressure the EU until the last minute in order to secure his demands. Simultaneously, this also increases the chances of a bad deal as the national parliaments will have little time to vote for the plan.

Where now for the pound?

Turning to the pound, it had a green start to the month mainly because of the dollar weakness, with the price stubbornly pushing for more improvement above the 1.2500 hurdle recently. From a technical perspective, the bulls could chase more gains in the short-term according to the strengthening RSI and MACD in the daily chart, bringing the 200-day simple moving average (SMA) and the 1.2750 resistance region next under the spotlight. Running higher, the price may attempt to breach the 1.2970 barrier. Yet, whether cable can pierce above its pre-virus ceiling of 1.3200 is still an open question and may not happen unless Brexit talks make surprising progress and/or the Bank of England or the government release more liquidity. Recall that the British chancellor Rishi Sunak announced a kickstart scheme of thirty billion pounds on Wednesday to save jobs and pledged to do more to mitigate the unemployment crisis.

To the downside, a break below the shorter-term SMAs could stall near the 1.2250 support area, while a decisive close below 1.2074 would ruin market’s positive pattern that started from a 35-year low of 1.1404.