Canada GDP rebounded a modest 4.5% in May alongside easing virus containment measures after dropping 18% over the prior two months. Activity was still 15% below February levels in May. The initial recovery was led by goods sector industries and retail trade, with construction output growing 17.6% month over month, manufacturing output up 7.4% and retail up 16.6%. Public sector industries also increased. Education and health care grew 6.7% and 3.3%, respectively in May. Real-estate broker commissions increased alongside the initial bounce-back in housing markets. Accommodation and food services grew 24.2% after falling almost 70% in March and April, yet arts, entertainment, recreation declined another 2.9%. We expect some of the services industries to continue to lag the recovery as demand will be slow to rise due to remaining safety protocols and concerns about virus spread. Oil production remained sluggish in May, down another 2.7% from April and drilling activity has yet to show signs of a significant rebound into the summer.

Still the economy continued to grow in June. Statistics Canada provided a preliminary estimate that GDP grew another 5% in that month, consistent with preliminary estimates that both manufacturing and retail sales grew more quickly in June than May, and a pick-up in June employment. Auto production also picked up substantially, already up to almost 90% of year-ago levels in June from just a quarter in the month prior. Adding to the list, domestic air travel recovered to almost 80% of its pre-COVID peak by early July, though international air travel remained suppressed. The actual GDP estimate for May slightly outperformed preliminary estimates, and we see risks tilted slightly to the upside on the June preliminary estimate as well.

Overall, the initial recovery through May and June appears to have been stronger than was once feared, though not enough to reverse the decline in April. Statcan’s preliminary estimate is that Q2 GDP declined around 40%, slightly less-bad than the BoC’s central scenario (-43% annualized), and still close to the top of the range of possible in their April scenarios. However, much of that initial bounce-back came from an easing in virus containment measures that pushed activity to exceptionally low levels in April – along with unprecedented household income supports that probably more-than-offset COVID-related household income losses in Q2. Further marginal gains will be harder to come by in the months to follow. And, absent a vaccine of more effective treatments, the threat of resurgence in virus spread will keep some containment measures in place – and spending (on services in particular,) subdued. We continue to expect economic activity will still be running well-below year ago levels at the end of 2020. 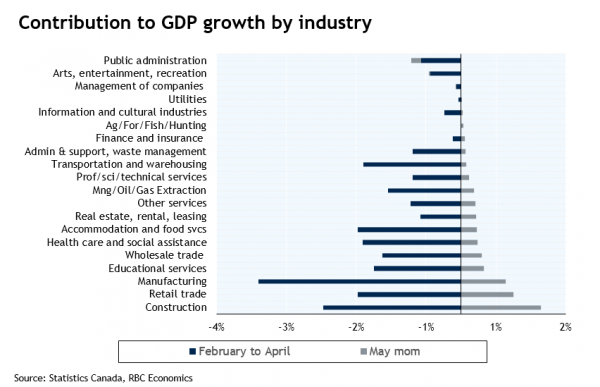 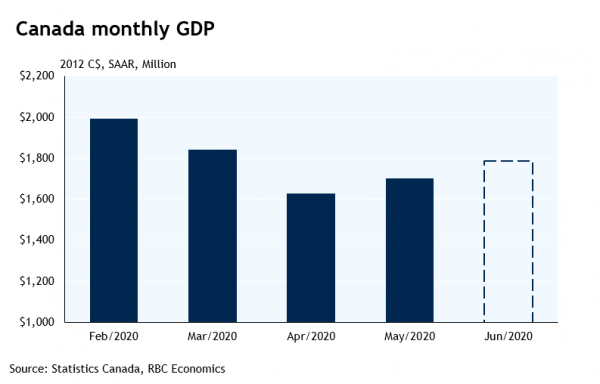 Loonie Trading On A Weaker Footing This Morning