The USD weakened against most of its counterparts yesterday, as investor’s worries for the recovery of the US economy intensified. Yesterday’s financial releases were characteristic as despite the non-manufacturing ISM PMI for July rising and reaching pro Coronavirus levels, the hirings on the sector dropped while the ADP national employment figure showed a sharp decline. As market worries for the US employment market intensify after the prementioned releases the US Congress seems still unable to strike a deal for the next fiscal stimulus and given that the unemployment benefits have expired and 30 million Americans are on jobless benefits, the situation becomes critical. It should be noted that White House officials stated that should the US Congress not find a solution, the US President would intervene. Today’s employment data could affect USD’s direction, yet markets may allready be eyeing the release of the US employment report for July, due out tomorrow.

USD/CAD dropped further yesterday aiming for the 1.3200 (S1) support lien as the USD continued to weaken, while the Loonie may have gotten a bit of support from a rise in oil prices. We tend to retain a bearish outlook for the pair, yet some stabilisation seems to be in play for pair at the current stage. Please note that the CAD seems to have regained the ground lost during the pandemic and is currently at the same level it was near the end of February. Should the bears actually retain control over the pair, we could see the pair breaking the 1.3200 (S1) support line and aim for the 1.3105 (S2) support level. Should the bulls take over, we could see the pair breaking the 1.3320 (R1) resistance line and aim for the 1.3425 (S2) resistance barrier.

Today early in the early European session (06:00,GMT), we get BoE’s interest rate decision and the bank is widely expected to remain on hold at +0.10%. Currently GBP OIS imply a probability of 97.81% for such a scenario and should the bank do so, we could see the market’s attention turning to the accompanying statement, any forecasts of the bank, as well as Governor Andrew Bailey’s press conference later on (11:30,GMT). Despite the bank allready having announced an increase in its asset purchases of £100 billion, at the current meeting we expect the bank to maintain its assets purchases target unchanged at £745 billion and postpone any expansion for a later stage. BoE could refrain from past statements that the economy could recover by the second half of 2021 and warn for a longer recovery period. However, it should be noted that initial signs seem to be rather promising, given the release of July’s PMIs and the retail sales growth rates for June. Also analysts will be focusing on the possibility for the bank to employ negative interest rates, a scenario not refuted in the past by BoE officials. Overall, we tend to see risks related to the event as tilted to the bearish side for the pound, unless the BoE decides that the recession is shallower than originally expected.

GBP/USD rose somewhat remaining near the 1.3150 (R1) resistance line. We tend to retain our bullish outlook as the USD weakness seems poised to continue. Should the pair find fresh buying orders along its path, cable could break the 1.3150 (R1) resistance line and aim for the 1.3210 (R2) level. Should a selling interest be displayed, we could see the GBP/USD breaking the 1.3085 (S1) support line and aim for the 1.3015 (S2) level.

Today in the European session, we get Germany’s industrial orders growth rate for June and from the UK, besides the BoE interest rate decision, the construction sector’s PMI for July. Also as the American session is about to start, we get from the Czech republic CNB’s interest rate decision and the US initial jobless claims figure for the past week. Also note that Dallas Fed President Kaplan and RBA Assistant Governor Ellies are scheduled to speak. 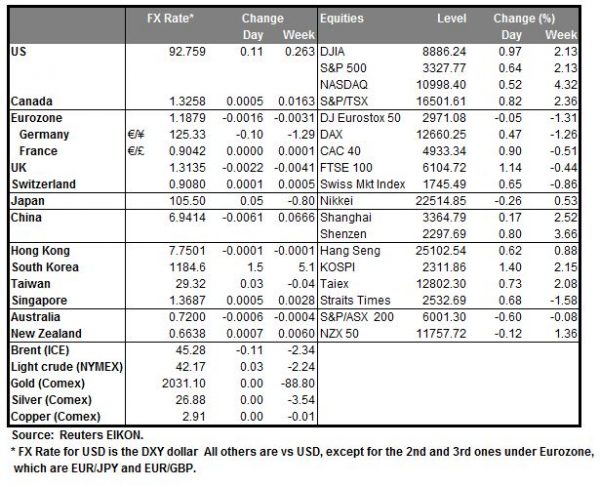 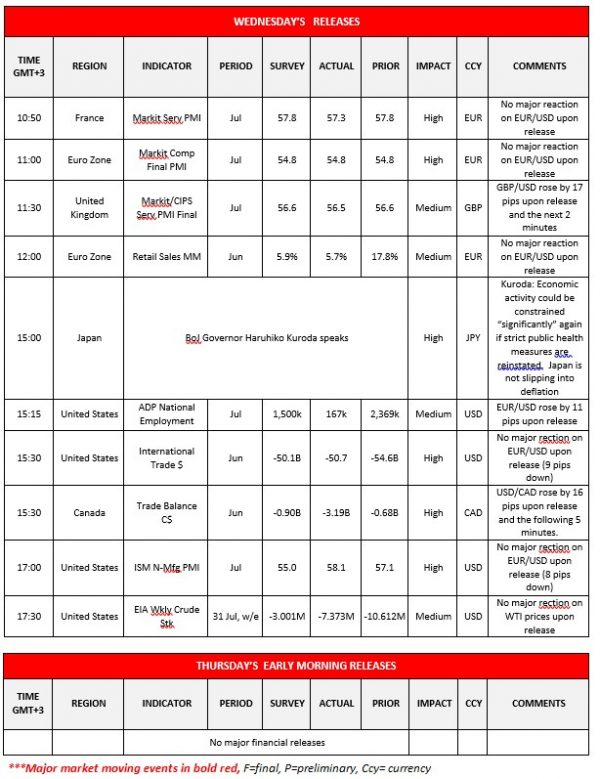