The BoE, in its interest rate decision, kept its key interest rate unchanged at 0.1%, as widely expected. Also, the central bank maintained its buying government and corporate bonds unchanged at £745 billion. The central bank indicated that Britain’s gross domestic product (GDP) will shrink by 9.5% this year, an improvement on the 14% previously predicted and warned of a slower economic recovery.

BoE Governor, Andrew Bailey, stated that the UK economy is picking up as coronavirus restrictions are lifted, however, the pick-up is “very unevenly distributed”. Also, he warned that “some parts of the economy” will not be “viable” after the coronavirus pandemic. Moreover, he stated that central bank sees no immediate case to cut interest rates below zero and unemployment is likely to almost double by the end of this year. On the outlook front, he warned that the economy would take longer to recover from the pandemic previously forecasts.

On the data front, UK’s Markit construction PMI rose to 58.1 in July, recording its fastest pace since 2015 and more than market forecast for a rise to a level of 57.0. In the previous month, the PMI had recorded a reading of 55.3.

Moving ahead, traders would keep a watch on UK’s Halifax house prices for July, slated to release in a few hours. 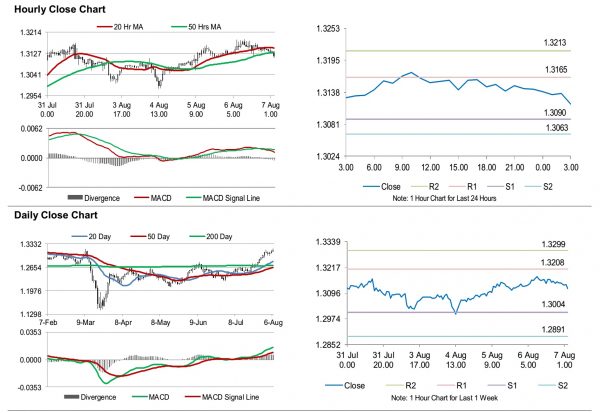