The employment recovery in Canada continued in July alongside further easing in virus containment measures. The 419k increase in employment head-count brought cumulative gains over the last three months to 1.7 million. But that still only retraces a little more than half of the 3 million losses over March and April.

And the pace of improvement from July on is likely to continue to slow – the July employment gain was already less than half the 953k jump in June. Compared to February there were still 274k fewer people working in goods production jobs in July. There were still 309k fewer workers in accommodation and food services, 109k fewer in information, culture, and recreation, over that period – and those services jobs will probably be slower to return with households still sticking closer to home. The recovery in the goods-producing side of the economy will be limited at some point by ongoing weakness in the oil & gas sector.

The unemployment rate fell to 10.9%, down from 12.3% in June and 13.7% in May. But job growth in July was heavily concentrated among part-time workers, and the share of those working part-time involuntarily jumped higher. The drop in employment from a year ago is still heavily concentrated among lower-wage workers. Broader measures of labour market underutilization still improved significantly, on balance, but there is also still a substantial amount of slack in labour markets remaining. We expect employment will continue to recover but job markets, like the broader economy, will still likely be operating well-below capacity by the end of the year. 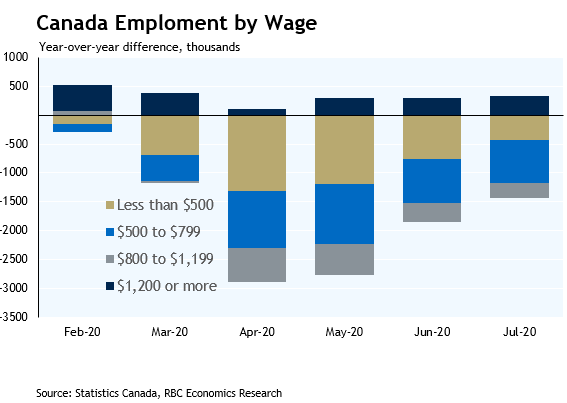 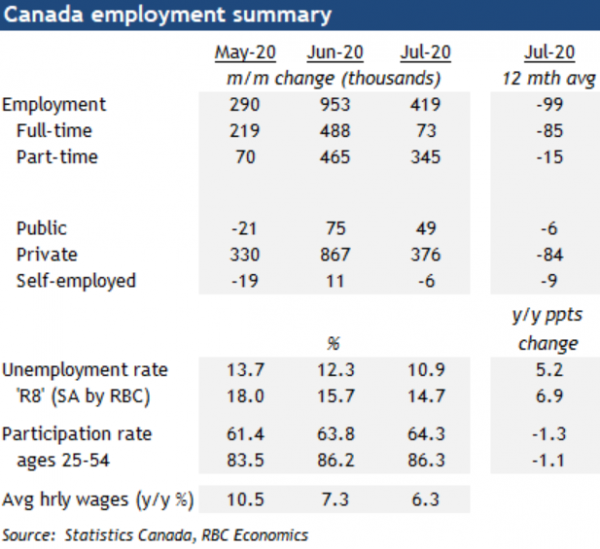